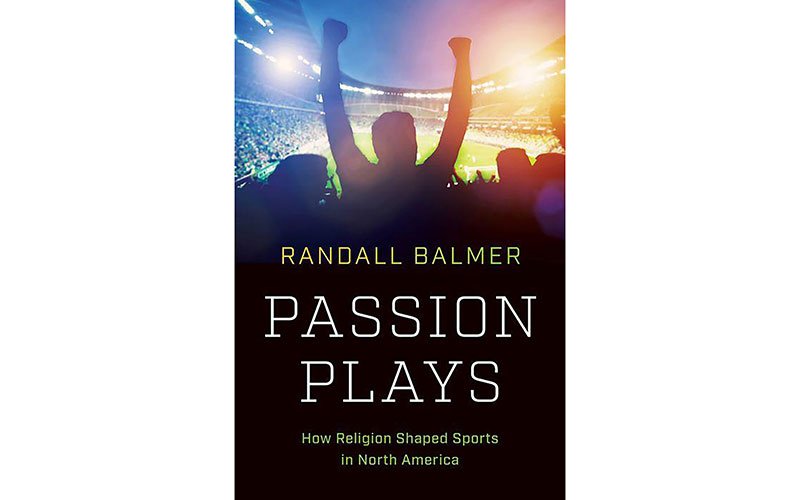 This is the book cover of "Passion Plays: How Religion Shaped Sports in North America" by Randall Balmer. The book is reviewed by Agostino Bono. (CNS photo courtesy The University of North Carolina Press)

The title, “Passion Plays,” gives the impression this book is about medieval morality dramas. Surprise! It’s about sports. As the subtitle notes, the book attempts to show “How Religion Shaped Sports in North America.” Whether it succeeds is a very iffy proposition.

The book’s core is formed by chapters outlining how baseball, football, hockey and basketball have influenced national life and culture in the U.S. and Canada, and vice versa. In this, it does an excellent job.

It shows how baseball in the United States and hockey in Canada were efforts to develop a national sport not tied to games in Great Britain, as a sign of independence from the former colonial power.

It tells how football was developed by Northern soldiers after the Civil War as a way to maintain their combativeness once fighting was over. The sport was quickly adopted by northern universities although some banned it because of the violence. Ironically, once southern universities adopted it and became expert, they were able to beat northern schools, a symbolic revenge for the defeat in the Civil War.

The book explains the importance of these sports in the ethnic and racial integrating of national society, especially in the United States. Baseball was important first for spotlighting European immigrants and their offspring and then for African Americans. But it was not all smooth sailing, even today.

Author Randall Balmer is a professor of religious history at Dartmouth University and has written numerous books on religion and U.S. society. He attributes his tying of religion and sports to listening to sports talk radio programs in New York City where callers were as passionate — or even more so — about sports as they were about religion.

But his effort to see religion as a molding force for sports strikes out. Many of his examples are forced and far-fetched. He equates hockey’s penalty box where players go for committing a foul with the Catholic confessional, where one goes to be absolved from sins. Drinking champagne from the Stanley Cup by players from hockey’s championship team is called reminiscent of the Eucharist.

Regarding baseball, sainthood is like being named to the Hall of Fame. When it comes to relics, a piece of the true cross is like an autographed baseball from the 1920s.

Given the scholarship and interesting tidbits that go into the sports side of the book, one might think Balmer originally wrote it exclusively about sports and then someone convinced him he needed a gimmick to increase sales.

For sports fans, absorb the sports content and skim over the ties to religion. Or, just read them and chuckle.