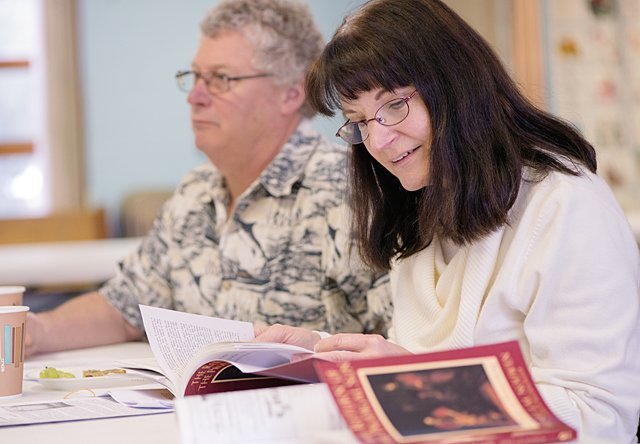 Diana Guilford thumbs through The Return of the Prodigal Son: A Story of Homecoming during a Feb. 21 book discussion at St. Bridget Church in East Bloomfield.

Parishioners around the Diocese of Rochester are discovering a new way to rediscover Jesus this Lent.

Rediscover Jesus is the title of a book by Matthew Kelly that some parishes have chosen to explore through group discussions during Lent. Other books that parishes are reading include The 15 Minute Prayer Solution by Gary Jansen and Forming Intentional Disciples by Sherry Weddell.

Ann Marie Eckert, pastoral associate at St. Catherine of Siena Parish in Ithaca, said the parish has given out books every Christmas and hosted book discussions for the past few years. Since Pope Francis declared this year as the Year of Mercy, the parish decided to offer opportunities for more in-depth spiritual reflections this Lent and suggested that parishioners read Mercy in the City, she added. The book explores how to incorporate the corporal works of mercy — which include feeding the hungry, sheltering the homeless and visiting the sick — into one’s own life, Eckert said.

"We want to understand the mercy God has for us as well as be merciful toward others," she remarked.

The goal is for additional small Christian communities to form within the parish to connect and discuss the book’s ideas, she added, and maybe even be spurred to action.

Eckert said the parish hopes the book discussion will give participants an opportunity to delve more deeply into connections with others in the group.

"And this (activity) might create something that would be a blessing for that group of people for that particular time of Lent," she remarked.

St. Frances Xavier Cabrini Parish received a blessing before Lent even began when a parishioner, who has been recuperating from surgery, offered to buy the parish copies of Rediscover Jesus for anyone who wanted one, explained Father Mickey McGrath, the parish’s copastor.

So before the start of Lent, parishioners were invited to sign up to receive a copy, he explained, and the parish ordered more than 70 copies in English and 50 in Spanish.

As with Mercy in the City, the book is easily digestible, as it is written in a conversational way and offers 40 short chapters with questions to ponder and a biblical verse for every day of Lent, Father McGrath said.

"If a small number of people really get a lot out of it, it’s worthwhile," he remarked. "The book is something they can also go back to."

To encourage fellowship and sharing within the parish, the book will be discussed during weekly soup suppers to help parishioners discover what the book is saying to them as individuals and for the faith community, he added.

"(Author Matthew Kelly) wants to get people to discover more about who Jesus is; what his message is for me as an individual. What is his message for us as a church?" noted Father McGrath. "At the end of the day, what does it really mean to be a disciple for Jesus? He’s come to liberate us (but also) sends us on a mission."

As he discovered from the positive feedback he received from a series on Catholicism last year, people crave ways to deepen their faith, Father McGrath noted.

"We need to feed the people," he said. "People are hungry for opportunities to learn and grow."

That website is what led Kathy DeMass and Susie Gallo from Catholic Community of the Blessed Trinity in Wolcott, Red Creek and Fairhaven to Rediscover Jesus. They chose to read the book as a continuation of a small book club that formed last year, said DeMass, who serves on the parish’s pastoral council and stewardship committee. Members of the group have read several books this past year, she added.

She hopes the group will grow during Lent. The club has planned weekly discussions where members were to read portions of the book aloud together and reflect on what they read, she said. She and Gallo had ordered about 40 books for those interested in taking part in the Lenten reading group.

"This book is an invitation to encounter Jesus in our lives because what we need more than anything is to know Jesus," DeMass noted. "I hope that this book brings us into a deeper and more intimate relationship with Christ."

Participating in such a spiritual activity also helps parishioners continue on that path to developing a personal relationship with God, added Maureen Gallagher, a member of the Living Faith committee at St. Benedict Parish. The parish chose to read The Return of the Prodigal Son: A Story of Homecoming by Henri Nouwen and is hosting discussions at its worship sites in Canandaigua and East Bloomfield, she said.

"I think people are really enjoying the discussion," Gallagher added. "It brings about a different mind-set because people read a book with their own emotional and spiritual baggage through their own filters. … It expands your horizons, which has been helpful."