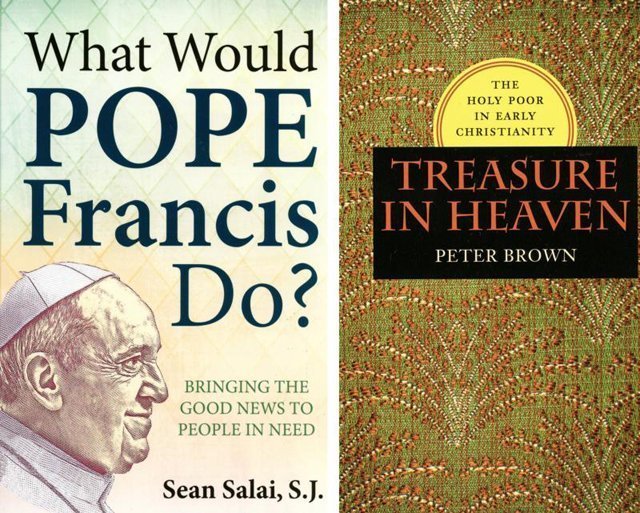 These are the covers of "What Would Pope Francis Do? Bringing the Good News to People in Need" by Sean Salai, SJ and "Treasure in Heaven: The Holy Poor in Early Christianity" by Peter Brown. The books are reviewed by Rachelle Linner.
"What Would Pope Francis Do? Bringing the Good News to People in Need" by Sean Salai, SJ. Our Sunday Visitor (Huntington, Indiana, 2016). 144 pp., $14.95.
"Treasure in Heaven: The Holy Poor in Early Christianity" by Peter Brown. University of Virginia Press (Charlottesville, Virginia, 2016). 192 pp., $22.95.
Jesuit Father Sean Salai provides a lot of information in "What Would Pope Francis Do?" — a relatively short but well-written book that is particularly suitable for young Catholics. Six thematic chapters (on longing, closeness, dignity, weariness, tenderness and Mary) reflect on Pope Francis’ teachings from his 2013 exhortation, "Evangelii Gaudium" ("The Joy of the Gospel").
Father Salai is particularly good in explaining how Jesuit formation shaped Jorge Mario Bergoglio and how the lifelong practice of Ignatian spirituality has influenced his papacy. Father Salai does this, in part, by reflecting on his own experiences as a Jesuit seminarian, his work as a teacher, his ministerial assignments (teaching, visiting prisoners and nursing home residents, living in a L’Arche community) and his growing sensitivity to the poor and marginalized.
He writes honestly and doesn’t pretend to a sophistication he hasn’t achieved, particularly in narrating his encounters with Ashley, a homeless woman he met during a summer assignment in New York.
Father Salai clearly loves being a Jesuit and seems free from clericalism, but he writes as if his experiences were normative. He doesn’t seem to recognize that, by virtue of his Jesuit identity, his way of being with the poor is radically different than what a lay Catholic would experience. This blind spot does not negate the strengths of the book — it is a fine introduction to Pope Francis and his charism — but limits its ability to serve as a road map for "bringing the good news to people in need."
Care of the poor and the different responsibilities of clergy and laity have been an issue in Christianity since its founding days.
Peter Brown, a renowned historian of late antiquity, explores these issues in "Treasure in Heaven: The Holy Poor in Early Christianity." It is an erudite work of scholarship that is beautifully written and accessible to the lay reader. In this brief book, Brown successfully conveys the context of the first four centuries of Christianity, from St. Paul to the rise of monasticism.
He opens with an analysis of the tension between Jesus’ blunt directive to the rich young man — to sell all he has and give to the poor so as to have "treasure in heaven" — and St. Paul’s admonition to support the poor among the saints. "Christians faced two problems: how to remember the poor through religious giving, and how to pay for their own religious leaders."
How would the church support the poor of their communities without imposing the expectation of reciprocity that governed gift giving? Eventually, the solution was to have bishops distribute alms, thus insuring anonymity and reflecting increasingly clerical and centralized church structures.
The "holy poor" — those who devoted themselves to religious life and work — grew with the development of monasticism. There were significant differences between the monks of Syria and those of Egypt. (Egypt and Syria were broad geographic areas, much larger than the boundaries of the two nations that bear those names today.)
Syrian monks were supported by the alms of faithful laity. Labor, not sexuality, was central to their theology of the fall. "(T)he human race had fallen into work. … What mattered was that Adam and Eve had rebelled against God by wishing to exercise God’s power over the land." Monks, free from labor, were able to live "a life of perpetual rapt worship."
In contrast, the classic image of Egyptian monasticism was the one presented in St. Athanasius’ "Life of Anthony": the working monks who not only supported themselves but were able to give alms to the poor. "In claiming to live from the labor of their hands, the monks of Egypt asserted … that they were not above the ‘mass of men.’ They were not ‘angels.’" They bequeathed to us "a model of society divided between rich and poor, in which the rich have a religious and a moral duty to support the poor."
The issues so lucidly addressed in "Treasure in Heaven" are still with us today, which is why it is such an important and valuable book. It can help the reader understand the urgency of Pope Francis’ religious imagination and it provides theological depth to timely and important questions of justice.
– – –
Linner, a freelance writer and reviewer, has a master’s degree in theology from Weston Jesuit School of Theology.
Copyright © 2022 Catholic Courier, Inc. All rights reserved. Linking is encouraged, but republishing or redistributing, including by framing or similar means, without the publisher's prior written permission is prohibited.