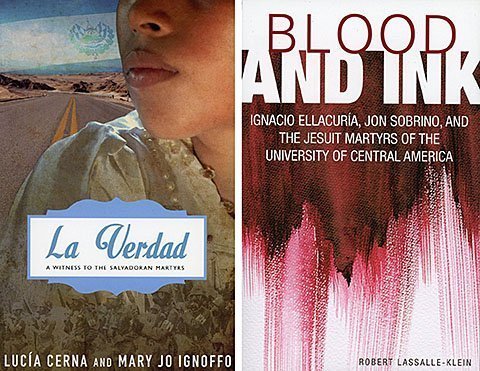 "La Verdad" and "Blood and Ink" revisit the brutal assassination of six Jesuits in El Salvador in 1989.

"La Verdad" and "Blood and Ink" mark the 25th anniversary of the brutal military assassination of six Jesuits in El Salvador, revisiting the case from different but converging perspectives.

Both share the same overall conclusions and make convincing cases for calling the six priests martyrs as the social commitment that made the Salvadoran military consider them subversives and terrorists sprang from their deep faith. Murdered with the priests were Julia Elba Ramos, their cook and housekeeper, and her 16-year-old daughter.

Neither book provides new facts. Decades ago, even Salvadoran and U.S. government officials admitted that the executions were done by an elite U.S.-trained battalion. But the books offer a profound Catholic context for what happened and provide perspective for judging a very difficult period in Latin American church history.

Although the assassinations occurred as the Cold War was evaporating elsewhere with the breakup of the Soviet Union’s empire in Eastern Europe, it was still alive and well in Latin America. During the Cold War many Latin American countries were ruled by U.S.-supported right-wing governments meant to prevent Marxism’s spread in the United States’ backyard.

These governments developed what became known as the national security state, a governing system in which human rights, civil liberties and the formation of stable democratic institutions took a back seat to an anti-communist mindset that considered subversive almost anyone criticizing their government or questioning the huge social, economic and political inequities in society.

A main result in this heavily Catholic region was the political assassination of many priests, religious and laypeople whose social and pastoral work was guided by the Gospel values rather than Marxist ideology or a Communist Party’s political program. The vast majority of these assassinations were done by government security forces.

Within this context, six Jesuit priests were dragged from their residence at the University of Central America in El Salvador in the early morning hours of Nov. 16, 1989, and brutally murdered. Ramos and her daughter, Celina Mariset, who had stayed overnight at the residence, were both eliminated by the killers so as to leave no witnesses.

The Jesuits were university professors and administrators who felt the university had to do more than educate the children of the elite. As the books point out, they were inspired by a 1968 call from the Latin American bishops for the church to become the "voice of the voiceless."

They wanted the university to grapple with the reality of a country where the majority of the population was poor and marginalized. So the school started job training programs, did sociological surveys that tapped the views of the entire population, organized public forums to discuss national issues and even made efforts to mediate peace between the government and leftist guerrillas fighting a civil war.

Of the two books, "La Verdad (Spanish for "the truth") is the easier read. It tells the moving story of Lucia Cerna, who also was a housekeeper for the Jesuits and who saw the 1989 events from a building next to the residence. She, her husband and 4-year-old daughter stayed the night because it was dangerous to return to their home in a neighborhood where the military and guerrillas were fighting. Although she didn’t see the actual killings, she heard the screams of the Jesuits and the shots and saw soldiers jubilantly surrounding the dead bodies.

After giving sworn testimony in El Salvador, she was whisked to the United States for her safety only to be pressured for several days by FBI agents to change her testimony incriminating Salvadoran soldiers. Supplementing Cerna’s story is Mary Jo Ignoffo, history professor at De Anza College in Cupertino, California. She provides the historical, political, socioeconomic and theological background to the narrative.

"Blood and Ink" mixes retelling the event with a scholarly treatise about the theological underpinnings of the UCA Jesuits. Robert Lassalle-Klein, associate professor of religious studies and philosophy at Holy Names University in Oakland, concentrates on the writings of Father Ignacio Ellacuria, university president, who was killed, and Father Jon Sobrino, well-known theologian, who escaped death as he was out of the country on a speaking trip.

The author shows how the two developed their own nuances to liberation theology and saw in the poor and oppressed Salvadorans the face of Christ and regarded them as a crucified people needing to be taken down from the cross.