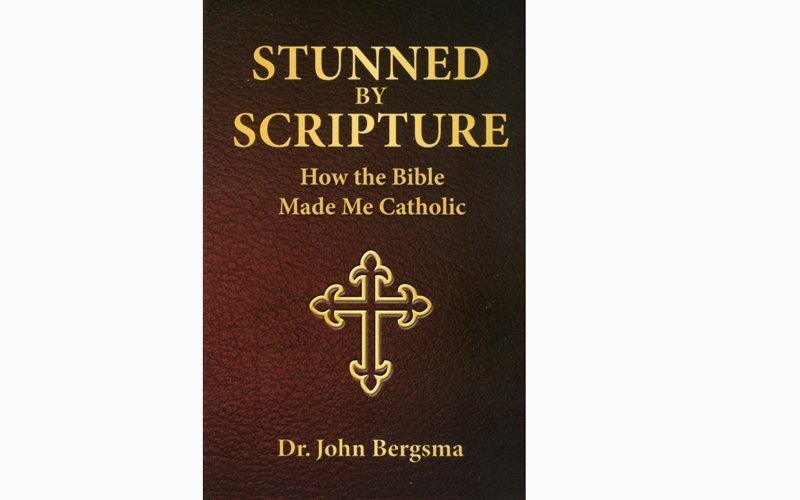 This is the cover of "Stunned by Scripture: How the Bible Made Me Catholic" by John Bergsma. The book is reviewed by Eugene J. Fisher. (Photo by CNS)

These two books represent spiritual journeys. Evans migrates from evangelicalism to the Episcopal Church, Bergsma from a Baptist to a Catholic.

Of the two, Evans’ book delves more deeply into the Scriptures, delightfully retelling and probing the meaning of the Bible and its wonderful array of reworked ancient myths, oral traditions, songs, wise sayings and history.

The Bible does not hesitate to critique, through the teachings of the Hebrew prophets, both the people of Israel and its leaders. Whereas other ancient chronicles represent themselves and their leaders as essentially perfect, David is an adulterer and murderer, Solomon a promoter of idolatry, etc. This is why the Bible speaks to us so forcefully, for we, too, are flawed humans trying our best to live the word of God.

Evans makes good use of Jewish understandings of the Bible and of the first century. She notes that “while Christians tend to turn to Scripture to end a conversation, Jews turn to Scripture to start a conversation.” She shows that interpreting the Bible is not a “zero-sum game” but rather inspires “endless insights and challenges,” which is how Jesus and the authors of the New Testament, all Jews, understood the only Bible they knew.

Bergsma looks at the Bible as a proof text for why one should be a Catholic rather than a Protestant. He presents accurately the Catholic understanding of key passages foundational for our belief in the papacy, the role of Mary, priesthood, the sacrament of reconciliation, the Eucharist and tradition. These discussions can be helpful for lay Catholics seeking to understand the biblical basis of Catholic teachings.

I would, however, suggest that Catholics reach out to Protestants in ecumenical dialogue, since at times Bergsma oversimplifies their beliefs to make his otherwise valid points. I was for a quarter of a century the staff person for the U.S. Conference of Catholic Bishops’ ongoing dialogue with Presbyterian/Reformed Christians and know firsthand that their views are in fact deeper than they may appear in this book.

Likewise, Bergsma seems unaware of the progress in Catholic-Jewish dialogue that has taken place since the Second Vatican Council, as I can again testify as the staff person for that dialogue for the bishops for 30 years.

Bergsma states, erroneously, that “Israel never embraced the promised royal priesthood,” ignoring the rich traditions of rabbinic Judaism. He presents Jesus as opposed to “the” Pharisees who, he wrongly states, were “legalist” and who sought “to burden people with obligations, obscuring the free gift of God that is salvation.”

This negative depiction of “the” Pharisees ignores the fact that there were two major groups of Pharisees in Jesus’ time and that Jesus consistently sided with the more lenient followers of Hillel, who sought to embody the spirit of the law/teaching, as opposed to the more rigorous followers of the Jewish scholar Shammai. Again, had Bergsma read the official statements of the Holy See since the council and the literature of Catholic-Jewish dialogue, he would have avoided such errors.

All in all, I would highly recommend Evans and recommend Bergsma with the caveats outlined above.

Fisher is a professor of theology at St. Leo University in Florida.