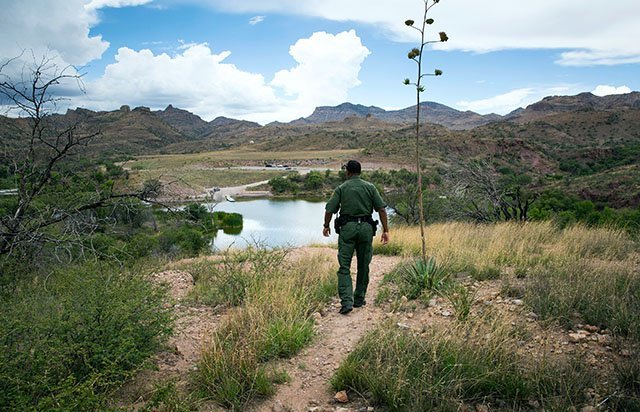 NOGALES, Ariz. (CNS) — A shirtsleeve waved from the top of the border fence like a signal flag.

Flowers has a keen eye for spotting signs of people on the move. He can make out fresh footprints in the dry desert sand and easily spot newly discarded water bottles, backpacks or clothing.

A former teacher, he is among the 4,100 agents in the Tucson sector of U.S. Border Patrol charged with security along 262 miles of linear border extending from Arizona’s Yuma County to the New Mexico state line. 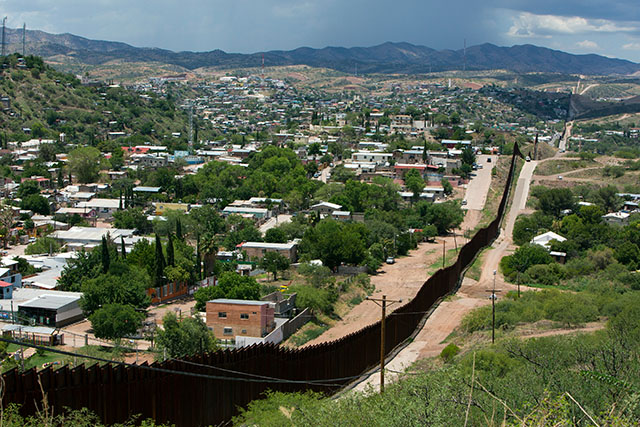 The international border fence snakes along hills in this July 16 view from east of Nogales, Ariz. Nogales in Sonora, Mexico, is more densely populated than that of its U.S. sister city.

The agents make daily arrests. Among those taken into custody are people looking for a better life, those seeking jobs or to be with family and hardened criminals, including drug smugglers, human smugglers and traffickers.

"This border area is safer today than it’s ever been," he said, outlining infrastructure improvements the agency has made over the last decade.

Upgrades in fencing, roads and monitoring technology, as well as an increase in the number of agents, have helped reduce the number of apprehensions made in the Tucson sector. 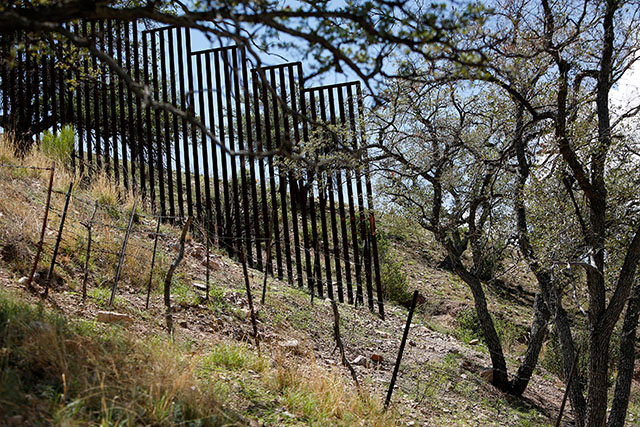 The end of steel-slat fencing is seen in this July 16 photo of a remote area west of Nogales, Ariz., along the Arizona-Mexico border. A more rudimentary barrier made of barbed wire can be seen in the foreground. When politicians talk about improving or adding fencing along the border, they often cite as an example this type of barrier.

Even as apprehensions are down from an all-time high of more than 600,000 in 2000, the sector remains one of the Border Patrol’s busiest regions.

Last year it took into custody 120,939 people, nearly 29 percent of all Border Patrol apprehensions that year.

The Tucson sector also seized more than 1.1 million pounds of marijuana in 2013, accounting for nearly half of all the marijuana confiscated by Border Patrol the same year.

Just before 11 a.m. July 17, the patrol’s Nogales station was processing more than 20 people — including women and children — arrested by agents a few hours earlier.

Unlike the Texas Rio Grande area, Arizona’s southern border did not experience an uptick in apprehensions of unaccompanied minors over the last reported year. The number of family-unit apprehensions in the Tucson sector for the same period did increase from 2,130 to 3,117. (A "family unit" is defined as a child or children accompanied by one or both parents).

In June and July, the Border Patrol’s Nogales station temporarily housed hundreds of undocumented children who had been apprehended in the Rio Grande sector. 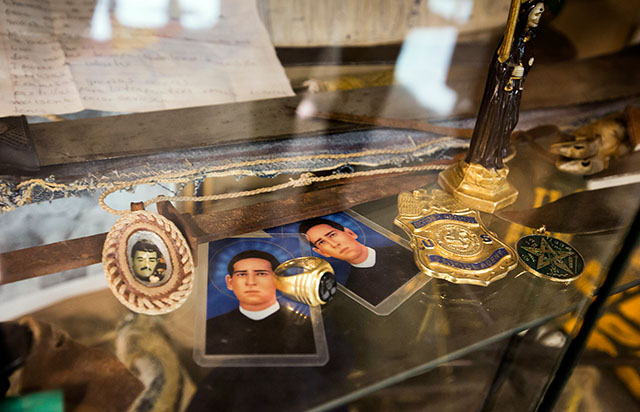 Bishop Gerald F. Kicanas of Tucson said he and other community leaders continue to converse with Border Patrol about the treatment of people in its custody. Most recently the focus has been on the unaccompanied children, who he said need pastoral and social services and legal representation.

Border Patrol is "trying to be as sensitive and as helpful as possible in situations that are very challenging," he said. "However, we are asking that they be open to letting the community be helpful in caring for the spiritual needs of these children."

The bishop said he had asked permission to celebrate Mass for children at the Nogales station, but his request was denied.

Bishop Kicanas also said there is still much concern about a 2012 Border Patrol shooting incident that left a Mexican teenager dead on the Sonoran side of the fence near Nogales. An agent or agents reportedly shot several times through the border fence as rocks were being thrown at them.

"I believe there has never been a full report or accounting of the circumstances of that shooting, which has left the family very concerned and anxious," Bishop Kicanas said. "We have to keep an open dialogue about such cases."

"When you have as many Border Patrol agents as there are in the Tucson sector, it’s very difficult to make certain that all of them are following all the directives and rules and that they treat everyone with dignity and respect," Bishop Kicanas said.

At the same time, he added, it’s also helpful for those in the community to be mindful that agents are law enforcement people, not health care or social workers. 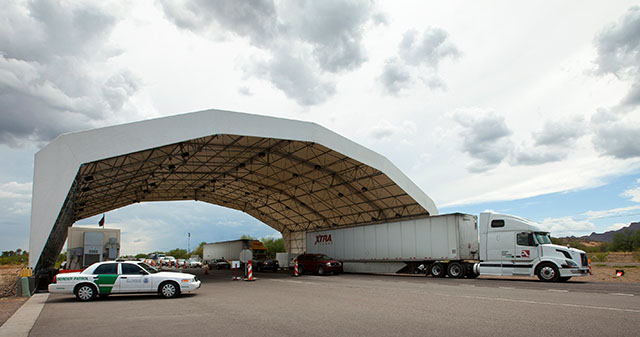 A tractor-trailer passes through the U.S. Border Patrol checkpoint along Interstate 19 near Tubac, Ariz., July 16. The checkpoint is located about 25 miles north of the U.S.-Mexico border.

Flowers said that although Border Patrol agents’ first responsibility is to secure the border, they do show compassion and care for the individuals in their custody.

"I am not here to judge them," the agent said. "I’m just here to enforce these laws."

Even as Border Patrol bolsters its abilities to keep criminals from sneaking into the U.S., it witnesses breaches every day.

The Tucson sector reported that in early July alone its agents had seized five vehicles, more than $1.1 million in narcotics and apprehended 23 people in connection with criminal cases. 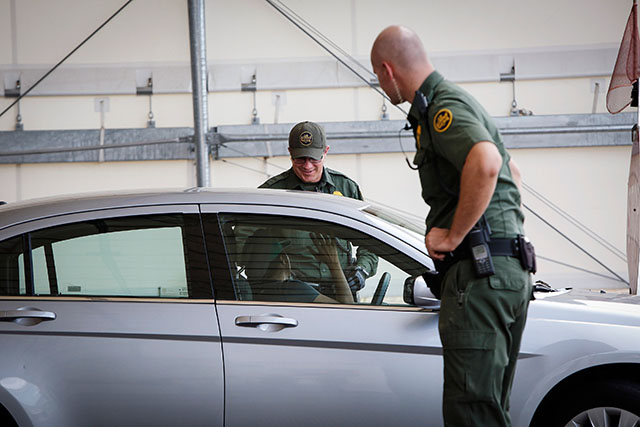 A driver talks with an agent at the Interstate 19 U.S. Border Patrol checkpoint near Tubac, Ariz., July 14.

Flowers said criminal elements have means to monitor Border Patrol from Mexico and inside the U.S., and they employ a host of tactics, including violence, to distract or intimidate agents.

And does fencing help in the overall border security strategy?

Fences serve mainly as obstacles to those who are determined to make it over, said Flowers.

"Fencing is not necessarily going to stop a person from entering the country," the agent said. "You can’t stop a person’s will to cross if that’s what they’ve decided to do. People will try to go over, through or even under any fence."

Fencing does provide more time for agents to respond to illegal crossings. But it’s only one facet of Border Patrol’s overall plan to deter, detect and identify unlawful activity, Flowers said.

"There is no one-fix solution to keeping our borders safe." 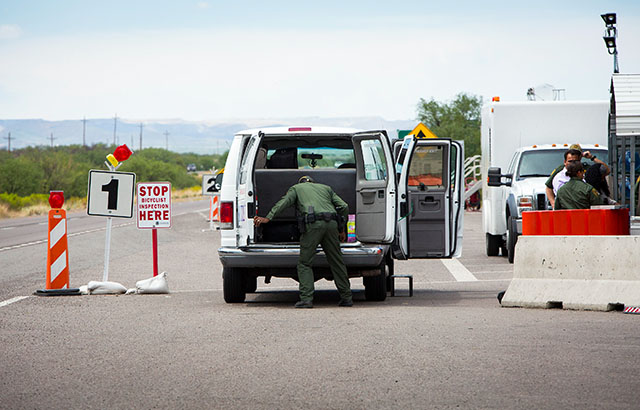