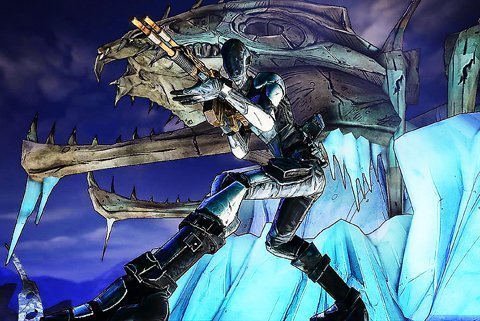 NEW YORK (CNS) — Classic tales of good guys voyaging across a desolate and destroyed landscape to battle an evil overlord are common in books and movies as well as in video games.

This familiar plot once again plays out in the first-person shooter "Borderlands 2" (2K Games).

Our heroes — Vault Hunters — are tasked with rescuing the land of Pandora from the game’s master villain, Handsome Jack. Jack intends to revive a creature called the Warrior who would wreak havoc if unleashed.

Journeying through Pandora, players can team up with friends in a co-op. As the Vault Hunters work their way toward the epic clash with Handsome Jack, they encounter and collaborate with many interesting personalities who help give the game depth and enhance the story. Additionally, the game presents multiple side missions which provide further diversion.

As players gain experience, more and more items can be found which allow them to develop their skills through various tech trees and careful item selection. Along the way, however, they collect "loot," which primarily consists of guns, guns, and more guns.

By contrast to other first-person shooters, the "cel shaded" graphics of the game are in the comic book vein, which at least prevents the battlefield animations from coming across as overly realistic. Yet there are several morbid scenes that include dead bodies or bodies on stakes. And the game still retains a high level of gore.

The settings do include a censor mode which turns off "blood, guts and dismemberments" and this setting does clean up the violence. Unfortunately, the censor mode fails to rectify other problems.

The varied characters gamers encounter consistently spout profane and crude phrases, and dabble in sexual innuendo. The few women characters are scantily dressed, suggest extramarital interactions, and often use inappropriate language themselves. The boorish dialogue and degraded depiction of women detract from the relatively intriguing story and from the game’s other virtues.

The distorted values underlying the narrative are embodied by a character called Claptrap — a chirpy little steward bot who acts as the player’s companion. He initially reminds gamers that at least some of the enemies they are liquidating are human beings with lives and families. But he then immediately reverses himself with the assurance that he’s only joking — and the slaughter continues.

Played for review on the Xbox 360; also available for Playstation 3 and PC download.

The game contains warped values, excessive violence, a demeaning portrayal of women, frequent use of profanity, much rough and crude language and suggestive sexual talk. The Catholic News Service classification is O — morally offensive. The Entertainment Software Rating Board rating is M — Mature.