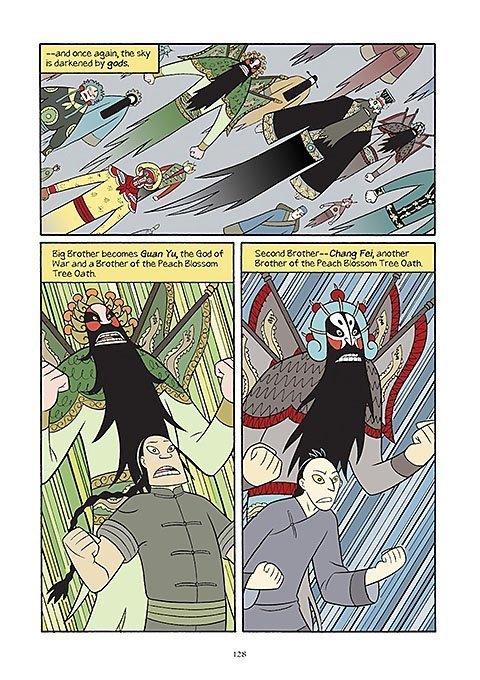 This is a page from the comic book "Boxers & Saints." The Catholic News Service classification is A-II -- adults and adolescents.

Author Yang is a practicing Catholic who teaches computer science at Bishop O’Dowd High School in Oakland, California. But "Boxers & Saints" is more than simple cartoon evangelization. It’s a subtle and colorful work that keeps the faith while acknowledging that sometimes there are no easy answers in life.

No surprise, then, that "Boxers & Saints" has just been awarded the Los Angeles Times Book Prize for Young Adult Literature.

Yang’s subject is the Boxer Rebellion, the anti-foreign, anti-Christian movement that roiled China from 1898 to1900. "Boxers," the first volume in the set, tells the story of Bao, a young man who becomes a leader in the uprising.

"Saints," by contrast, is the tale of Four-Girl, a young woman who has visions of St. Joan of Arc, becomes a Catholic and adopts the name Vibiana. The two characters ultimately come face to face on opposite sides of the political and religious divide.

There is no sexual content in "Boxers & Saints," but there is violent action. Yet Yang’s art is very simple, the lines very basic — something on the order of a marginally more sophisticated version of "Peanuts." Additionally, Yang’s depiction of violence is always driven by events and never involves gratuitous gore.

Though clearly not meant for young children, "Boxers & Saints" could be a very useful teaching tool, both for teens and for those adults who may not be familiar with the period in which it’s set.

While living with his family in the small Chinese village of Shan-tung (Shandong in real life), Bao meets Red Lantern Chu, an itinerant kung fu master. After Red Lantern is executed by the imperial army, Bao forms a small armed band to march on Peking and take control of China back from Christian missionaries and their Chinese sympathizers.

During the rebellion, official China was split between those who supported the Boxers and those who favored conciliation. Thus Bao and his fellow warriors are often unsure which side any given person is on.

They draw strength from Chinese gods and dislike Christians — both Chinese ones, whom Bao calls "secondary devils," and those from the West. A Catholic priest, Father Bey, is shown smashing an idol and demanding that the villagers worship "the one God, Jesus Christ."

Yet in "Saints" Yang shows the other side of the conflict. Four-Girl — who received her unusual moniker because her family couldn’t bear to give her a proper name after three other children died in infancy — is subjected to multiple misfortunes. She’s called a devil by her grandfather, physically assaulted by family members, and driven from her home.

Retreating into the woods, Four-Girl encounters a vision of Joan of Arc, another strong young woman. St. Joan convinces Four-Girl to convert to Catholicism. Now called Vibiana, she is schooled and helped by Father Bey.

As they both approach Peking, Bao and Vibiana are on a collision course. The outcome should be left to readers, but this much can be said without fear of a spoiler: The conclusion is realistic, understated and moving.

The Catholic News Service classification is A-II — adults and adolescents.