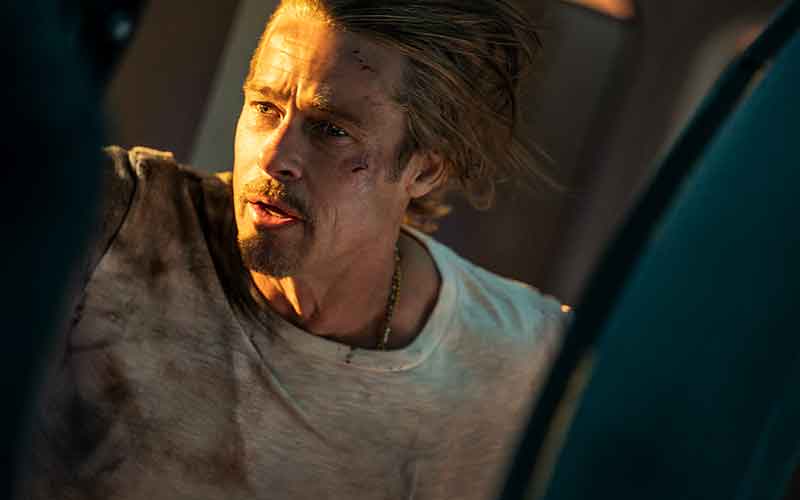 NEW YORK –  What kind of a ride can viewers expect on “Bullet Train” (Columbia)? Though complex, clever and quick-paced, director David Leitch’s action comedy is also blood-soaked. As penned by Zak Olkewicz, moreover, this screen version of Kotaro Isaka’s 2010 novel simultaneously revels in and trivializes the increasingly nasty violence with which it’s stuffed.

Brad Pitt plays a hitman with the unlikely codename Ladybug (an ironic moniker based on his perpetual bad luck). Intent on reforming himself by avoiding murder in the future, he turns instead to theft, accepting a mission from his handler, Maria (Sandra Bullock), to nab a briefcase stuffed with cash off a high-speed train traveling from Tokyo to Kyoto.

Ladybug finds his resolve to avoid causing fatalities put to the test, however, once he discovers the presence, among the other passengers, of an array of less-sensitive assassins, all working at cross purposes with him.

They include British partners Tangerine (Aaron Taylor-Johnson) and Lemon (Brian Tyree Henry) as well as the Prince (Joey King), a seemingly vulnerable young woman whose innocent appearance belies her viciousness. (The latter’s nickname turns out to be a sarcastic comment on her father’s favoritism toward her older brother.)

In between the harsh showdowns in which the killers engage as they struggle for possession of the loot, we’re treated to some humorous verbal exchanges. Influenced by his analyst, Ladybug likes to dispense hackneyed – and unwanted – psychological advice while Lemon has learned all his life lessons from watching “Thomas & Friends,” the animated series centered on Thomas the Tank Engine.

But soon it’s back to the escalating mayhem. In addition to being shot, characters are poisoned in a way that makes blood rush out of their eyes and decapitated as they fight on the roof of the speeding vehicle. And these deaths are treated both as comic fodder and as a source of freewheeling excitement.

A more restrained depiction of the bloodletting inherent in the story might have made it acceptable for grown-ups. As it is, this slick but morally careless picture soon goes off the ethical tracks.

Look for: A high-gloss production and witty dialogue. Look out for: Excessive gory violence, gruesome images, pervasive vulgar language, a few profanities, some premarital sensuality and sexual humor. The Catholic Moviegoer’s guidance is U – unsuitable for all. The Motion Picture Association rating is R – restricted. Under 17 requires accompanying parent or adult guardian.

Formerly a staff member for Catholic News Service, Mulderig has been reviewing visual media from a Catholic perspective for 15 years. His column is syndicated by Catholic Review Media. Follow his reviews on Twitter @CatholicMovie.