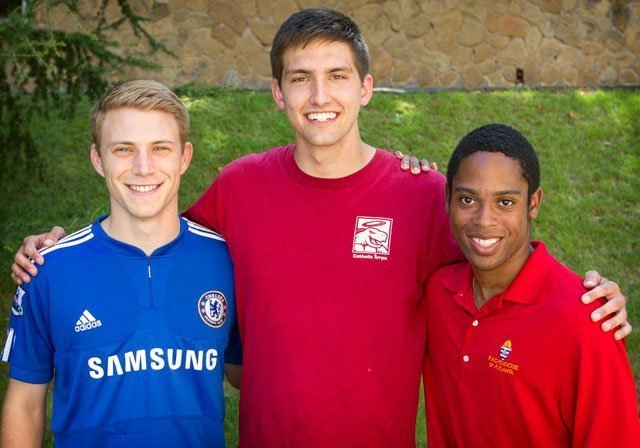 VATICAN CITY (CNS) — As ZZ Top’s "Sharp Dressed Man" bellowed across an immaculately groomed sports field not far from St. Peter’s Basilica, a new class of U.S. seminarians faced off against their peers in a fraternal game of softball.

The onlooking fans, who included Vatican officials and seminary staff, said they perceive God’s providence in the starting lineup of 72 men who are beginning their studies at the Pontifical North American College, the U.S. seminary in Rome.

Seeing so many new seminarians "gives us the security that good things are happening in the church," said Mexican Archbishop Jorge Patron Wong, secretary for seminaries at the Vatican Congregation for Clergy.

"When I see the new class of North American seminarians," he said, "I see the presence of God, the presence of the love of God." The men are signs that "God loves so much the church, humanity and especially the United States" that he is leading many young people to "experience the call of Christ to give their lives to others."

Archbishop Patron spoke to Catholic News Service in late August on the sidelines of the softball game as innings changed over and the music of Aerosmith and Bruce Springsteen reverberated over the loudspeaker.

Having grown up in a secular country, the young men’s willingness to follow a vocation to priesthood shows they "really want to give a profound sense to their life," Archbishop Patron said.

The "new men," after having spent six weeks intensively learning Italian outside the capital, are given time in August to get to know their brother seminarians.

"There are different age groups, different professions," said Msgr. James F. Checchio, the seminary rector. There are "two medical doctors in the group, there are (a) couple lawyers who practiced before they came, and then just all kinds of good young men giving their lives to the Lord."

Most who are sent to the seminary make it to ordination, he said. Out of the total enrollment, which this year is 252 men, only eight or nine leave each year, he added. Half of those who leave go back to seminaries in the United States and the others "discern out" of a vocation to the priesthood.

"Many men when they come here are pretty certain, and I think that’s why the bishops trust them, send them overseas," Msgr. Checchio said. "So it’s a blessing for us. It gives us great soil to work with."

Msgr. Checchio, who has been on the staff of the seminary since 2003 and rector since 2005, has guided men to the priesthood under St. John Paul II, Pope Benedict XVI, and now Pope Francis, who is making his own mark on this generation of seminarians.

"The men are very conscientious of his emphasis on the poor, and reaching out to the poor," Msgr. Checchio said.

Avery Daniel, a 22-year-old from the Archdiocese of Atlanta, initially discerned his vocation during the pontificate of Pope Benedict. The election of Pope Francis has greatly affected his understanding of the priesthood, he said.

For 21-year-old Andrew Auer of the Archdiocese of St. Louis, Pope Francis influenced his thoughts also about life in the seminary.

"One line that I always have to hearken back to and has been very challenging to me and I think a lot of other seminarians," Auer explained, is when Pope Francis said, "seminarians are not to be princes of the church," but rather servants of the church.

Joe Cwik, 23, from the Archdiocese of Washington, said seminarians have many opportunities to minister to the poor and sick.

"Some of us go to college campuses and work, others to nursing homes, visiting the ill and the sick and the homebound," Cwik said. "Our Holy Father is spearheading this effort," Cwik said, "really reaching out and helping those who need it the most."

"The example of Pope Francis, following Christ in the way the Blessed Virgin Mary did it is very clear for us," he said. "To say yes, yes to Christ, yes to the church and do it joyfully, I find those characteristics in the North American seminarians of today."