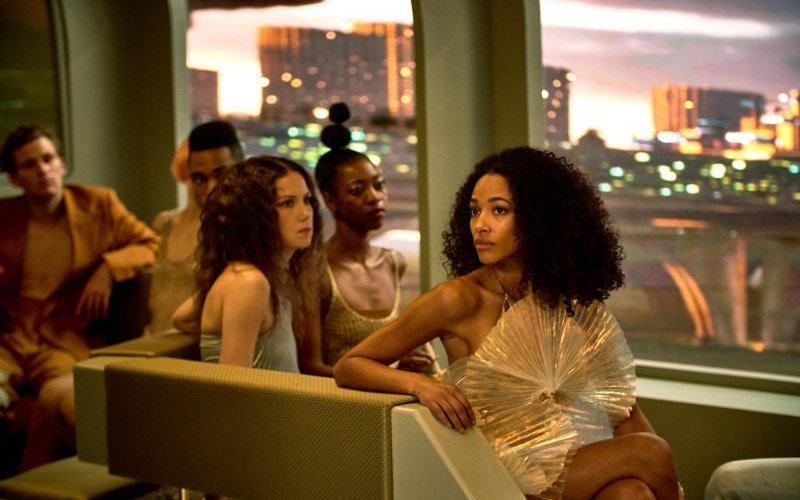 This is a scene from "Brave New World" streaming on Peacock. (CNS photo by Steve Schofield/courtesy Peacock)

NEW YORK (CNS) — “Brave New World,” the acclaimed novel by Aldous Huxley, has been adapted multiple times for radio, film and television since it was first published in 1932. The latest version, an ambitious nine-part miniseries, is streaming now on NBC’s new Peacock streaming service.

Fans of the dystopian tale will be sorely disappointed. Despite fine acting and superb production values, this “Brave New World,” built by a small army of directors and writers, bears only the slightest resemblance to its source material.

If it’s been a while since your high school English class, here’s a primer: Huxley’s book is a satirical indictment of some of the major trends of his day, including communism, fascism, consumerism, rapid industrial growth and an emerging mass culture.

The setting is a post-apocalyptic world-state based on three principles: community, identity and stability. Humans are conceived in a lab and predestined to serve in one of five castes, each named for a letter of the Greek alphabet. Alphas are, naturally, the elite; Epsilons take out the garbage.

In this “utopia,” there is no individuality or personal freedom. Happiness and order are maintained through consumption of a euphoric drug named soma. Promiscuity is encouraged, as everyone “belongs” to everyone else (contraception is a given).

Lenina Crowne (Jessica Brown Findlay) is a Beta-Plus who works in the human hatchery. When not injecting embryos with programming, she services the sexual needs of interested Alphas. But Lenina, unlike her fellow Betas, yearns for something more than the conformity offered in the city of New London, where the three rules are: No privacy. No family. No monogamy.

She agrees to join a thoughtful Alpha-Plus, Bernard Marx (Harry Lloyd), on a field trip to the Savage Lands, a kind of amusement park filled with nonconformists (“savages”) who present titillating demonstrations of such arcane (and unacceptable) practices as marriage, family and religion.

This “Brave New World” goes off the rails (and the track of the book) when, for no apparent reason, the savages embark on a shooting spree, slaughtering most of the visitors. Lenina and a wounded Bernard are rescued by two kindly natives, John (Alden Ehrenreich) and his mother, Linda (Demi Moore).

The quartet barely escapes the Savage Lands with their lives. Returning to New London with two wild creatures in tow, Bernard and Lenina have some explaining to do.

“Brave New World” unfolds as Bernard and Lenina struggle to return to their ordered lives, while John, in particular, copes with sudden celebrity and a foreign lifestyle. His disruptive influence worries the enigmatic world-controller, Mustafa Mond (Nina Sosanya).

John is presented as a brooding James Dean type, a rather boring rebel with no particular cause. And it seems telling that he no longer quotes Shakespeare as he does in the novel, reciting Miranda’s lines in “The Tempest” from which Huxley took his ironic title: “How beauteous mankind is! O brave new world, that has such people in’t!”

Perhaps because test-tube babies, drug use and “free love” are widely considered mundane today, the series relies on familiar (and distracting) subplots to pad out its epic running length, including murder, a revolt by workers and wicked corporate powers-that-be. Blink and this could be HBO’s “Westworld,” with a cliffhanger ending crying out for a sequel.