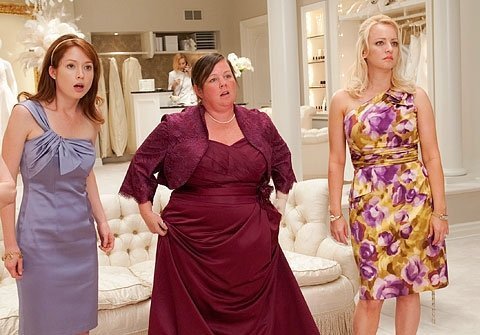 NEW YORK (CNS) — Those who watched the seemingly flawless nuptials uniting Britain’s newly minted Duke and Duchess of Cambridge will find a very different wedding experience awaiting them with the arrival on the big screen of the ill-tempered comedy "Bridesmaids" (Universal).

As written by Annie Mumolo and Kristen Wiig, director Paul Feig’s stumble toward the altar starts with a graphic, commitment-free bedroom scene and proceeds to lift the veil — to supposedly humorous effect — on other uninviting matters such as the symptoms of food poisoning.

Wiig stars as Annie, a failed bakery owner who finds the downward spiral of her fortunes accelerating after her lifelong best friend Lillian (Maya Rudolph) becomes engaged and asks her to serve as maid of honor.

What follows is a frantic rivalry pitting Annie against Helen (Rose Byrne) — another of the attendants and a newfound pal of Lillian’s who, Annie fears, may displace her in the bride-to-be’s affections — as well a series of disastrous misadventures for the titular ensemble as a whole (which also includes Melissa McCarthy, Ellie Kemper and Wendi McLendon-Covey).

Since most of these calamities are directly attributable to Annie’s misguided efforts to best rich, glamorous and fanatically organized Helen, Lillian — not surprisingly — begins to lose patience with her old buddy. So, too, will many viewers.

One glimmer of hope in Annie’s life is her budding romance with Irish-born local policeman Rhodes (Chris O’Dowd). But their potentially winning relationship — Rhodes, for instance, thoughtfully encourages Annie to start baking again — turns prematurely physical after only a few social encounters.

This is in keeping with the long-standing, utterly loveless affair linking Annie with wealthy, frivolous Ted (Jon Hamm). As revealed in that opening scene, which also features some obscene dialogue, their bond is strictly zoological.

Although Annie’s willingness to play along with this base arrangement is presented as a symptom of her lack of self-respect, that doesn’t prevent the screenwriters from trying to make comic hay out of it.

On the whole, then, this is one wedding that deserves a bad reception.

The film contains explicit nonmarital sexual activity, much sexual and scatological humor, a same-gender kiss, at least a half-dozen uses of profanity and pervasive rough and crude language. The Catholic News Service classification is O — morally offensive. The Motion Picture Association of America is R — restricted. Under 17 requires accompanying parent or adult guardian.