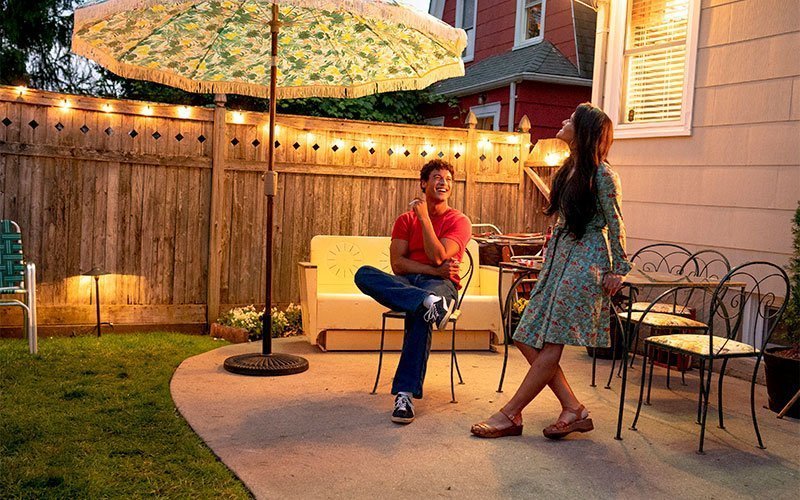 It promised a bright future for the 27-year-old filmmaker who drew successfully, if with mixed emotions, on his predominantly Irish Catholic heritage.

In the intervening quarter-century, Burns has repeatedly plowed the same suburban New York terrain with uneven results. “Bridge and Tunnel,” set in 1980 and directed, written by and featuring Burns — who also executive-produced the project — doesn’t, unfortunately, represent a return to form for the auteur.

Tedious and morally questionable, the six-episode limited series dramedy premieres on Epix on Sunday, Jan. 24, 9-9:30 p.m. EST. It continues in that timeslot through Feb. 28.

The story revolves around a sextet of longtime friends and recent college graduates from a working-class community. The crass tone that mars the show is established from the start as viewers are introduced to its leading duo, Jimmy (Sam Vartholomeos) and Jill (Caitlin Stasey), while they’re engaged in a sexual encounter in the restroom of a bar.

This get-together, we learn from the conversation of their pals, represents a reunion for the pair, who had split up six months earlier. The group debates the advisability of reviving the relationship, a topic about which Jimmy and Jill are themselves ambivalent. Their wavering attitude toward their future together is the core of the plot.

Jimmy’s father, Artie (Burns), a self-employed painting contractor, tries forcefully to dissuade him from recommitting to Jill. Anxious to nurture his son’s gift as a photographer, Artie fears Jimmy may squander a great career opportunity: a job working in Alaska as apprentice to a top nature lensman on the staff of the National Geographic.

An aspiring fashion designer, Jill encounters condescension from her superiors at her entry-level job in Manhattan. The program’s title derives from the contemptuous nickname she’s given at her workplace, based on her rough accent and status as a commuter — and, therefore, it’s assumed, a provincial outsider.

Realistic about what’s going to happen if Jimmy goes away, Jill doesn’t want to hamper his prospects. She also yearns to follow her own path.

He has an on-again, off-again — but always noncommittal — bond with his former girlfriend, Stacey (Isabella Farrell). For her part, Stacey is simultaneously mixed up with an unseen older man in Manhattan. Tammy (Gigi Zumbado), a Latina waitress at a diner Mikey frequents, also takes an interest in him.

A divorcee, she’s about to go on her first date in a good while with Stacey’s dad, Louie (Wass Stevens). But she worries her children may come home and catch them having sex. Gina’s wayward attitude is further revealed by her hope that Pags’ sister, Liz (Barrett Wilbert Weed), will get “lucky” during her tryst that same night.

“Bridge and Tunnel” isn’t devoid of all merit. Its most edifying moments are those devoted to Artie’s efforts to encourage Jimmy to pursue his art. Given that the latter serves as Burns’ alter ego, these scenes can be understood to depict the filmmaker in dialogue with his younger self.

Burns’ equivocal treatment of faith — warmhearted in a certain sense yet flippant and obviously undemanding in terms of sexual ethics — also is problematic.

Jimmy wears a cross and gets down on his knees each night to talk to “the big guy.” But, in thanking God for his reunion with Jill, he treats the deity like his wingman. He also observes that his gratitude on this score is so great that he might even go to Mass.

All this muddle requires mature discernment on the part of grown viewers. They’re unlikely, however, to find the rewards on offer worth the effort.