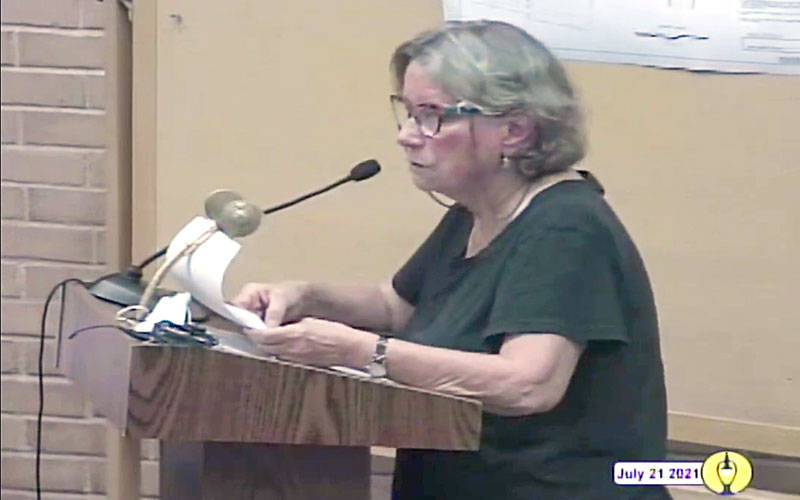 Carol Crossed speaks at a July 21 hearing in Brighton regarding construction of a Planned Parenthood facility. (Screenshot courtesy of the Town of Brighton)

Nearly 40 people spoke up about the proposal at a public hearing conducted prior to the board’s vote.

One longtime Brighton resident, Catholic pro-life activist Carol Crossed, spoke against the plan then read excerpts from a letter written by Brighton attorney William McGinn, who has been working with the local group Brighton Residents Against Violence in opposition to the project.

He also raised concerns about plans for the disposal of the remains of aborted fetuses as medical waste and brought up questions of traffic safety for pro-life protesters and motorists.

Crossed also shared a concern she said McGinn’s letter did not address: the likely need for excessive policing at the facility and what it would cost Brighton taxpayers.

She displayed papers she said were police records she had obtained for the four months in 1999 during which Dr. Morris Wortman’s abortion facility at 220 S. Clinton Ave. in Brighton was constructed. During that period, she said police received 55 police calls to the facility that were not in regard to crime but were “basically to harass people expressing their right to free speech.”

“And is this the way that the Town of Brighton and this planning board believes that the good citizens of Brighton should spend their tax money?” Crossed asked.

Other pro-life advocates as well as supporters of the project also submitted letters to the planning board, while officials from the Diocese of Rochester issued a July 21 memorandum directly to Brighton parishioners, urging them to “charitably and peacefully make their opposition known to the Town of Brighton, and to continue to work tirelessly on behalf of those who need our protection.”

The memorandum — issued by Bishop Salvatore R. Matano; Shannon Kilbridge, diocesan life-issues coordinator; Marlene Bessette, president and CEO of Rochester’s Catholic Family Center; Jack Balinsky, diocesan director of Catholic Charities; and Father Gary Tyman, pastor of Our Lady of Lourdes/St. Anne parishes in Brighton and Rochester — noted that Brighton parishes work with local Catholic and community organizations to help those in need and that other ways should be found to “walk with women in crisis pregnancies by offering life giving assistance.”

Addressing the planning board near the end of the July 21 public hearing, Michelle Casey, CEO of Planned Parenthood of Central and Western New York, noted that the siting and construction of the Planned Parenthood facility is governed by the New York State Department of Health, which she said had already approved a “certificate of need” for the project.