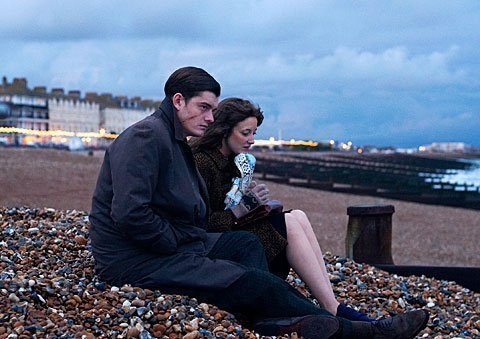 Based on Graham Greene’s 1939 novel, also adapted for the screen in 1947, the story revolves around depraved 17-year-old hoodlum Pinkie Brown (Sam Riley), who manipulates a naive waitress to avoid being arrested for two murders he commits in the coastal resort of Brighton.

Before launching his directorial career, Richard Attenborough delivered a chilling performance as Pinkie in the postwar noir version, which Greene co-wrote with Terrence Rattigan. In this iteration, writer-director Rowan Joffe — son of Roland ("The Mission") — sets the action in 1964, juxtaposing Brighton’s seedy underside with social unrest arising from the decade’s intergenerational tensions.

Because Pinkie and young Rose (Andrea Riseborough) are both devout Catholics (about his faith, Pinkie avers, "It’s the only thing that makes any sense"), the decision to alter the time period also invites reflection on how attitudes toward the church started to change following the Second Vatican Council. Introducing this implicit motif does not obscure Greene’s primary aim — namely, weaving tough and timeless questions about religious belief into a harsh but entertaining yarn.

A minor gangster who brutally comes of age during a turf war, Pinkie alternately woos and intimidates the nervous Rose after she unwittingly gains information that could doom him and his associates.

Ida, who manages the tearoom where Rose works, is determined not to let Pinkie escape justice or ruin Rose. Riley and Riseborough acquit themselves well, but Helen Mirren’s portrayal of the steely Ida offers needed ballast, as do turns by John Hurt and Andy Serkis in smaller roles.

The suspense is palpable, yet first-time director Joffe frequently opts for histrionic touches that threaten to tip the proceedings into melodrama, albeit of a hardboiled variety. Riots between rival youths –so-called Mods and Rockers — while fact-based and topical, thanks to recent lawlessness on the streets of Britain, are not staged convincingly.

Still, the movie’s artier pretensions and lack of subtlety are in keeping with both the novel and the earlier film. Its depiction of Catholicism is slightly overwrought, though never sacrilegious or heretical.

The same cannot be said of Pinkie’s malevolent behavior, and his imminent demise is never in doubt. The wicked must suffer in Greene’s universe, but so too must the innocent.

One can argue "Brighton Rock" goes further by suggesting that less separates good and evil, salvation and damnation than we’d like to believe. Its conclusion, which mimics the softer ending Greene devised for the 1947 film, is notably ambiguous. Whether the message Rose receives in the final scene constitutes a merciful miracle or a cruel sham is open to interpretation.

Since they’re integral to the plot, the objectionable elements listed below can be judged acceptable for adults willing to grapple with Greene’s richly complex view of Catholicism and of faith in general.