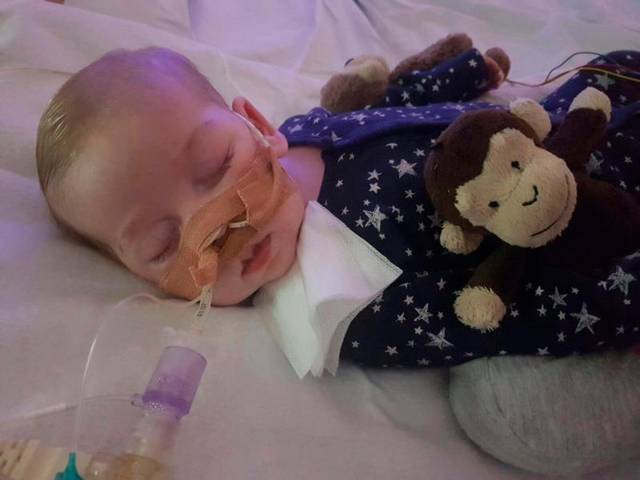 Charlie Gard, who was born in England with mitochondrial DNA depletion syndrome, is pictured in this undated family photo. The baby, who was at the center of a legal battle that captured the world’s attention, died July 28, just over a week before his first birthday.

MANCHESTER, England (CNS) — Charlie Gard, the British baby whose legal battle caught the attention of the world, died July 28, just over a week before his first birthday, his family announced.

Connie Yates, the baby’s mother, issued a brief statement saying: “Our beautiful little boy has gone, we are so proud of you Charlie.”

Charlie, who would have turned 1 year old Aug. 4, had been transferred to a hospice for palliative care after Yates and his father, Chris Gard, said July 24 they had decided to drop their legal battle to pursue treatment overseas.

The couple wanted to take Charlie home to die, but a High Court judge decided it was in the child’s best interest to spend his final hours in the care of a hospice. He suffered from encephalomyopathic mitochondrial DNA depletion syndrome.

The situation had caught the world’s attention, including the attention of Pope Francis. The day the parents dropped their legal battle, Greg Burke, director of the Vatican press office, said the pope was “praying for Charlie and his parents and feels especially close to them at this time of immense suffering.”

After news of Charlie’s death, Pope Francis tweeted: “I entrust little Charlie to the Father and pray for his parents and all those who loved him.”

Charlie’s parents, who live in London, had fought for eight months for medical help that might have saved the life of their son.

They raised 1.3 million pounds (US$1.7 million) to take him abroad for treatment, but the Great Ormond Street Hospital in London had argued that Charlie was beyond help and that it was not in his best interests to be kept alive, triggering a protracted legal battle with the parents that led to interventions from U.S. President Donald Trump and from the pope.

At a news conference July 25 in Rome, Mariella Enoc, president of the Vatican children’s hospital, Bambino Gesu, said the hospital had partnered U.S. neurologist, Dr. Michio Hirano, to study Charlie’s case. In July, the hospital agreed with Hirano that the child’s illness had proceeded too far for treatment, which might or might not have worked six months earlier.

But “the plug was not pulled without having tried to respond to a legitimate request by the parents and without having examined fully the condition of the child and the opportunities offered by researchers on an international level,” the hospital said in a statement.