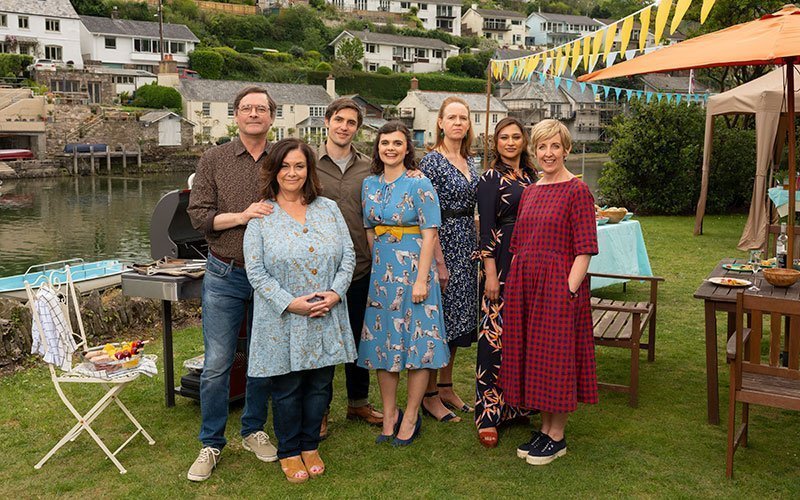 This is a photo for the TV show "The Trouble With Maggie Cole," premiering on PBS Sunday, Oct. 18. (CNS photo courtesy PBS)
NEW YORK (CNS) — Though somewhat far-fetched, “The Trouble With Maggie Cole” is a timely fable about the real harm rumors and misinformation can do to a community and to society.
Having premiered on the U.K.’s ITV in March, the limited series debuts on PBS Sunday, Oct. 18, 8-9 p.m. EDT. Times may vary, however, so viewers should consult their local listings.
The six-episode series will run in the same time slot through Sunday, Nov. 22.
Mark Brotherhood created and wrote the dramedy, and Ben Gregor directs. Through the two episodes available to preview, the series includes a plotline involving bigamy, references to a gay romance and some off-color and vulgar dialogue. It’s acceptable fare for grown-ups.
With reference to the heritage site that distinguishes her fictitious hometown, the seaside village of Thurlbury, the titular character (Dawn French, “The Vicar of Dibley”), a woman of a certain age, refers to herself as “the keeper of the keep.” A fourth-generation resident of Thurlbury, which was founded in the Middle Ages, Maggie also fancies herself the town’s unofficial historian.
When viewers first meet her, Maggie is enthusiastically sharing what she considers thrilling news with her husband of 31 years, Peter (Mark Heap). She’s going to be interviewed on the radio about life in Thurlbury, as well as its history and lore. Beyond the personal gratification, Maggie regards this as an opportunity to promote a local festival she’s been organizing.
A barbecue the couple throws to celebrate the broadcast, however, swiftly degenerates amid recriminations as their neighbors and friends hear Maggie publicly revealing some of Thurlbury’s most closely held secrets.
Her plea that Jez (John Macmillan), the interviewer, plied the information out of her with gin and tonics fails, understandably, to assuage the partygoers’ resentment. The ensuing scandal becomes known as RadioGate, and Maggie becomes a popular meme.
In response, Maggie refuses “to feel like a pariah in my own village.” But she also works to make amends. In the process, she discovers that some of the tales she shared on the air weren’t true after all. Viewers, meanwhile, see that her spilling of the beans may, in the end, benefit people Maggie thought she had harmed.
The show suffers from a premise that’s difficult to accept. While it makes sense that Maggie might know more than anyone else about life behind the scenes in Thurlbury, gossips tend to be serial offenders. They don’t typically slip up in one drunken incident.
It’s equally implausible that a radio personality doing a fluff piece about small town life would conspire to get his subject “sloshed” in order to “break the internet.” What’s more convincing, though — thanks to French’s skillful portrayal of her — is the personal growth Maggie experiences as a result of her massive indiscretion.
Maggie initially comes across as overly eager, needy and annoying. Yet her remorse is genuine and deeply felt while her desperate need to atone is both admirable and relatable. Heap’s thoughtful, sensitive depiction of Peter, moreover, makes him equally engaging.
It’s hard to say what twists and turns may lie ahead. But Brotherhood’s scripts suggest the audience can anticipate the unexpected. The opening credits also portend some forbidding events that may prove intriguing. Accordingly, adult viewers willing to suspend a hefty amount of disbelief may find their investment in “The Trouble With Maggie Cole” a profitable one.
– – –
Byrd is a guest reviewer for Catholic News Service.
Copyright © 2023 Catholic News Service, Inc. All rights reserved. Linking is encouraged, but republishing or redistributing, including by framing or similar means, without the publisher's prior written permission is prohibited.