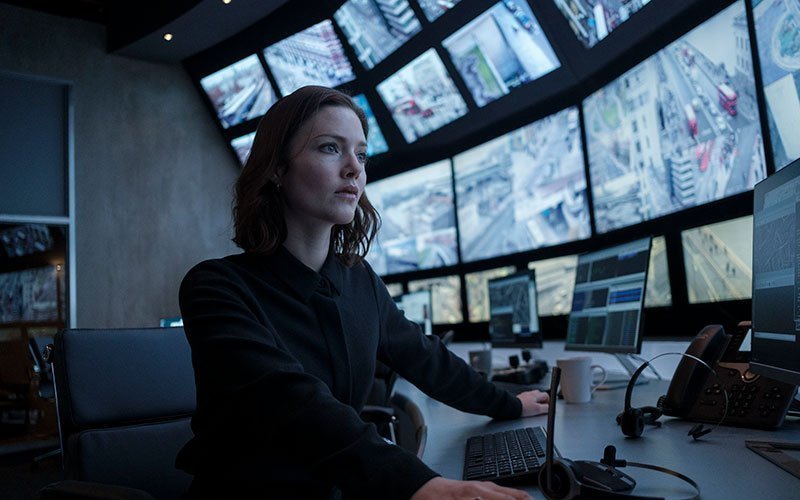 Holliday Grainger stars in a scene from the TV show "The Capture" streaming on Peacock. (CNS photo by Heyday Films via NBCUniversal)

NEW YORK (CNS) — Clever and engrossing, “The Capture” asks important, difficult questions about morality in the age of terrorism. The crime suspense drama, which first aired on BBC One last September, is available on Peacock Premium in six one-hour episodes.   Set in contemporary London, the limited series was written and directed by BAFTA Award-winning director Ben Chanan (“The Plot to Bring Down Britain’s Planes”).

Accused of a war crime for killing an unarmed Afghani at close range, British soldier Shaun Emery (Callum Turner) is understandably overjoyed when, after detecting a flaw in a video implicating him, his attorneys, Charlie Hall (Barry Ward) and Hannah Roberts (Laura Haddock), win his acquittal.

On his first night of freedom, however, CCTV cameras appear to record Shaun assaulting and kidnapping Hannah. When she subsequently turns up dead, Shaun becomes the chief suspect.

With its challenging subject matter and depictions of violent actions of various kinds, including torture, as well as images of partial nudity and an adultery theme, “The Capture” is best for grown viewers. While the show also contains a fair amount of vulgar language, relative to other series this element doesn’t seem excessive.   The prevalence of CCTV surveillance in London and the use of fake videos are central to the plot. Thus Alma (Adelayo Adedayo), whose brother Faisal (Tomiwa Edun) has been accused of terrorism and who, like Hannah and Charlie, believes the government is trampling civil liberties, estimates there are 6 million closed-circuit cameras in the U.K.

Seasoned and ruthless CIA operative Frank Napier (Ron Perlman), who’s in charge of the shadowy network supporting the London police force’s covert counterterrorism efforts, may be Alma’s foil. Yet he shares her assessment of the British capital’s security arrangements.

“It is,” he says, “the most heavily surveiled city in the Western world.”

The sheer volume of video footage presents opportunities, both for the government and for those working to undermine it, to create false narratives. This becomes a point of contention between Rachel, who’s convinced of Shaun’s innocence, and Detective Superintendent Gemma Garland (Lia Williams), who is working to block Rachel’s pursuit of the truth.

“Accepting you can rarely see the whole picture is part of the job,” Gemma admonishes Rachel. The latter, however, knows better: “When they say, ‘Move along, nothing to see here,'” she says to her boss, “they’re lying.”

Ethical complexity helps to make “The Capture” compelling. Rachel, for instance, wrestles with whether their potential to wreak havoc justifies using questionable methods against terrorists. After all, as Frank says to Hannah: “Your beautiful system is anathema to the people you are trying to defend. They want our way of life to end.”

Shaun, for his part, accepts being pursued for a crime he didn’t commit as just punishment for a transgression of which he was guilty.

To its credit, the show lets neither its characters nor the audience off the hook. Instead it forces them, in the words of the Austrian poet Rainer Maria Rilke, to “live the questions.” Its suitably ambiguous ending, moreover, will sharpen viewers’ appetite for a second season of “The Capture.”