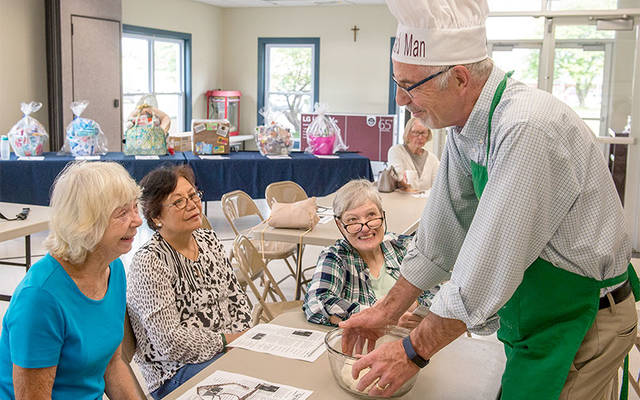 Chet Fery explains his hobby of sharing kindness through bread making during an Aug. 22 presentation at St. Mary Church in Honeoye. (Courier photo by John Haeger) 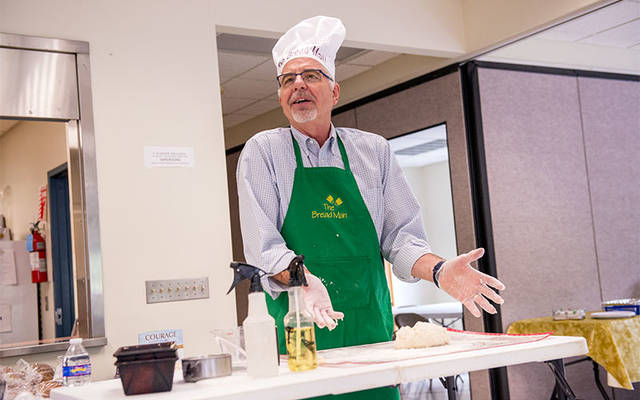 HONEOYE — “If you listen and don’t fall asleep, you get a free loaf of bread,” announced the man in a green apron and baker’s hat.

That introductory quip by Chet Fery set the tone for a frequently humorous presentation Aug. 22, based on two interrelated themes: bread and kindness.

Appearing before more than 50 people in the parish center of St. Mary Church, Fery — also known as “The Bread Man” — demonstrated the art of baking bread while sharing bread-related memories from his life. For instance, Fery, who grew up in Buffalo, recalled being sent to the bakery to buy his mother some rye bread. But after sneaking a bite or two on the way home, he was ordered to turn back around and get another loaf.

Fery, 68, noted that his own odyssey into baking began in the late 1990s, when he sought to duplicate his favorite pizza from Buffalo. He gave up that pursuit, he said, after his family complained about having to eat pizza every night for three weeks. Eventually he began to specialize in baking bread, and on Monday mornings would bring loaves to work in the Gates-Chili School District where he served as an administrator, leaving the bread on a table for people to take home at no cost.

His bread turned out to be a hit, and Fery kept the practice up at Gates-Chili for years — especially after it dawned on him that “they weren’t looking for the bread, but they were looking for this,” he told his audience, holding up a sign displaying the word “kindness.”

Since his 2006 retirement, Fery has continued expanding his custom of baking bread to give away; he now has two ovens in his Brockport home and estimates that he’s baked 85,000 loaves over a nearly 20-year period. Along the way, he has incorporated speaking engagements into his hobby. He drives thousands of miles per year, averaging four appearances per week at such venues as churches, schools, senior-citizen facilities, businesses and college campuses.

“I make bread with children, and I make bread with people who are 100 years old,” said Fery, who belongs to the SUNY Brockport Newman Community along with his wife, Marina. He is a member of Knights of Columbus Council 7707.

Fery also has created a website, http://breadtimestorie sandmore.com. In addition, he regularly goes out into the community to give away his bread, often doing so with strangers with whom he enjoys striking up conversations. He likewise spent several minutes before and after his Aug. 22 presentation at St. Mary chatting with audience members. Also that morning, Fery set out dozens of his loaves of bread for those in attendance to take home, as well as flyers containing his recipes for different types of bread, including Toasted Oatmeal Wheat and Tonawanda Rye.

Prior to Fery’s talk, Father Hoan Dinh — pastor of St. Mary as well as St. Matthew Parish in Livonia — gave a blessing in which he implored all who were gathered to pray for folks who experience hunger “spiritually, materially and physically.” Meanwhile, Fery emphasized that his bread ministry is, at its core, a vehicle for extending care and compassion to others.

“A loaf of bread and an act of kindness can ripple through a community,” he said.

Fery went on to stress that all of us are capable of such kindness.

“Don’t put it in somebody else’s hands. If you want the world to change, do it through acts of kindness,” he told the group at St. Mary. “Kindness should be part of everything we do. It should be putting our prayers into action.”

He added that such actions would be highly welcomed in this day and age, saying the world around us is losing its sense of personal connectedness.

“We’re all good alone, but we’re better together. We need more community, we need more that feeling of kindness,” he remarked. “People are desperate for kindness.”