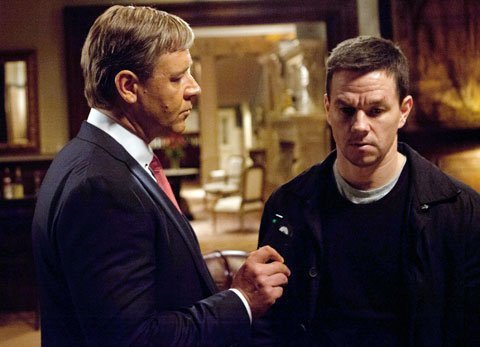 NEW YORK (CNS) — Scandal, intrigue and a surfeit of bad language combine to form "Broken City" (Fox). This thriller with political overtones is strictly for those who can withstand actors growling their lines, downing two shots of whiskey in one go and dropping a payload worth of F-bombs.

Seven years after being acquitted in the suspicious shooting of a rapist and murderer, ex-cop Billy Taggart (Mark Wahlberg) is approached by the mayor of New York, Nicolas Hostetler (a sensational Russell Crowe), who wants to make a deal: Hizzoner withheld evidence of Taggart’s wrongdoing; now, he wants Taggart to return the favor with some private-eye work.

With the mayoral election looming and feisty new rival Jack Valliant (Barry Pepper) posing a threat to his reign, Hostetler is determined to retain his office by any means necessary. But he fears that his wife, Cathleen (Catherine Zeta-Jones), is two-timing him. So, for $50,000, the former officer is dispatched to follow, find, and film the illicit couple.

Predictably, things are not what they seem in director Allen Hughes’ picture, and the grizzled Taggart quickly finds himself caught in a web of intrigue and blackmail. He has other troubles as well, namely, his struggle with alcoholism and his complicated, frequently strained relationship with girlfriend — and wannabe actress — Natalie (Natalie Martinez).

Moviegoers of faith will be pleased by Taggart’s commitment to justice, despite the sometimes murky means by which he seeks to achieve it. Laudably, Brian Tucker’s screenplay shows the true costs and consequences of corruption. And, while it encourages viewers to understand Taggart’s morally dubious choices, his script doesn’t prompt them to approve.

Yet the evident desire to turn out a gritty movie sends things off track, with scenes of heavy drinking interspersed with locker-room vulgarities.

Although at least one scene implies that Taggart and Natalie are living together, he is at least shown to be a believer in marital fidelity. In fact, when he reproaches the mayor’s wife with her breach of trust, she tauntingly responds, "Are you stupid or Catholic?"