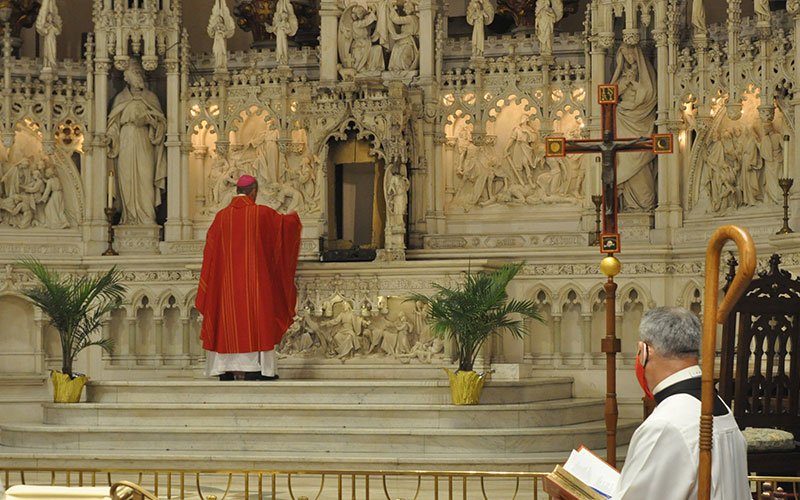 Bishop Robert J. Brennan of Brooklyn, N.Y., blesses and purifies the metal casing that held St. Augustine Church's historic tabernacle June 4, 2022. A week earlier a burglar cut through the protective casing to steal the tabernacle. Angel statues flanking it were decapitated and consecrated hosts from inside it were thrown all over the altar. (CNS photo by Ed Wilkinson/The Tablet)

BROOKLYN, N.Y. (CNS) — The loss of St. Augustine Church’s tabernacle in a burglary is a “saddening” material loss, but what brings Catholics together “is our faith in the presence of Jesus Christ among us in the Blessed Sacrament,” Brooklyn Bishop Robert J. Brennan said June 4.

The bishop made the comments in his homily during an evening Mass that included the blessing and purification of the altar and the church following the burglary a week earlier.

The brazen theft was discovered in the afternoon of May 28. The burglar cut through a metal protective casing and made off with the tabernacle, which dates back to when the church was built in the late 1800s. This holy sacramental receptacle is irreplaceable due to its historical and artistic value, according to the diocese.

“The material lost is saddening (and) the historical loss, when you realize that tabernacle represented generations of people who have come before us,” Bishop Brennan said in his homily. “A bit of our history was taken from us.”

“But above all, what brings us together every week, is our faith in the presence of Jesus Christ among us in the Blessed Sacrament. It was desecrated in a terrible way and indeed we are broken,” he said.

The blessing and purification was part of a “penitential rite of reparation.”

At the start of the rite, the church altar was bare. After entering the sanctuary, Bishop Brennan blessed the water and sprinkled the altar, the congregants and the walls of the desecrated church as a sign of purification. The altar was then dressed as the offertory of the Mass began.

Parishioners vested the altar and Father Frank Tumino, pastor of St. Augustine, lit the candles in preparation for the liturgy of the Eucharist.

The Mass was then celebrated, and the desecrated church building was restored “to its sacred dignity renews,” Bishop Brennan said.

The restoration “renews the resolve of the local church in Brooklyn and Queens to grow in holiness and in witness to the presence of our risen Lord in the world today,” he said.

The New York Police Department announced a reward of up to $3,500 for information leading to an arrest in the case. The solid gold and jeweled tabernacle is valued at $2 million.