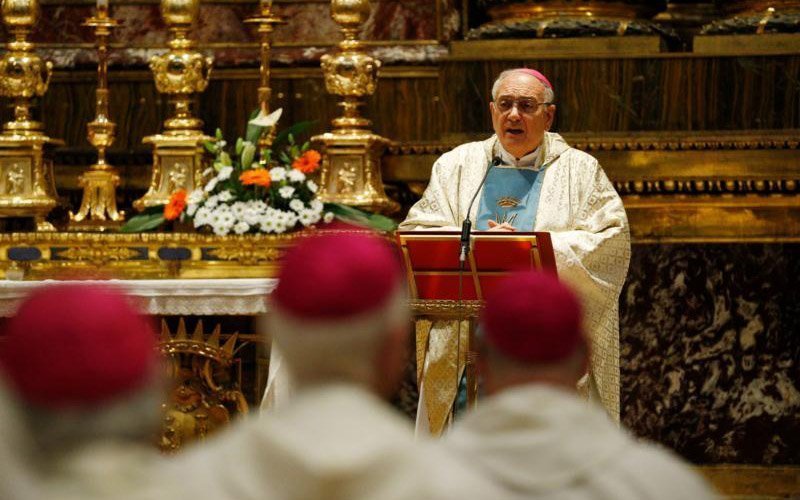 Bishop Nicholas A. DiMarzio of Brooklyn gives the homily as U.S. bishops from the state of New York concelebrate Mass at the Basilica of St. Mary Major in Rome Nov. 11, 2019. (CNS photo by Paul Haring)

BALTIMORE (CNS) — After an attorney threatened to file a lawsuit alleging he abused a child decades ago when he was a priest in New Jersey, Bishop Nicholas DiMarzio of Brooklyn, New York, issued a statement Nov. 13 denying the accusation and said he “will vigorously defend” himself against the claim.

“I am just learning about this allegation. In my nearly 50-year ministry as a priest, I have never engaged in unlawful or inappropriate behavior and I categorically deny this allegation. I am confident I will be fully vindicated,” Bishop DiMarzio said in a statement to Catholics of the diocese.

The allegation came to light as the U.S. Conference of Catholic Bishops wrapped up the public portion of its fall meeting in Baltimore. Bishop DiMarzio is currently in Rome with the other bishops of New York for their “ad limina” visits. The bishops were due to meet the pope Nov. 14 or 15 and were scheduled to be in Rome until Nov. 16.

The Associated Press published a story Nov. 13 relating an accusation dating to the time the bishop was a priest at St. Nicholas Parish in Jersey City, New Jersey, in the 1970s. A native of Newark, he was ordained a priest for the Newark Archdiocese in 1970.

“There will be a legal process now and I will vigorously defend myself against this false allegation,” Bishop DiMarzio said in the statement. “I am confident I will be fully exonerated.”

In his statement, he said sexual abuse is “a despicable crime and since arriving at the diocese in 2003, I have worked and will continue to work tirelessly to purge sexual abuse from our diocese in Brooklyn and Queens.”

“The coming days may become challenging for us as a diocese as I work to defend myself from this false allegation. During this difficult time, I will pray for our diocese and ask for you to remember me in your prayers,” he wrote in the statement addressed to the faithful of Brooklyn and Queens.

In December, the state of New Jersey is scheduled to lift the statute of limitations for a two-year “look back” period that will allow alleged victims of sex abuse to file lawsuits no matter when the alleged abuse occurred.

A spokeswoman for the Newark Archdiocese told The Associated Press the archdiocese has received a letter from the attorney representing the alleged victim and the allegation has been reported to law enforcement as per church protocols.