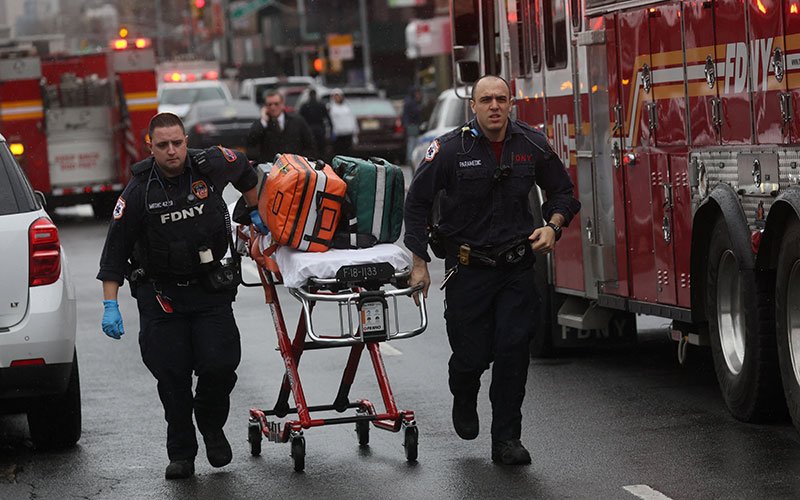 Emergency personnel work near the scene of a shooting at a subway station in the Brooklyn borough of New York City April 12, 2022. (CNS phot by Brendan McDermid/Reuters)

In his homily at the evening chrism Mass April 12, Bishop Robert J. Brennan spoke of the subway shooting that occurred early in the day, saying: “We were shaken to our core this morning, right here in the borough of Brooklyn, when violence hit us at home.”

“Tonight, we pray very earnestly for those who were injured, passengers on the train, and the police who went in. We pray for their healing and restoration of their health. We pray for all of those out there every day watching over, protecting us, in so many ways,” he said.

Bishop Brennan’s remarks echoed a statement he issued shortly after reports that a shooting spree took place at the Sunset Park subway station.

Reuters, CNN and other news outlets reported that during the morning rush hour, a man wearing a gas mask released a canister of smoke and opened fire into the crowd on a train and on the station platform at a subway stop in the Brooklyn borough of New York.

A massive manhunt began immediately for the suspected shooter, later identified as Frank R. James, 62, and initially described as a person of interest. By the next morning, police said he was the only suspect.

New York police were joined by other state and federal officers in the manhunt.

More details about his arrest were to be announced at a news conference later in the afternoon.

At least 23 people were injured in the shooting spree. Ten of them were hit by gunfire; most were treated and released from the hospital. Others were treated for smoke inhalation or injuries they suffered from bullet shrapnel or in the crush of people in a panic to flee the car as it filled up with smoke.

News reports said the alleged shooter dropped a set of keys at the scene of the shooting that led them to a U-Haul van parked a few miles from the subway station. James had rented the van in Philadelphia.

He also left behind a bag with a hatchet, two gas canisters and a single automatic handgun that apparently jammed — perhaps saving lives.

James, who police said has addresses in Philadelphia and Wisconsin, has been linked to rambling videos posted on a YouTube channel.

“Many of the videos that James uploaded included references to violence, including at a set group of people he believed had maligned him, in addition to broad societal and racial groups that he appeared to hate,” CNN reported.

James, who is Black, “rants about abuse in churches and racism in the workplace, using misogynistic and racist language,” CNN added.

Reuters described the subway station where the shooting occurred as being in an area “known for its thriving Chinatown and views of the Statue of Liberty.”

Authorities have not speculated on James’ motive for the shooting.

“We see that sometimes evil prevails, but we know it is not the final answer,” Bishop Brennan said in his chrism Mass homily. “And always, this morning, no exception, do we see that when evil prevails the goodness of people becomes even stronger.

“The power of Jesus risen from the dead is always, always at work, reminding (us) it (evil) is not the final answer.”

During the Mass at the Co-Cathedral of St. Joseph in the Prospect Heights section of Brooklyn, the bishop consecrated the oils to be used in the coming year to anoint the sick, baptize catechumens and infants, ordain priests and anoint altars.

Bishop Brennan also led hundreds of priests and deacons in renewing their promises of service to the church.