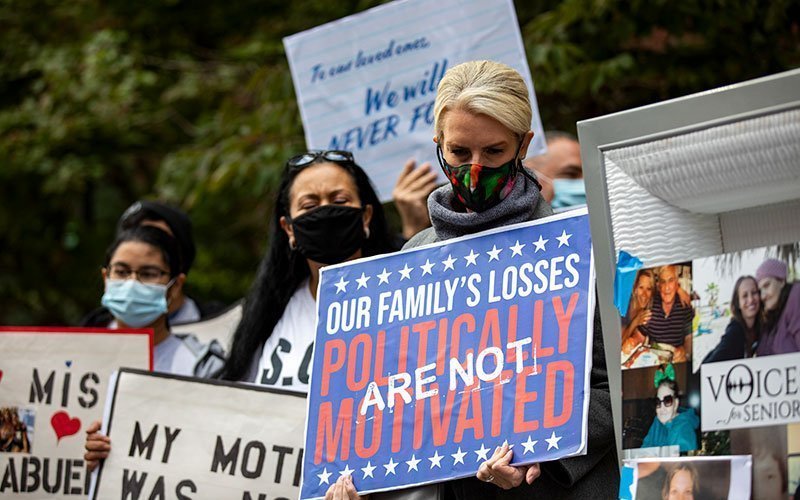 Grieving family members hold a mock funeral in the Brooklyn borough of New York City Oct. 18, 2020, to protest Gov. Andrew Cuomo's coronavirus restrictions that they say led to the deaths of their loved ones in nursing homes. (CNS photo by Jeenah Moon, Reuters)

BROOKLYN, N.Y. (CNS) — After a federal judge sided with New York Gov. Andrew Cuomo in its court fight against the state’s latest restrictions on houses of worship, the Brooklyn Diocese “is extremely disappointed” but is considering its “appellate options,” Bishop Nicholas DiMarzio said in a statement.

“We believe we presented a strong case in support of our right to worship,” he said in an Oct. 16 statement. “It is a shame our parishioners in the red zones cannot return to Mass when the judge acknowledged we have done everything right.”

“There is nothing more important than the safety of our parishioners. That is why we have worked diligently to implement strict COVID-19 safety rules that go above and beyond state requirements,” Bishop DiMarzio said.

The diocese will continue to require masks to be worn “in order to participate in all our services,” he said. “We will continue to voluntarily limit capacity in all buildings to 25% occupancy, and we will abide by social distancing guidelines as required.”

He added: “The proof of our compliance is the fact that we have not had any COVID outbreaks or significant cases in either our churches or schools. We continue to evaluate our procedures to build upon the safety we have so far achieved.”

On Oct. 6, Cuomo announced new restrictions on houses of worship in response to a spike in COVID-19 cases in densely populated ZIP codes he identified as “hot zones.” He said the state has created three zones — red, orange and yellow — each with different restrictions, including on the size of congregations.

Some Catholic parishes in the Brooklyn Diocese are in the “red zone,” meaning their churches are being forced to reduce capacity to a maximum of 10 people inside at one time, and some are in the “orange zone,” where only 25 people at one time can attend Mass. A “yellow zone” designation means a 50% capacity.

Also, four Catholic schools in the diocese have been ordered closed. They are among the public and nonpublic schools in hot zones closed by Cuomo.

On Oct. 8, the Diocese of Brooklyn filed a lawsuit in the U.S. District Court for the Eastern District of New York against the state of New York, charging that Cuomo’s new executive order reducing church capacity violates the First Amendment’s guarantee of the free exercise of religion. It sought a temporary stop on Cuomo’s new orders while the suit proceeded.

On Oct. 10, Judge Eric Komitee denied the motion for a temporary stop on Cuomo’s restrictions, saying the government “is afforded wide latitude in managing the spread of deadly diseases under the Supreme Court’s precedent.”

“This is a difficult decision,” Komitee said, but citing rulings by other courts on similar cases, he said he did not think Cuomo’s restrictions “would be found unconstitutional.”

“And given the severity and complexity of the pandemic,” he added, “it cannot be said … the balance of equities favors the plaintiff.”

However, he said the Brooklyn Diocese could apply to Senior Judge Nicholas Garaufis on the court “for a preliminary injunction, as the record may be developed more fully.”

In his order Oct. 16, Garaufis ruled against the diocese, saying that if the court issued an injunction “and the state is correct about the acuteness of the threat currently posed by hot spot neighborhoods, the result could be avoidable death on a massive scale like New Yorkers experienced in the spring.”

AP reported the judge said he was not downplaying the “the seriousness of that constitutional harm” at the heart of the diocese’s argument the new pandemic restrictions infringed on worshippers religious freedom, and said it was conceivable the diocese could end up ultimately winning the case.