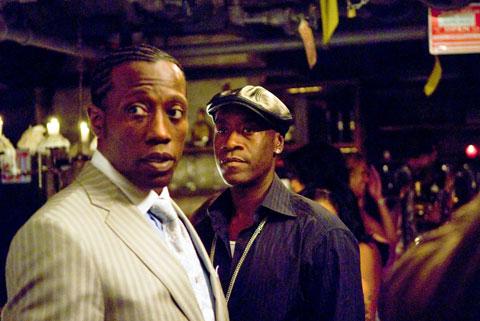 Wesley Snipes and Don Cheadle star in a scene from the movie "Brooklyn's Finest." (CNS photo by Overture Films)

But faith provides no meaningful guidance to the conflicted cops who populate this grim journey through Gotham’s criminal underworld. Instead, characters cross all manner of legal and moral boundaries as the obscenity laden-script lurches from bloodshed to explicit scenes of sexuality.

The ultimately impotent role of religion in at least two of these three chaotic lives is typified by a pair of unsettling early scenes.

In one, Eddie wakes up from a nightmare in a bedroom where practically the only form of decoration is a rosary hanging over the bed, downs a shot of whiskey and plays a round of Russian roulette with his service pistol jammed in his mouth. The other shows Sal going to confession, but ultimately declaring — with language typical for the dialogue but wildly inappropriate for the sacred setting — that he doesn’t want God’s forgiveness, just his help.

Sal’s goal is to raise the money — by fair means or foul — for a new house, not only to get away from the mold that aggravates wife Angela’s (Lili Taylor) asthma, but to accommodate the five children he already has and the twins who are on the way. The clear implication is that Sal’s Catholic beliefs prevent him from exercising responsible family planning, as though artificial contraception were the only viable means of doing so.

Sal’s back is adorned with a large tattoo of the archangel Michael, along with the text of the familiar prayer invoking that heavenly warrior’s protection. As the film reaches its improbable, corpse-strewn climax, Sal misguidedly recites this prayer before launching an attack as vicious and conscience-deadening as anything served up by the ruthless traffickers he is meant to be combating.