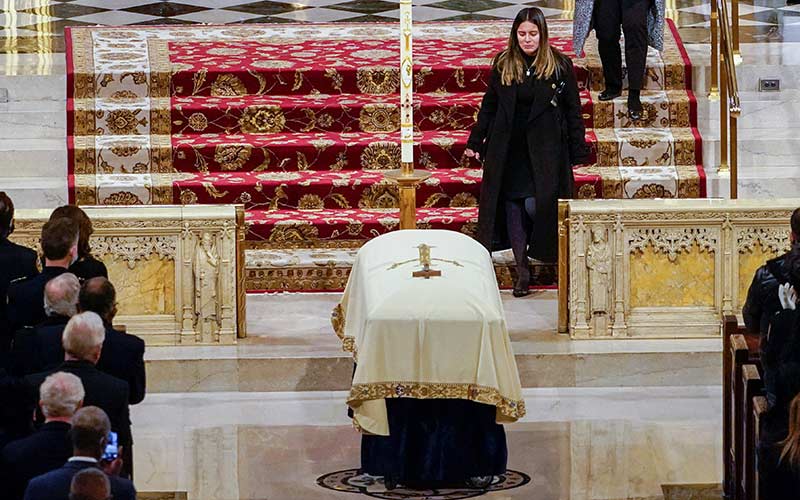 Dominique Rivera, wife of Officer Jason Rivera of the New York Police Department, walks toward her husband's casket during his funeral Mass at St. Patrick's Cathedral Jan. 28, 2022. Rivera was killed in the line of duty while responding to a domestic violence call. (CNS photo by Mary Altaffer, Pool via Reuters)

Jeffrey Rivera, the older brother of slain New York policeman Jason Rivera, said that his brother grew up with the “burning desire” to “to wear that uniform, to wear that badge” from the time he was a small child.

“As a kid, as a baby growing up, if you had something you had to watch on TV, and ‘Cops’ was on or ‘Chicago PD,’ good luck, forget about it,” he recalled in emotional remarks he delivered at his brother’s funeral Jan. 28 at St. Patrick’s Cathedral, which was covered live by several television networks.

“(Jason) would lay on couch watching (these shows) or listening to radio transmissions. He would wake up on the middle of the night policing. He was obsessed with a career in law enforcement.”

He also never got over his crush at age 5 on a little girl named Dominique, his brother said. Childhood sweethearts, Dominique and Jason grew up and got married.

The couple had been married just a few months when Jason, 22, was shot and killed in an ambush while responding to a domestic incident in Harlem Jan. 24.

His partner, Officer Wilbert Mora, 27, also was shot and was rushed to the hospital where he fought for his life. But he died from his wounds midday Jan. 26, and his funeral will be at St. Patrick’s Cathedral Feb. 2.

New York Cardinal Timothy M. Dolan presided at the Mass for Rivera. It was celebrated in English and Spanish in recognition of the officer’s Dominican roots.

Thousands of police officers — from near and far — lined up outside the cathedral to pay their respects. Inside thousands more filled the cathedral pews. The night before ordinary citizens joined police and other first responders at the cathedral for Rivera’s wake.

Among those who spoke at the funeral Mass were New York Mayor Eric Adams, Police Commissioner Keechant Sewell and Rivera’s widow.

Jason “was dedication, he was joy,” said his brother, Jeffrey. “He brought us so much joy. Everyone keeps telling me that I’m strong (but) my brother is giving me strength,” he said, adding that he couldn’t “really put it into words how broken I am, how broken my mother is, my father is. We feel empty.”

“I can’t put into words how shattered my family is,” he added, but “we feel strength from knowing God put a burning desire in my brother’s heart” to be a police officer. “We are so proud of him for saying yes to God. My family and I, we are confident my brother is next to God protecting us, protecting his NYPD family. We are proud of you, we love you,” he added.

“This has always been a city of lights and Jason River was one of its brightest,” with a “thousand-watt smile,” said Commissioner Sewell, who announced she was promoting Rivera to detective first grade posthumously.

She called the fatal shooting of Rivera and his partner “assassinations,” a “horror” that “shocks the sensibilities” and an affront to “every decent caring human being in this city and beyond.”

Sewell had a message for “the criminals who would victimize and instill fear in innocent people … who seek to dim the beacons of hope across these five boroughs”: The New York Police Department “will never give up this city, we will always prevail,” she said, receiving a standing ovation.

Outside the cathedral filled with men and women in blue, she said, was “a glowing wave of blue … a mosaic of men and women in uniform with a shine of tears in their eyes (who) will proudly carry on the extraordinary legacy of Detective 1st Grade Jason Rivera.”

Dominique Rivera, Jason’s widow, was the last to speak. As she started her remarks, deep emotion overcame her and she could barely get the words out, but she found her voice, saying: “I can’t believe all of this. It seems so unreal, like I am having one of those nightmares you never thought you’d have.”

She said she couldn’t believe her husband’s killing and funeral had brought her to St. Patrick’s this day, especially when she and her husband had just talked about wanting to visit the cathedral.

She expressed regret that the last morning her husband was alive, the couple had had an argument over his schedule.

“It’s hard being a cop wife sometimes. It’s hard being patient when plans are canceled or we’d go days without seeing each other, or you had a bad day at work,” Dominique said, but Jason “always reminded me it was going to be all right we were going to get through it.”

They went their separate ways to work that morning, then “I received a call I wish none of you would ever receive,” she told the congregation. She learned her husband was one of two police officers gunned down in Harlem. “My heart dropped that morning.”

“I know you’re beside me telling me I can do this and I’m trying, trust me I am,” she told Jason. “You made me feel alive. … Even though you won’t be here anymore, I want you to live through me.”

Dominique concluded her remarks with a pointed message to city leaders about the escalating number of murders and other crimes in New York City and officials failing to do much. She called out Manhattan District Attorney Alvin Bragg, who has been criticized for being soft on crime.

“The system continues to fail us,” she said. “We are not safe anymore, not even members of the service (police). I know you (Jason) were tired of these laws especially from the new D.A. I hope he is watching you speak through me right now.”

She paused as the congregation gave her a standing ovation. “I’m sure all of our blue family is tired too but I promise, we promise that your death won’t be in vain,” she said. “I love you to the end of time. We’ll take the watch from here.”