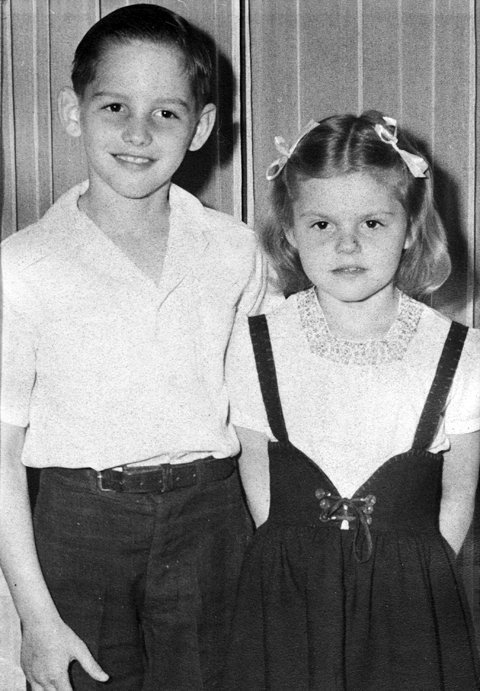 Matthew Clark with his sister Helen. (Photo courtesy of the Clark Family)

“This is Matt’s sister, Helen.”

I have probably heard those words of introduction hundreds of times through our 73¬Ω years together. Every time I hear them, I smile. I can’t help it. It has always been a great joy for me to be his sister.

One time, several years ago, while I was visiting Matt in Rochester, a woman asked me what it was like growing up with the Bishop of Rochester. Taken by surprise, I replied he wasn’t always a bishop! I’m sure she already knew that.

Anyway, I’ll try to give a brief rundown on what it was like growing up with Matt in our small village of Waterford, N.Y.

We are the third generation of Irish immigrants who came over from County Tipperary in the mid-1850s. They settled in Waterford. Not too many years later, our great-grandparents, William Clark and Bridget Feehan, settled into a little house on a corner, one block from the railroad tracks that run through the village’s west side. There they raised a daughter and five sons. The house is still there, now occupied by sixth-generation family members.

In July 1937, there arrived to share that home with our parents and grandparents Matthew Harvey Clark III.

By the time I came along, 17 months later, our parents had rented a flat in the village at the corner of Fourth and Broad. We lived upstairs over a combined restaurant and four-lane bowling alley. For us, it was ACTION CENTRAL. We were able to walk to our local public school at the other end of the block, to the neighborhood park, to the Hudson River for swimming, to the movie theater, and to the homes of relatives and friends all through the village.

In 1943, we moved back near the railroad tracks, one block away from our grandparents, on the “other side of the tracks.” Our home was literally no more than 20 feet from the tracks. The house would shake when trains pulled by huge steam locomotives thundered by.

Dad rode the commuter trains back and forth to work in Albany every day when we were growing up. Occasionally a morning problem developed. The small train station and limited boarding arrangements were on the opposite side of the tracks. If Dad hadn’t said his “good-byes” and crossed over in time, he missed the train to work.

In 1948, my father’s parents, Matthew and Charlotte, both passed away within six months of each other. While these events saddened us, they brought many welcome changes for our family. One was that our parents decided to move the four of us into our late grandparents’ home, which had been Matt’s first home. One great advantage was that it was on the same side of the tracks as the railroad station; Dad never missed the train again! In fact, he could stand in the kitchen, sipping his coffee and hear the train approaching with its whistle blowing. He’d watch at the window, see the railroad guard gates go down, walk over and board the train with ease.

In our “new” home, we were delighted to have the luxury of hot, running water. We no longer had to boil water for doing dishes, taking baths or washing clothes.

Another advance we made into the modern era was having our first “pop-up” toaster. What a treat! We no longer had to use that old “A-frame” toaster where we had to toast one side of the slice, open the “door” and turn the bread over to finish toasting the other side. I can remember Matt and I were so excited about the new contraption that we rushed home from school so we could make toast and smother it with peanut butter.

Not too much time passed before we got our very first telephone. I’d say that phone was THE one and only source of contention between Matt and me in our entire history together! We both wanted to answer it and would race to be the first. One of the first calls came one evening while we were at dinner. In turbo-speed, we both charged for the phone. I won’t tell you who won the race, but Matthew knows.

When we were teenagers, we not only wanted to be the first to answer the phone but each wanted to monopolize it with long conversations with girlfriends and boyfriends. Our soon-to-come first television was never a problem, as there weren’t enough channels to have much choice in viewing.

In 1951, Matt completed eighth grade at our public school. I’m not exactly sure how the transfer came about, but Matt, at the encouragement of our parents, enrolled in Troy’s Catholic Central High School. We were on a different schedule now: While I continued to walk to school, he had to ride the city bus to downtown Troy. In those days, there were about 300 in each grade at CCHS, compared to 50 or so in each class in Waterford. Tuition was $50 per year. For all the changes, Matt continued to do well in school — and he continued and broadened his participation in sports.

Mom and Dad encouraged me to follow Matt to Catholic High. I wasn’t thrilled with the idea, but I adjusted to our new school soon enough. And like Matt, I made new friends and kept the old ones as well.

Our parents never had a car while Matt and I lived at home. We rode the buses, or relatives and friends often provided transportation. It wasn’t until Matt and I had left home that Mom and Dad bought a car.

In the fall of 1955, Matt began college at Holy Cross in Worcester, Mass. I missed him “big time!” But you all know from write-ups about Matt’s history where he went from there.

I won’t embarrass him by telling you how wonderful a person I think he is: You no doubt “get my drift” from what I’ve already written.

Congratulations, Matt — and a wish for many more healthy, happy, productive years to come.