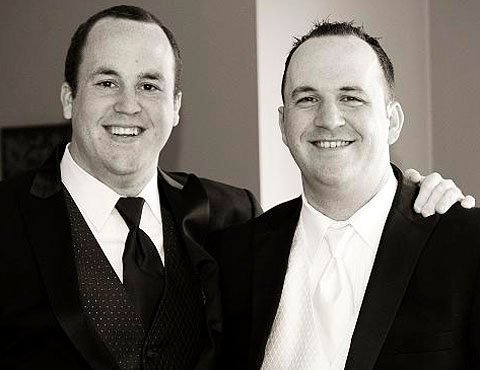 Andy Collier (left) and his brother Patrick are the new youth ministers for the SMASH youth group.

Andy and Patrick Collier both were very involved with the youth group at Sacred Heart Parish in Auburn when they were teenagers. Unlike most of their peers, however, their involvement with the group didn’t cease after they graduated from high school, and at the beginning of September the brothers became the new youth ministers for the SMASH youth group, which encompasses teens from St. Mary and Sacred Heart in Auburn as well as St. Ann in Owasco.

The Collier brothers will be filling the shoes of former youth minister Anna Comitz, who married over the summer and became Anna Nicpon. She will still be involved with Sacred Heart Parish, but she and her husband will split their time between Auburn and Rochester, said Nicpon, who is considering pursuing a new career in teaching.

"I am not leaving Sacred Heart. I’m just handing down the reins of youth ministry to two wonderful men that will carry on this wonderful program," she said.

Nicpon had been youth minister for Sacred Heart and St. Ann since 2002, when the previous youth minister, Stephanie Hessler, stepped down in order to spend more time with her family, Nicpon said. Nicpon’s oldest daughter, Erica, was concerned the parishes’ youth-ministry program would fade out after Hessler left, so Nicpon, who coached Catholic Youth Organization sports at the parishes at that time, brought her concerns to the pastoral administrator, Sister Chris Treichel, OSF.

"I was at the end-of-the-year CYO banquet and I went up to Sister Chris, whom I didn’t know, and said, ‘You can’t let youth ministry fall. I will help in any way, but I am not qualified to be the leader,’" Nicpon recalled.

Nicpon was surprised when parish leaders approached her and asked her to be the next youth minister. She agreed without really knowing why she was doing so, and she occasionally wondered why she took on the role.

"As the years went by I (began) to understand why I said yes. It was God’s plan for me," she said.

Nicpon earned her certification in youth ministry from St. Bernard’s School of Theology and Ministry in Pittsford and went on to build relationships with many teens and parents as she led youth-group meetings and retreats and shepherded teens on trips to National Catholic Youth Conventions throughout the country. In 2005 she became youth minister for St. Mary Parish in Auburn as well, and teens from the three churches have been coming together for youth-group meetings ever since.

"The opportunities and experiences were endless with youth ministry. It’s been very rewarding," she said.

Youth ministry became such an integral part of Nicpon’s life that she actually invited the teens in her youth group to take part in her July 3 wedding as lectors and extraordinary ministers of holy Communion.

"Oh my goodness, it was just spectacular," she said.

Nicpon met the Collier brothers early in her tenure at the Auburn parishes. The young men had been involved in Hessler’s youth group as teens, said Patrick Collier, who joined the group in 1995.

"I got involved primarily because my friends were doing it, and it seemed like fun," he said.

His brother joined the youth group when he saw how much Patrick, two years his senior, enjoyed the meetings.

"He always came home having fun. At the end of my eighth-grade year I joined," Andy Collier said.

Both Collier brothers continued to volunteer with the group even after they graduated and went on to college at SUNY Brockport.

"I really enjoyed working with the kids and continued chaperoning whenever I could," explained Patrick Collier, who currently teaches and coaches in the Auburn Enlarged City School District and works for Wegmans Food Markets Inc.

When Nicpon approached the Colliers and asked if they would be interested in taking over the youth group, the brothers discussed it with their wives and prayed about it before agreeing.

"Everything seemed to fit into place. It’s a special part of us. We definitely wanted to continue it," Andy Collier said.

Being able to work with his older brother is an honor and a blessing, he added.

"It’s not every day you get to work with your best friend. We’re looking forward to working together and building up the kids’ faith," he said.

The Colliers said they want to continue the work Nicpon started. They hope to help the teens learn about their faith as well as the importance of values, discernment and decision-making, and they hope to accomplish that goal by encouraging teens to attend youth-group meetings, retreats and such events as NCYC.

"Then they understand how cool it is to see all these people with the same fervor for their faith," Andy Collier said.

The SMASH youth group definitely is a Catholic youth group, but it’s open to teens of any faith who want to encounter to Christ, he added, noting that he and his brother also would welcome adult volunteers.

"Anybody who wants to grow their relationship with Christ through youth ministry is welcome. That’s how we got into it. We love what we do, and we’re hoping that anybody else that wants to have that same love that we have, we’d love to share it with them," he said.

"By them saying yes to youth ministry, I hope their lives will be as faith-filled and enriched as mine has been," she said.