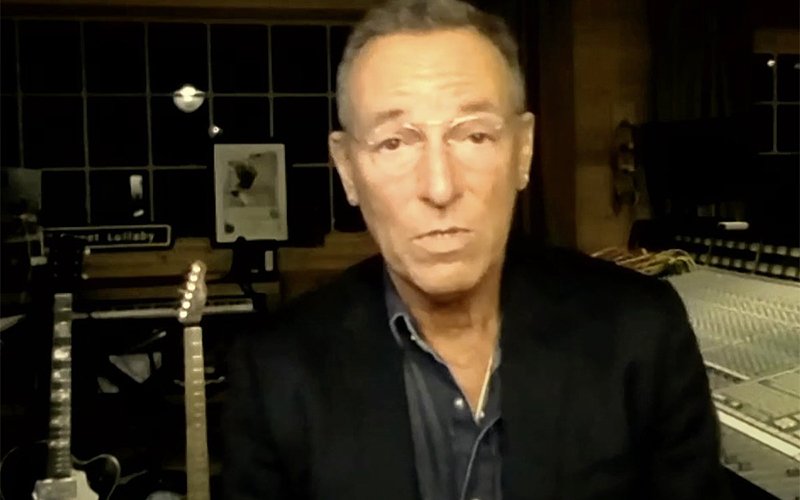 Bruce Springsteen is seen Sept. 10, 2020, on a Boston College YouTube video. The singer, songwriter and musician was initially scheduled to speak to first-year students in person, but instead addressed them via a Zoom webinar link from his home studio in Colts Neck, N.J. (CNS screen grab/YouTube)

WASHINGTON (CNS) — As this unusual school year gets underway, Boston College freshmen were reminded that they’ve already been through a lot and were urged — as college graduating seniors usually are — that they have to go out and change the world.

“You are the first coronial generation. You are already wisened by this experience, to appreciate the underappreciated. … We will soon look to you for answers for a safer and better world,” the students were told during the school’s annual freshman convocation, which like many things, switched to a virtual format this year.

The sage advice wasn’t just from school leaders but from singer, songwriter and musician, Bruce Springsteen, who was initially scheduled to speak to the students in person, but instead addressed them Sept. 10 via a Zoom webinar link from his home studio in Colts Neck, New Jersey.

“I wish we could have all been together tonight, but as you know, circumstances don’t allow,” he said, sitting beside his mixing board with two guitars leaning up against a keyboard behind him.

The hourlong program kicked off with student musicians and an opening prayer and also included a blessing for the freshmen and transfer students; a symbolic candle lighting; a welcome from the university’s president, Jesuit Father William Leahy; and an introduction of the night’s speaker by the university provost, David Quigley.

Then, The Boss, as he is known by fans, riffed for about 10 minutes on friendship, love, school, music, this current time and the need to vote, before spending about 20 minutes answering students’ questions.

He also spoke as an alumni dad, since his son, Evan, graduated from the Jesuit-run university in 2012.

He pointed out, to the students he couldn’t see, that he, like them, had a high school degree. He said he regretted not going on to college but that he learned from seeking out teachers and mentors “in libraries and on the street” and graduating from the cliched “school of hard knocks.”

Springsteen told the class of 2024 that they were embarking on a great adventure. “You can waste it, you can half-ass your way through it, or you can absorb every minute of what you’re experiencing and come out on the other end an individual of expanded vision, of intellectual vigor, of spiritual character and grace, fully prepared to meet the world on its own terms.”

He urged them to do something they love and also to find love and let themselves be loved.

He took love to another level too, saying they should love this country, but work to change it too.

“Learn how to be an informed, active and engaged citizen. Your country needs you, your vision, your energy and your love,” he said. “Love your country, but never fail to be critical when it comes to your country’s living up to your and its ideals. Listen to the voices calling you from our founding documents and keep faith with them.”

If the freshmen hadn’t grown up listening to Springsteen’s top hits, “Born to Run,” “Thunder Road” or “Dancing in the Dark,” they were at least familiar with where the rock star — with a five-decade music career as both a solo artist and leader of the E Street Band — came from.

His 2016 autobiography, “Born to Run,” was selected as the assigned reading material for the school’s freshman program and each student was sent an e-copy of the book, and a reflection guide, over the summer.

In the webinar’s introduction of Springsteen, the university provost said the artist included Catholic imagery in his work and explored grace and beauty even in tough times.

And the musician alluded to some of this in the question-and-answer session. When asked about the role of faith in his music, Springsteen acknowledged that he has had “an ambivalent relationship” with his faith.

He said he would probably call himself a lapsed Catholic, noting that he “went to Catholic school for eight years, and it almost cured me of Catholicism permanently.”

Even though he thought he could walk away from his faith after those eight years, he said he couldn’t.

“I was wrong. I really couldn’t. I could walk away from my religion, but not my faith,” he said. He also said his faith has “remained with me, informing my writing, affecting the language that I wrote in and the themes I wrote about.”

He said he has often used biblical language in his songs, and he considers himself “primarily a spiritual song writer. I make music that ultimately wants to address your soul. I made my peace with my Catholic upbringing … and I have had to nod to the fact that I wouldn’t exactly be who I am without it.”

The gathering was not the typical format where students carry lit candles at the end and walk the path on campus that they will take as graduating seniors. Despite the change, the event still held significance, maybe even more than ever, said Ali Bane, the school’s first-year experience director.

During the webinar, she said the convocation is a tradition that Boston College “holds very dear” and that this year, “perhaps more than ever, preserving ritual and tradition seems particularly important.”