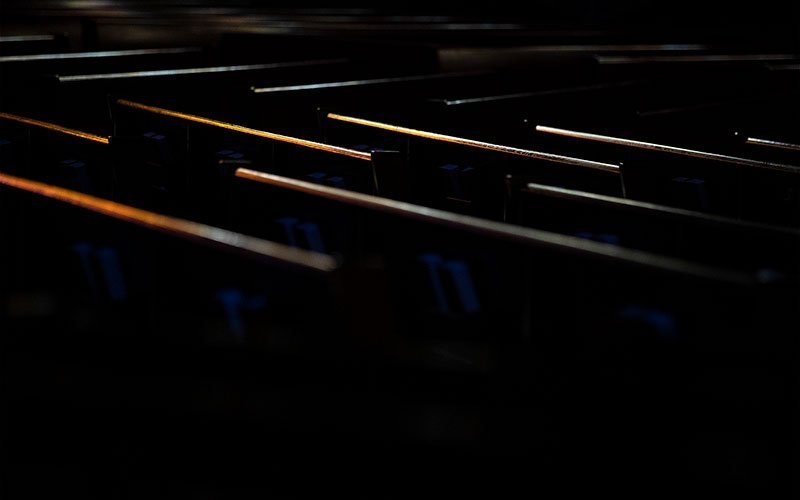 Pews are seen in this illustration photo. The Diocese of Buffalo, N.Y., has launched an initiative to "reenvision the Catholic Church" of western New York. (CNS photo by Tyler Orsburn)

BUFFALO, N.Y. (CNS) — Bishop Edward B. Scharfenberger, apostolic administrator of the Diocese of Buffalo, has launched a broad-based initiative focused on reenvisioning the mission of the Catholic Church of western New York “and bringing about diocesan-wide renewal,” according to a May 22 diocesan news release.

The initiative will be led by the diocese’s new chief operating officer, Franciscan Sister Mary McCarrick, appointed to the post April 18; Msgr. David LiPuma, chair of the priests’ council; and James J. Beardi, chair of the Diocesan Finance Council.

They will work closely with pastors and parish leaders “to obtain a full picture of the challenges facing the diocese and define steps to ensure the long-term sustainability of Catholic ministries and institutions,” including “the extensive ministries of Catholic Charities of Buffalo,” the diocese said.

“We have no more urgent priority than to reassert the vital relevance, role and tremendous impact of our Catholic faith in serving so many needs across Western New York,” Bishop Scharfenberger said in a statement. “The very harsh realities that have caused so much hurt and disappointment and damaged credibility in recent years must in no way obscure the vitality of our parish communities.

“It is in these vibrant parish families that we see such remarkable determination to live the Gospel of Jesus Christ in conspicuous ways that lift and empower others, while creating hope and opportunity among those most in need,” he continued.

Bishop Scharfenberger, who heads the Diocese of Albany, New York, was named Buffalo’s apostolic administrator by Pope Francis Dec. 4, 2019, the same day he accepted the resignation of Buffalo Bishop Richard J. Malone, then 73 and two years shy of the age at which canon law requires bishops turn in their resignation to the pope.

Bishop Malone told diocesan Catholics he had asked Pope Francis to allow him to retire early so the people of the diocese “will be better served” by a new bishop who is “perhaps better able” to bring about “reconciliation, healing and renewal” in addressing the abuse crisis.

On Feb. 28, 2020, the Buffalo Diocese filed for Chapter 11 bankruptcy protection. The action in U.S. Bankruptcy Court for the Western District of New York came as the diocese faces about 260 lawsuits that filed under New York’s Child Victims Act, which suspended the statute of limitations for abuse claims for one year beginning last August.

Citing annual operating losses and declining enrollment, the Diocese of Buffalo announced Feb. 5, 2020, it will close its seminary at the end of the academic year. On April 8, the diocese announced it had selected St. Mary’s Seminary and University in Baltimore for its priestly formation program.

Bishop Scharfenberger said the new initiative he is launching “to bring about renewal” across the Buffalo Diocese “is all about creating greater reliance on one another, and creating even greater impact by combining our resources and harnessing the abundant expertise, talent and zeal of our people to bring about immense good.”

This process will involve several components, according the diocesan release:

— Conducting a thorough assessment of all aspects of Catholic ministries and operations, “looking closely at the current construct of parishes and schools.

— Identifying resources that are able “to be shared and leveraged more broadly.”

— Making decisions about the long-term viability of parishes and schools, as well as other programs carried out at the diocesan level.

Exacerbating financial challenges facing parishes and diocesan operations has been “the emergence and continuing threat of the COVID-19 pandemic,” the diocese said.

There has been a sharp decrease in parish revenues “as well as an anticipated decrease” in donations to the annual “Fund for the Faith” appeal. As a result, diocesan officials will be look at potential mergers of parishes and schools and also consider potential partnerships with other organizations and donors committed to Catholic education and the ministries officials will determine are vital.

Current financial realities also mean the diocese cannot continue the subsidy it has provided to Catholic schools, so school leaders, working with School Superintendent Michael C. LaFever, will be “developing options” to allow Catholic education to continue, the diocese said. Currently, there are 34 parish elementary schools throughout the diocese.

“The responsibility for Catholic education must be seen as an equal one, which begins in the home and which is then supported in our parishes, and promoted by our dedicated teachers, priests, religious and other mentors throughout early childhood and into adulthood,” said Bishop Scharfenberger.

The bishop has daily meetings with the vicars forane, who are the bishop’s 12 regional representatives, and with the priests’ council, pastors and parish administrators.

The eight-country Buffalo Diocese covers 6,500 square miles and is home to approximately 571,000 Catholics. It has 161 parishes, a total of 49 Catholic schools, over 360 priests, 546 women religious and 129 permanent deacons, and “a wealth of lay leaders and committed volunteers who serve God’s people every day.”