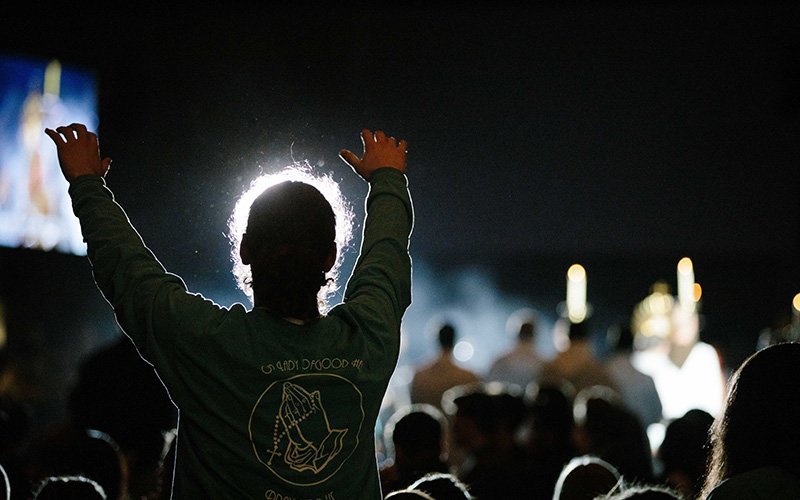 A young person prays Jan. 5, 2019, during the SEEK2019 conference at the Indiana Convention Center in Indianapolis. Ultimately it's up to college students to decide for themselves how to build their spiritual lives. (CNS photo courtesy Fellowship of Catholic University Students)

A couple weeks before my three sons left for college, I took each to supper. They chose the restaurant, reflecting their personalities: a Thai place, a steak house, a premium burger grill. I picked up the tab, but I wasn’t there for dinner. I wanted to talk.

I gave each a copy of a card a cartoonist friend had given me some years before. Spoofing a Monopoly game card, it depicted Pope Francis letting a bird out of a cage and the caption: “Get out of hell free!”

I told each son to put the card in his wallet as a reminder that he could come home any time. Nothing he could ever do, I said, should ever make him feel like he couldn’t come home. No circumstances would close our home, our love, to him. I couldn’t promise I wouldn’t be angry or disappointed or saddened by these unknown, unimaginable actions, I said, but I would always welcome him home.

If you ever feel like you’re in hell, use the card and come home, I told them.

I know it all sounded overly dramatic to 18-year-olds excited for life’s next chapter, but I worry about my sons.

I know they are not evil young hooligans. I can’t imagine them getting arrested or kicked out of school. I know they are fine young men respected by their peers, teachers and bosses.

I wanted them to embrace college life fully. Learning is more than classwork and studies. I told them to explore, to seek out new, different people and experiences. Have fun!

I also know they face challenges my generation never faced at the same age. A 2019 study by global health service and insurance company Cigna found that “loneliness was at epidemic levels” and the loneliest cohort is Generation Z, people born after 1996. Nearly 79% of Gen Z respondents reported feeling lonely.

The Springtide Research Institute, which issues an annual “State of the Religion and Young People” report focused on “the lived realities of young people as they navigate shifting social, cultural, and religious landscapes,” is finding similar data.

Born into an era of personal and social upheaval, Gen Z doesn’t remember a time before the war on terror. They watched families struggle through financial crises in the Great Recession.

They are the leading edge of America’s demographic shift: 48% are non-white. They are more likely to have grown up amid diverse family structures — single parent and multiracial households — at a time when gender roles are blurred. Their lives are integrally entwined with technological innovation and ubiquitous media.

According to the Springtide Institute, “Identity today is increasingly seen as something that each individual personally constructs piece by piece, rather than something handed down from a prior generation or imposed by a community.”

On the Jesuitical podcast of America magazine, Springtide’s executive director Josh Packard was more colloquial: “As they are looking at the detritus of social life around them, (young people) are trying to figure out how to make a meaningful life out of it.”

What’s a parent to do? “You want to be one of the sticks out of which they build their spiritual home. That is a longer play,” Packard said. You do that by forming relationships with them so that you can be part of their conversation with life.

My wife and I — perhaps unwittingly — laid out such a game plan years before. We grounded our boys in our faith tradition through Catholic school, religious education and sacramental prep. We modeled personal prayer and church attendance for them. We talked openly and honestly about beliefs and practices. This was their foundation. The conversation continued as we prepped for college.

On campus tours, I made sure we found the Newman Center and tried to meet the staff. Whether my sons joined those activities was up to them — and the dynamics of the ministry staff — but at least introductions were made. It was one resource among many.

My major concern wasn’t whether or not they attended Sunday Mass. I want to make sure they made the connections they needed to stay emotionally and mentally healthy.

I encouraged them to join as many extracurriculars as their studies allowed. I suggested they check out campus ministry service projects but also other activities that matched their interests and are grounded in justice values — Engineers Without Borders, tutoring, choral groups and volunteering at a children’s hospital. I wanted them to meet caring mentors who, in Packard’s words, would continue the conversations we had started.

And then we let them go.

My wife and I phone and text regularly, but not often. We visit only occasionally. One thing we insist on is that they come home for the holidays. Spring breaks and summers are theirs, but the holidays are for home.

It was tough but so far so good. None has used his card — yet.

(Dennis Coday has 35 years of experience as a writer and editor in Catholic media. He freelances from Liberty, Missouri.)

Tags: Newman Community
Copyright © 2023 Catholic News Service, Inc. All rights reserved. Linking is encouraged, but republishing or redistributing, including by framing or similar means, without the publisher's prior written permission is prohibited.