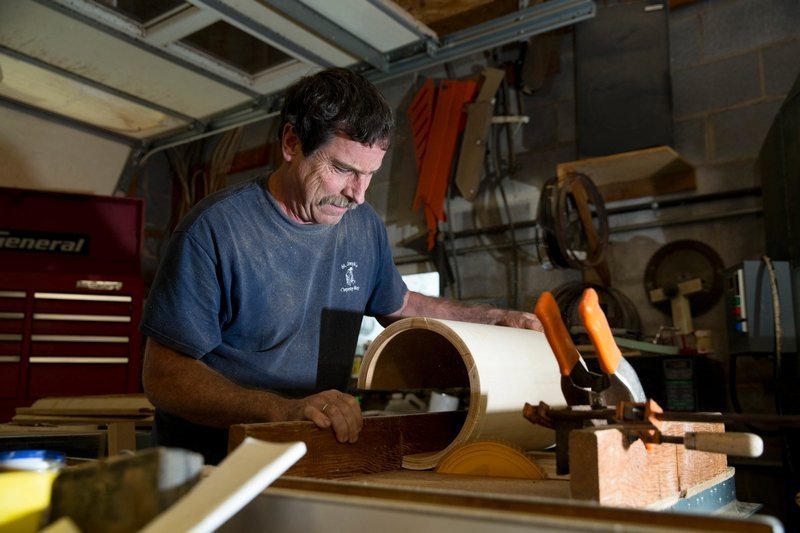 Deacon Dave Cahoon works on a column for the altar that will be used during Pope Francis' Sept. 23 Mass at the Basilica of the National Shrine of the Immaculate Conception in Washington. The altar is being built at St. Joseph's Carpentry Shop in Poolesville, Md.

POOLESVILLE, Md. (CNS) — They say lightning never strikes twice in the same place, but at the St. Joseph Carpentry Shop along a country road in Poolesville, Deacon Dave Cahoon is having his second "once-in-a-lifetime" experience in the past seven years.

In 2008, Deacon Cahoon built the altar Pope Benedict XVI used for his papal Mass at Nationals Park in Washington, and this summer, the carpenter is building an altar Pope Francis will use at the Basilica of the National Shrine of the Immaculate Conception during his visit to the nation’s capital.

On Sept. 23, on the east steps of the national shrine overlooking The Catholic University of America campus, the pope will celebrate the canonization Mass for Blessed Junipero Serra, the 18th-century Spanish Franciscan missionary to California.

"It’s just by the grace of God," said Deacon Cahoon, describing the honor and the blessing of building two papal altars.

The experience of building Pope Benedict’s altar, chair and ambo went perfectly eight years ago, the carpenter said, noting that altar and ambo are now used in the chapel at the Archdiocese of Washington’s St. John Paul II Seminary.

Now Deacon Cahoon is working as part of a team of 12 craftsmen, preparing 14 pieces of furniture for the canonization Mass, including the altar, chair, ambo and side chairs.

Deacon Cahoon just finished restoring the old steeple at St. Mary Church in Barnesville, where he serves as a deacon. That project involved new slate, brickwork and painting, with a new cross put on top of the steeple.

Now he and his employee, Carlos Hernandez, are working hard in his shop on the altar for the papal Mass.

"This is the first piece of 14. I’m on pure adrenaline," he said, laughing, later noting that building the furniture will require thousands of hours of work by the team.

A friend and fellow Catholic, Doug Fauth, the owner of Carriage Hill Cabinet & Millwork Co. in Frederick, will be building the papal chair and side chairs out of cherry wood.

The altar was designed by Catholic University architecture students Ariadne Cerritelli, Matthew Hoffman and Joseph Taylor, and it will be used in the national shrine afterward.

In an interview with the Catholic Standard, Washington’s archdiocesan newspaper, Deacon Cahoon said he was inspired by Pope Francis’ encyclical "Laudato Si’" on the environment to use materials for the altar that did not involve any exploitation of the environment or of indigenous workers.

The altar includes a colonnade of 10 individual columns crafted from poplar, with its main structure made of medium-density fiber board, which he said offers stability.

Craftsmen from Rugo Stone of Lorton, Virginia, will build the altar top with Botticino Classico, a type of Italian marble. The deacon said his plan is for the altar and ambo to be completed within a couple of weeks, so artists at the national shrine can apply a faux finish to it to match the color of the columns around the shrine’s main altar.

Deacon Cahoon named his carpentry shop after St. Joseph, the carpenter and Jesus’ earthly father, and he tries to emulate his shop’s patron saint. "I think for him, work was a prayer."

The deacon begins each day with morning Mass at St. Mary Church. "It (the Eucharist) is the center of my world, that’s where I begin," he said.

Hernandez said he’s grateful for the opportunity to join Deacon Cahoon in working on a second papal altar. Speaking in Spanish, as Deacon Cahoon interpreted his words in English, Hernandez said, "I’m able to put back in what God has given me. It’s an amazing thing for my life."

For Deacon Cahoon and many of those working with him on the papal Mass furniture, the project is a work of faith. "The faith journey is the big thing," he said. "You go along for the ride, and all along the way, you see the work of the Holy Spirit."