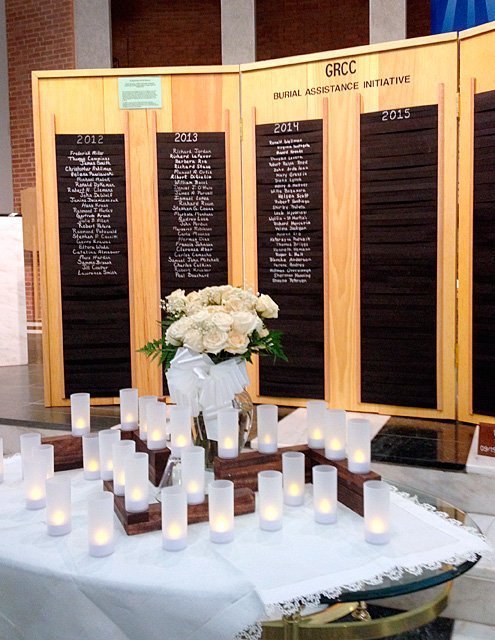 A traveling memorial, created as an Eagle Scout project by Matthew Bartlow, recognizes those buried through the Greater Rochester Community of Churches-Faith in Action Network's burial services program. The program hosted a memorial service Feb. 8 for those who had died without family connections.

IRONDEQUOIT — It did not matter if some of the people at Diana Lynch’s memorial service did not know her.

What mattered was that they were standing ankle-deep in mud in a downpour to pay respects to her.

"I felt like God’s presence was there. I just felt a great comfort," said her sister, Carol Cuomo of Rochester.

Cuomo said she had lost touch with her sister and didn’t know of her death in July until she received a phone call three weeks later from Sister of St. Joseph Beth LeValley, who is part of the burial services program with the Greater Rochester Community of Churches-Faith In Action Network.

After being informed of a death by the Monroe County public administrator, the network assists at and attends the funerals of community members who have no or few family members or friends available to claim their bodies and make funeral arrangements.

On Feb. 8, Peace of Christ Parish at St. Ambrose Church hosted a community memorial service "for those whom we do not want forgotten" who had been buried in 2014 and 2015. The names of 27 people who fell into that category were read and remembered during the program.

A letter was read from the niece of World War II Naval veteran Douglas Levere. His niece lives in Florida and could not travel for his funeral in January, but she was able to take part in the ceremony via phone. Later, she wrote to express gratitude to all those who stood in the 9-degree weather at Riverside Cemetery to remember her uncle.

Friend Lois Geiss shared memories of a homeless man known as Wolfie, who many knew for decades yet only could piece together clues of his life.

"Where was he born? What was his heritage? Even though St. Martin’s Place knew him almost 30 years, we did not know him like some others," Geiss reflected.

She said he was orderly and intelligent, knew German and likely was well-educated; she sometimes saw him at the library reading books. Yet he rarely spoke, and when he did, it was hard to understand him, she said, musing over a gift of a used AA battery that he had once given her.

"Each of these burials has its own story," Sister LeValley said. "Even the ones where there is no story and there is no family. There’s a story there too."

The burial services program has spawned a new effort to better get to know some of the community’s least connected. Volunteers have started a program of going to area shelters and soup kitchens to interview clients with the question: "Who would you want to be contacted if something were to happen to you?"

The goal is to help people to designate in writing their end-of-life and funeral wishes and choose a contact person from among family and friends to be their agent. By signing such forms, it would allow a person’s remains to be take care of promptly; without wishes designated, a person’s remains may languish at a hospital or other facility for weeks until family members can be located and contacted, said Kristen Catalano-Kildea, executive director of Isaiah House, a home for the dying. Many often say that no one will notice if they die, she said.

"It saddens me when I look into the face of a human being who doesn’t feel they have made a difference," Catalano-Kildea said.

That’s when she informs people that there will be people attending their funerals, and helps them to see that they do matter to the world.

"Something in them changes before my eyes," Catalano-Kildea remarked.

Sister LeValley said additional volunteers are always needed for the burial services program, including faith leaders who are able to celebrate memorial services.