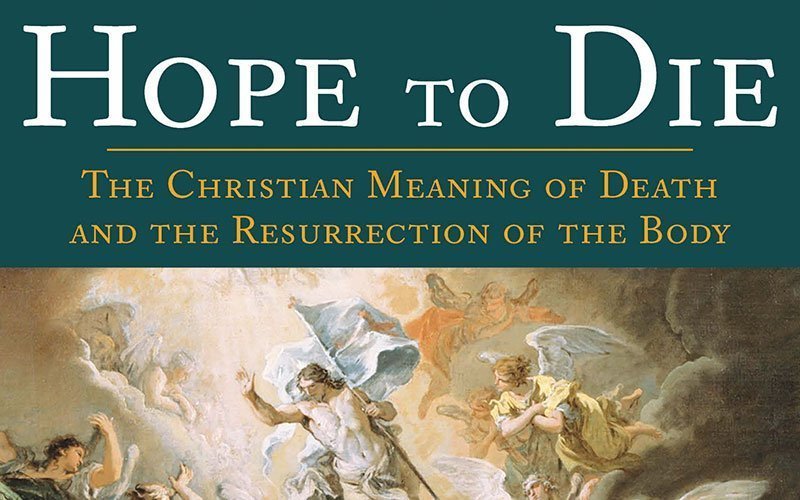 This is the book cover of "Hope to Die: The Christian Meaning of Death and the Resurrection of the Body" by Scott Hahn with Emily Stimpson Chapman. The book is reviewed by Mitch Finley. (CNS)

Scott Hahn is a prominent former Presbyterian minister who became Catholic. He is professor of biblical theology and the new evangelization at Franciscan University in Steubenville, Ohio.

His new book zeroes in on the Christian meaning of death and resurrection with a particular focus on cremation compared to the traditional practice of burial.

Hahn accepts the church’s acceptance of cremation, but he has serious doubts about how appropriate cremation is despite it having received official church acceptance — as long as certain conditions are observed — in 1963. He writes that “the increasingly widespread practice of cremation seems to me to be a symptom of a very real problem in how we see our bodies, in life and in death.”

Hope to Die invites the reader to think about his or her own personal mortality and its meaning in the context of faith. Hahn’s central theme is his discomfort when it comes to cremation.

In 13 chapters plus an introduction and a postscript — the latter written at the beginning of the COVID-19 outbreak — he discusses the meaning of the doctrine of the resurrection of the body; the meaning of death in both physical and spiritual senses; the body as “sacrament of the person”; the meanings of Incarnation and Trinity; the implications of confusing God with his creation; the holiness of the body; physical and spiritual resurrection; how the Eucharist and the resurrection of the body are related; heaven and hell; the earthly body and the glorified body; the conundrum of why cremation has become popular; what the church really teaches about cremation and the history behind that teaching; and reasons to reevaluate the wisdom of choosing cremation.

Hahn’s summary of the church’s position on cremation today: “It does not approve of cremation; it permits it. It does not permit the scattering of ashes or their retention in homes; it forbids it. It considers burial the most fitting way to care for the bodies of the dead until they rise again on the last day and urges us to follow that recommendation.”

Hope to Die is a serious book about a serious topic. One fact that Hahn acknowledges but does not address, however, is that many, perhaps most who choose cremation, do so because it is considerably less expensive than burial. Hahn writes: “As burying the dead became more and more expensive, cremation became both the economic and practical choice for families that didn’t want to spend $5,000-$10,000 on a funeral (the average cost in 2016) and thousands more on a burial plot and headstone. Today, cremation costs between $800-$3,000, which, when finances are the only consideration, is a significant difference.”

Hahn’s theological and philosophical discussion of cremation vs. burial would be bolstered considerably were he to respond to the practical economics of the issue.

Today burial is beyond the means of many Catholics; one might even suggest that burial is for the rich. This is far from a minor consideration and even has profound ethical implications. If cremation borders on morally objectionable, which Hahn implies, should parishes be ready to help families pay for burial and all that goes with it?

This is not likely to happen, so arguing at length that cremation is less than Christian may be less than helpful to the faith of the countless good Catholics who are anything but rich.

Finley is the author of more than 30 books on popular Catholic theological topics.