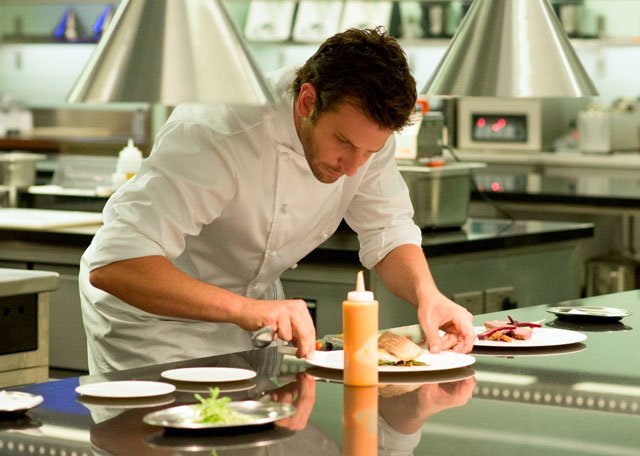 Bradley Cooper stars in a scene from the movie "Burnt." The Catholic News Service classification is A-III -- adults. The Motion Picture Association of America rating is R -- restricted. Under 17 requires accompanying parent or adult guardian.

Can’t get enough of TV cooking star Gordon Ramsay’s trademark rages and rants? Their fictional equivalent is as close as your nearest multiplex, courtesy of the ego-driven culinary drama "Burnt" (Weinstein).

There’s a pleasant enough dessert awaiting audiences toward the end of director John Wells’ predictable conversion story. But its bad-boy protagonist’s tantrums make for an entree that many will find over-spiced — while some of the film’s thematic side dishes will not agree with palates attuned to traditional values.

Who’s that guy with the motorcycle, the leather jacket and the mad kitchen skills? It’s suave but volatile — make that volcanic — chef Adam Jones (Bradley Cooper).

Although he well deserves a novelty apron declaring him the World’s Greatest Cook, perfection-hungry Adam is a troubled soul. In fact, as "Burnt" opens, Adam’s alcohol and drug addictions have caused the Paris-trained toque’s once promising career to crash.

After completing a self-imposed penance — the shucking of 1 million oysters, only the last of which he eats in celebration — clean, sober and temporarily celibate (dames, don’t ask!) Adam is ready to return from exile via a well-choreographed comeback. The first step in his plan is to take over the faltering kitchen of the prestigious London restaurant run by his old colleague from the City of Lights, gifted maitre d’ Tony (Daniel Bruhl).

But Adam’s ultimate goal, once this upscale foothold has been secured, is to use it to ascend to the summit, the pinnacle, the "ne plus ultra" of culinary achievement, a three-star rating from the folks behind France’s Michelin Guide. If the very mention of those venerable red-bound volumes has not caused you to thrash about in uncontrollable ecstasy, then "Burnt" may not be the movie for you.

Unfortunately for those who have to earn their living at Adam’s side, and under his direction — "Yes, Chef!" — his obsessive pursuit of those coveted astronomical, gastronomical symbols is marked by obscenity-laden lectures berating all and sundry. Pommes frites of an imprecise and varying width? Insufferable! A slap in the face of Western civilization! And so forth.

Prominent among the victims of Adam’s ill-tempered outbursts is another old pal from his days in the French capital, Michel (Omar Sy). Although Adam betrayed Michel in spectacular fashion during the course of his booze- and narcotics-fueled downward spiral, the two have since reconciled.

New to the scene of Adam’s wrath, but catching her fair share of his flak, is his plucked-from-obscurity sous chef — and eventual true love — the fetching Helene (Sienna Miller).

Abundantly talented but entirely lacking in tranquility or any semblance of consideration for others, Adam will register with religiously grounded viewers as the embodiment of a familiar type of secular pathology. Absent any consciousness of the real deity, he elevates his craft into an idol before which all must kneel — and to the fuming demands of which all must be sacrificed.

Alongside the irritating curry of Adam’s impatience, screenwriter Steven Knight serves up a subplot about Tony’s undisguised but unrequited love for the hunky hash-slinger. There’s a complex pathos in the discreet treatment of this subject, with Tony resigned to the impossibility of his desire and to the vaguely comic figure he cuts as a result of it. Ironically, his submission to the absurdity of his situation lends him a certain dignity, a pre-Stonewall sort of pride not to be found among clamoring protesters.

As Adam undergoes his inevitable enlightenment, simultaneously opening up and calming down, we’re subjected to yet another instance of the big-screen maneuver whereby any group of people — in this case, the kitchen staff — can form a "family" based on shared interests and mutual support. While all natural clans encountered at the movies these days appear to be dysfunctional, these ersatz families always seem to get along swimmingly.

Whatever doubtful savor such a trope may originally have possessed, its flavor has long since gone flat.

The film contains cohabitation, mature themes, including homosexuality, a same-sex kiss, about a half-dozen uses of profanity as well as constant rough and occasional crude language. The Catholic News Service classification is A-III — adults. The Motion Picture Association of America rating is R — restricted. Under 17 requires accompanying parent or adult guardian.