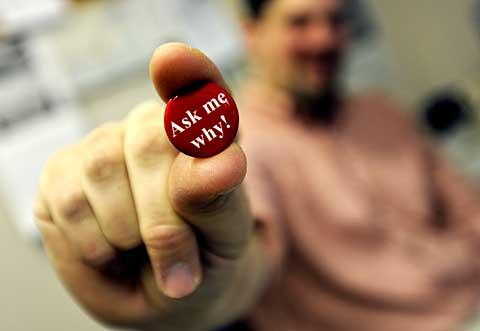 “Ask Me Why” buttons will circulate around the diocese as part of the Spirit Alive! spiritual renewal.

Should you ever pose the "why" question to somebody wearing a button with those words, be prepared for some reflective discussion about the Catholic faith.

"Ask Me Why" buttons will circulate around the Diocese of Rochester in upcoming months as part of the Spirit Alive! spiritual renewal. They’re due to be introduced through a pilot program in select parishes around the time of Pentecost Sunday, which this year falls on May 23. Participating parishes will support the effort by making buttons and explanatory brochures available to all; arranging coffee hours to distribute buttons and give details on the initiative; and offering "Ask Me Why" discussion evenings.

Ideally, people who don the buttons should be prepared to explain why they’re Catholic and what elements of the faith are important to them, such as celebration of sacraments and rituals; belonging to a parish community; being inspired by the saints; and appreciating the Catholic Church’s emphasis on social justice.

"It’s not necessarily doctrine and teachings but sharing your experience, why I love my faith," said Shannon Loughlin, a Spirit Alive! team member who also serves as diocesan director of young-adult and campus ministry.

Unlike a bumper sticker or the like, the goal of "Ask Me Why" is not to display a message but to elicit conversation. Loughlin said this could happen at any time, in any place and with anybody — "a natural encounter during the day." And it doesn’t necessarily have to be a lengthy exchange: "People could benefit from knowing one thing about my faith," she said.

When encountering folks who either state opposing religious viewpoints or don’t wish to talk any further, Loughlin said it’s important to maintain an air of respect. She suggested that in those instances, it’s best not to engage in heated debate but simply reiterate the positive points of being Catholic. In addition, Loughlin emphasized that those wearing buttons should not come off as being lecturers or proselytizers — but rather, simply planters of positive seeds.

"As a disciple, I am called to share what I believe," Loughlin said. "The Holy Spirit is the one transforming people. I’m just working on behalf of the Holy Spirit."

By and large, the button campaign is designed as a comfortable way of sharing one’s Catholic beliefs that doesn’t call for taking much risk. This is important because Loughlin acknowledged that many Catholics, though devout in their practices, are hesitant to talk about their faith and need to ease into the kind of role that wearing an "Ask Me Why" button entails. She added that the initiative will not only enlighten others about the goodness of being Catholic, but help those wearing buttons grow in their own faith through self-reflection on how they might respond when asked "why."

"Ask Me Why" reflects the strong focus on evangelization through Spirit Alive!, which began in Lent 2008 and is currently in the final of its three movements. Other ways to spread the faith can be found at www.dor.org/ec and its "52 Ways to be an Evangelizer in the Catholic Church" link, which lists such suggestions as keeping a Bible on your desk at work and being ready to say why you read it; sharing with a friend how God is at work in your life; inviting a neighbor to join your prayer group; inviting family and friends to attend church with you; joining an ecumenical group; and citing your faith when someone asks why you were nice to somebody who wasn’t nice to you.