Buzz Lightyear blasts off in cinemas with some controversy - Catholic Courier 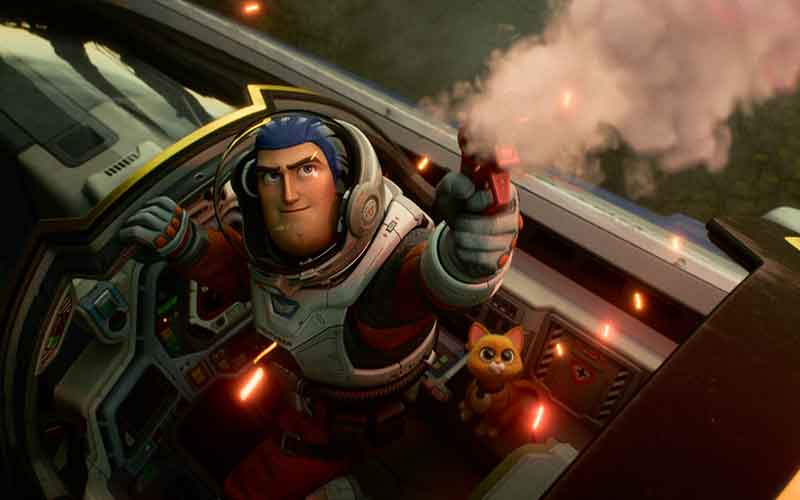 This is a scene from the animated movie "Lightyear." (CNS photo by Disney/Pixar)

NEW YORK (CNS) — “Lightyear” (Disney) blasts off in cinemas with controversy in its wake.

In what is becoming a bad habit for the Mouse House (witness the “pro-choice” theme in “Turning Red,” or the heroine with two moms in “Dr. Strange in the Multiverse of Madness”), Disney injects the objectionable into what would otherwise be wholesome fare for the entire family.

In the case of “Lightyear,” a “Toy Story” origin story, same-sex marriage is the issue. A prominent female character, Alisha Hawthorne (voice of Uzo Aduba), gets engaged to a woman, shares a kiss, marries and raises a family.

The endorsement, unnecessary and regrettable, is, sadly, the only takeaway from “Lightyear,” a gloomy and decidedly unfunny tale of the fan-favorite space ranger, Buzz Lightyear (voice of Chris Evans).

Alas, there’s no buzz in this Buzz. The delightful self-absorbed goofball of four “Toy Story” films is melancholy, uncertain and in need of a good therapist. He finds one in a robotic cat called Sox (voice of Peter Sohn).

The story, by Jason Headley and director Angus MacLane, also lacks pizzazz. With a crew led by his ranger sidekick Alisha (together they coin the catch-phrase, “To infinity and beyond”), Buzz pilots a spaceship to an uncharted planet named Tikana Prime.

Encountering hostile life forms, the crew evacuates in haste, but the ship crashes. Lost in space, the castaways establish a colony while awaiting a rescue.

One year passes, and Buzz volunteers to test a new fuel source which could hold the key to escape. The test has an unexpected side effect: For every minute he spends in the air, four years pass down on the planet.

Headstrong and determined, Buzz perseveres, and 62 years pass by. Alisha is now a grandmother, and her granddaughter, Izzy (voice of Keke Palmer), seeks to follow in her ranger footsteps.

Meanwhile, things are not going well down on Tikana Prime: robots commanded by Emperor Zurg (voice of James Brolin) have invaded the planet.

Buzz rises to the occasion, assembling a motley crew to attack Zurg’s ship, including Izzy, Mo Morrison (voice of Taika Waititi) and Darby Steel (voice of Dale Soules). Throw in Sox and you have the usual merchandizer’s dream.

Missing from “Lightyear” is the joy, wonder and humor of the Disney-Pixar space classic “Wall-E.” Instead there are echoes of classic sci-fi TV and films, from “Star Trek” and “Star Wars” to “Alien.”

Buzz, it turns out we hardly knew you -– and after “Lightyear,” maybe wish we didn’t.

The film contains cartoonish action sequences, a same-sex kiss and a benign view of same-sex marriage. The Catholic News Service classification is A-III — adults. The Motion Picture Association rating is PG — parental guidance suggested. Some material may not be suitable for children.