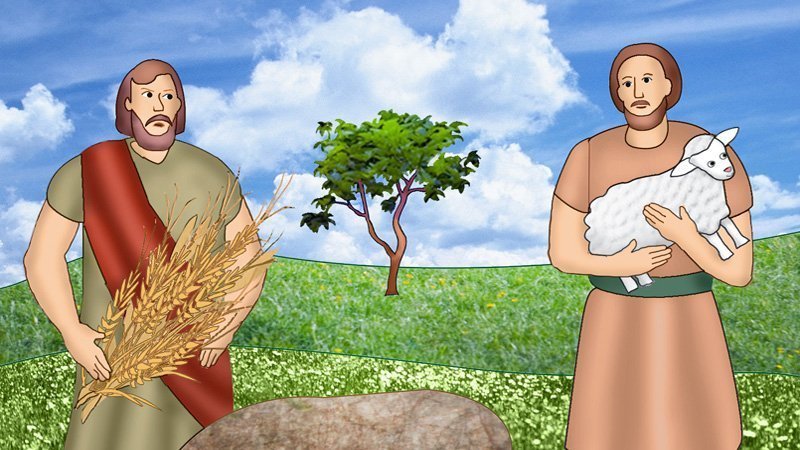 After Adam and Eve disobeyed God, they were banished them from the Garden of Eden.

After leaving the garden, Adam and Eve started a family. They had two sons. The eldest son was named Cain, and the younger one was named Abel.

When Cain and Abel grew up, they each chose a different profession. Cain tilled the earth and grew crops, while Abel tended flocks and raised sheep.

After a time, the two brothers decided to make an offering to God.

Cain offered God some of his crops, and Abel offered one of the first and best offspring from his flock.

God was very pleased with Abel’s offering but not with Cain’s.

Cain was devastated. Then he became angry.

“Why are you so resentful and crestfallen,” God asked him. “If you do well, you can hold up your head; but if not, sin is a demon lurking at the door: His urge is toward you, yet you can be his master.”

Even though God warned Cain not to give in to sin, Cain did not listen.

Instead, Cain went to talk to his brother.

Once the brothers were in the field, Cain attacked Abel and killed him.

After a time, God came to speak with Cain.

“Where is your brother Abel?” God asked.

“I do not know. Am I my brother’s keeper?” Cain snapped angrily.

God told Cain that as punishment for murdering Abel, Cain would not only be banished from being able to grow crops, he also would be banished from God’s presence and wander the earth for the rest of his life.

Cain feared he would be killed on sight, so God put a mark on him so he would not be killed.

After a time, Adam and Eve had more children.

“God has granted me more offspring in place of Abel,” Eve said, “because Cain slew him.”

1. What were the names of Adam and Eve’s first two sons?

Ever since the fall of Adam and Eve, God has been trying to get people to change their wicked ways and not give in to sin.

He warned Cain that his anger toward his brother, Abel, was sinful and not to give in to it. But Cain did not listen and instead committed the first murder by killing his brother.

In Genesis 6, we read that God saw “how great the wickedness of human beings was on earth.”

God was very sorry that he had made human beings. So he decided to send a great flood to destroy everyone on earth except a righteous man named Noah, along with Noah’s family and two of every creature on earth.

After God destroyed all the wicked people on earth and the floodwaters receded, he said, “Never again will I curse the ground because of human beings, since the desires of the human heart are evil from youth.”

Even though God knows people tend to sin, he still loves us and wants to give us the chance to be forgiven and change our ways. He even sent us his son, Jesus, to die for our sins.

As we read in John 3:16, “For God so loved the world that he gave his only Son, so that everyone who believes in him might not perish but might have eternal life.”

St. Boniface of Lausanne was born in Belgium. He studied in Paris and was well-known for his university lectures.

He eventually taught at the cathedral school in Cologne, Germany, and it was there that he was appointed bishop of Lausanne, Switzerland.

As bishop, he was attacked for pointing out the corruption of the clergy and emperor, so he asked the pope to release him from being a bishop. Afterward, he lived the rest of his days at a Cistercian nunnery in Brussels, Belgium.