Caledonia parish is close with its neighbors - Catholic Courier 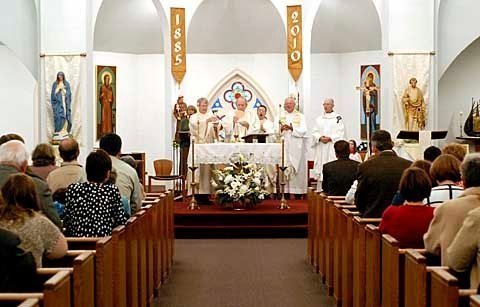 If there’s one theme in the history of Caledonia’s St. Columba/St. Patrick Parish, it’s that it has close ties with other parishes in the area.

Case in point: the anniversary and dinner marking the 125th anniversary of St. Columba Church on Nov. 14.

That party was billed as the last solo event before the parish clusters next year with St. Mary of the Assumption in Scottsville and St. Vincent de Paul in Churchville. Those parishes, along with St. Christopher in North Chili, make up the Five Saints West Pastoral Planning Group.

Even though the clustering has not yet happened, parishioners from the cluster-to-be sang in the choir for the anniversary Mass, helped set up decorations prior to the Red Osier-catered dinner and even stayed to help clean up afterwards.

"They are showing solidarity with us," he noted.

The parishes also are working to open Patrick Place, a new comfort-care home in the rectory of St. Mary of the Assumption.

Patrick Place is named in honor of the former St. Patrick Parish of Mumford, which merged with St. Columba in the late 1980s. Since then, the Caledonia-based parish has been known as St. Columba/St. Patrick Parish, and the Mumford church became a clothing closet. It was sold earlier this year to an individual who planned to use it as a home.

The ties among St. Mary of the Assumption, St. Columba and St. Patrick date back to the earliest days of St. Columba, according to the parish’s 125th anniversary book (1885-2010). Mass was first said in the area in 1841 on an infrequent basis in the homes of Catholics in the Scottsville-Mumford-Caledonia District.

Twenty-eight-year-old Father George J. Eisler was appointed to the pastorate at Scottsville in 1881, and in 1885 he took up a subscription to build a Caledonia church for about 65 Catholic families in the town. The cornerstone was laid June 19, 1885, and the first Mass in the church was celebrated on Thanksgiving Day, Nov. 26, 1885.

The Irish immigrants who populated the Caledonia parish chose a name of St. Columbkill. The name honored an Irish saint who atoned for a bloody victory by going in exile to Scotland with the mission of winning as many souls for Christ as were lost in the battle. The parish’s name was changed to the Latin version — St. Columba — around 1913.

St. Columbkill mission church was elevated to a parish in 1889, with Father Eisler as its pastor and St. Patrick in Mumford as its mission.

One parishioner who exemplifies the close ties between St. Patrick and St. Columba is Maureen Reeves of Caledonia. Her great-grandparents helped to build St. Patrick Church, and she owns a drop-leaf table that was used as the church’s first altar.

Yet her family also has a long history with St. Columba.

"My grandparents were the second couple to be married in St. Columba, and we’ve always gone there," Reeves said.

Father Eisler, who married Reeves’ grandparents, served as pastor until 1923, with the exception of a span of time from 1901 to 1903. His long pastorate was mirrored by that of Father William J. Devereaux, who served as pastor from 1944 to 1970. Father Devereaux’s tenure was highlighted by a long-term rehabilitation project of parish property.

"He wasn’t anybody’s buddy, but you always knew that you could depend on him," Brunette recalled.

Father Devereaux retired as pastor in 1970 but remained on as assistant pastor as Father Emmett Halloran came to the parish from King’s Preparatory School. Father Halloran led a major redesign and renovation of the sanctuary in 1973 that added an altar by furniture artist Wendell Castle, and a tabernacle and grill designed by Rochester sculptor Carl Zollo.

In 1981, Father Ronald Gaesser became pastor. He helped start a chapter of the Knights of Columbus in 1982, and he and School Sister of Notre Dame Carol Datz established several successful adult faith-formation programs. Around this time, the church celebrated its 100th anniversary with a Latin Mass and a parade. During Father Gaesser’s time, the parish experienced significant growth.

"At one point in this parish, the fire marshals came to a parish council meeting and told the parish council they had two choices: add another Mass or build a bigger church," said Brunette, who also added that the parish opted to expand its parking lot in 1986 to address concerns.

Father McGrath became pastor in 2005 and has guided the parish in several renovation projects, including updating the rectory. Additionally, the parish has added social and spiritual gatherings, including parish picnics, a vacation Bible school, monthly holy hours, men’s and women’s prayer breakfasts, a Bible study, and Cursillo retreats.

"Father Mickey is a joy — a breath of young air," Reeves said.

During the past year, the parish has celebrated its anniversary with several events, including a golf tournament, a wine and cheese tasting, and a baked-goods sale. The parish also is selling Christmas ornaments of the parish.

The Nov. 14 anniversary Mass was celebrated by Bishop Matthew H. Clark, and the dinner featured Rochester Philharmonic Orchestra harpist Grace Wong. Parishioner Tim Anderson, whose great-grandfather was a trustee of the church in 1885, served as the master of ceremonies.

The anniversary celebration coincided with a capital campaign to raise $210,000 to repair the church roof, boiler chimney and stucco. The Catholic Ministries Appeal campaign also was combined with the capital campaign.

"We were finally able this year to go into the black," said Father McGrath, who noted parishioners have embraced stewardship of time, talent and treasure. "People have stepped up and done that. We’ve tried to grow our ministries."

The priest said that like many other parishes in the area, St. Columba/St. Patrick has struggled with an attendance decline, but he said the parish has grown during his tenure. The parish also is in the planning stages for a mission trip to New Orleans with other churches from the Caledonia-Mumford Council of Churches.

"I think the future of all of our parishes really needs to be a move towards more mission orientation: moving outwards and hopefully bringing people in through evangelizing," Father McGrath said.