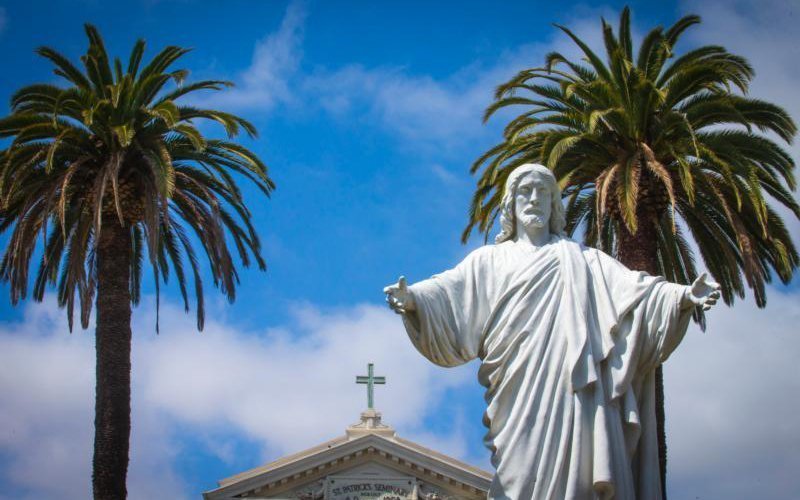 A statue of Jesus greets visitors at St. Patrick's Seminary and University in Menlo Park, Calif., May 9, 2019.

SACRAMENTO, Calif. (CNS) — When Catholic clergy, penitents, theologians and canon lawyers look at the wording in a California state bill that would compel a priest to reveal what’s heard during confession if there is a suspicion of child sexual abuse, they see an infringement on religious freedom.

But the man who introduced S.B. 360 — California Democratic Sen. Jerry Hill of San Mateo — sees it as eliminating a loophole in the law that would ultimately help protect children from sexual predators.

As it is in many U.S. states, California requires priests, teachers, social workers, doctors and other professionals to be “mandated reporters.” That means by law they are required to report any case of suspected abuse to authorities.

There is currently an exemption in California law for any clergy member “who acquires knowledge or a reasonable suspicion of child abuse or neglect during a penitential communication.”

For Catholics, that penitential communication would be in the confessional.

The bill is expected to have a vote in the lower house, the California State Assembly, in September.

In a May interview with Catholic News Service, Hill said he understood the confidentiality between priest and penitent in the confessional is a vital component of the sacrament of penance and that under Catholic church law, clergy who knowingly violate the seal of confession are subject to immediate excommunication.

“I look at this as the greater good of society,” he said. “When you take the issue of child abuse and neglect and you look at every civilized country in this world, every one of them looks at this as a complete violation of anything that is good and right in this society.”

There are limits to all freedoms, Hill said, and pointed out that California has even eliminated spousal privilege when it comes to matters of child abuse and neglect.

In supporting S.B. 360, he points to the case of a priest in Queensland, Australia — Father Michael McArdle — who said in a 2003 affidavit that during the course of a quarter century he confessed more than 1,000 times to 30 different priests that he molested children.

In the affidavit, Father McArdle — who served six years in prison after pleading guilty to 62 counts of the official charge of “indecent dealing” — said he felt remorse after each sexual act with minors and attended weekly confession, where he received absolution each time and was only given prayer as penance.

“Members of the clergy have identified their role in some abuse to another member of the clergy in that confessional or in that penitential communication, and in so doing they have felt that they have been absolved of some of their sins and turned around and gone ahead and done the same thing over again,” said Hill, who was raised Lutheran and whose wife is Catholic.

Theologians have argued that the Australian priest’s account in the affidavit can’t be corroborated since the members of the clergy he claims to have confessed to are bound to confidentiality under the seal of confession.

Others argue that it would be rare for pedophiles to confess the sin of child sexual abuse in the confessional.

It’s not in the psychological makeup of most child sex abusers to confess that kind of sin, said Msgr. Stephen J. Rossetti, a psychologist and expert on the spiritual and psychological health of priests, who is a theology professor at The Catholic University of America in Washington.

At least one priest believes Pope Francis should change church law to modify the seal of confession to allow members of the clergy to report all information regarding sexual abuse of a minor or a vulnerable adult discovered in the confessional to civil and church authorities.

Father James E. Connell of the Archdiocese of Milwaukee, a canon lawyer, an advocate for victims/survivors of sexual abuse, and a member of Catholic Whistleblowers, argued in a Nov. 5, 2018, op-ed piece in the National Catholic Reporter, that the time for change in the seal of confession is now.

“The church has been shaken to its core and that core needs corrective action,” he said in the op-ed. “And my suggested change in the seal of confession law would provide an important alteration to that core — publicly disclosing sexual abusers and holding them accountable, while also protecting innocent people.”

Other canon lawyers and theologians have argued that any breach the seal of confession will only erode the trust penitents have with their priests and diminish the sacrament.

In other words, if penitents believe a priest might divulge their sins to authorities, they will either not confess or confess without specificity, said Auxiliary Bishop Peter L. Smith of Portland, Oregon, who also is a canon lawyer.

That would leave priests with no ability to try to convince penitents who have confessed to criminal behavior to “do the right thing and turn themselves into civil authorities,” Bishop Smith told CNS in a May interview.

Msgr. Rossetti suggested that measures, such as S.B. 360, are red herrings and won’t yield credible information regarding child sex abuse.

He suggested that pursuing other laws, such as extending the statute of limitations for criminal prosecutions of accused child sexual abusers, would better ensure the safety of children.