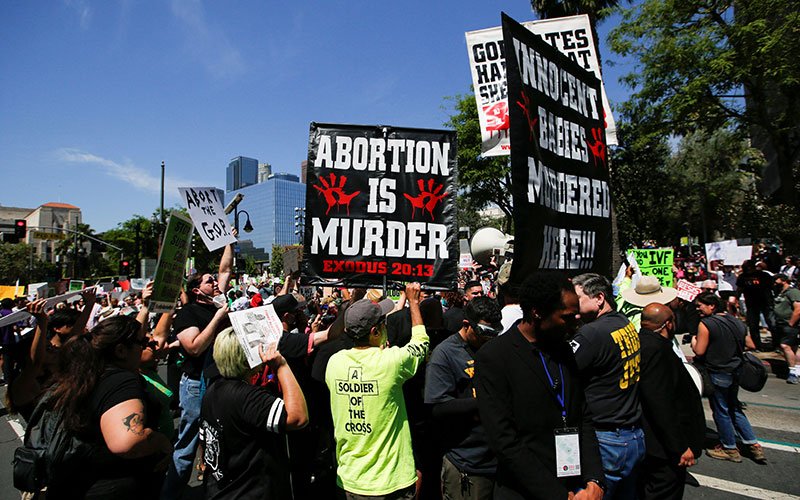 Abortion demonstrators are seen in Los Angeles May 14, 2022. The California Senate June 9 introduced a constitutional amendment to protect "abortion rights," a measure the state's Catholic bishops said "looks to enshrine the most extreme forms of abortion" in the state constitution. (CNS photo by Aude Guerrucci/Reuters)

“We believe in protecting life at every age in every stage,” the conference said in a June 9 statement, adding that the language in Senate Constitutional Amendment 10 introduced a day earlier, “is so broad and unrestrictive that it would encourage and protect even late-term abortions, which most Californians oppose.”

“We also fear the boundless scope of this proposed amendment, which asserts a new constitutional right to ‘reproductive freedom’ but does not define what that means,” said the conference, which is the public policy arm of the state’s Catholic bishops.

As written, the amendment — which will be on the November ballot — “will legalize and protect abortion up to the point just prior to delivery,” according to the conference.

“It is distressing that so many California legislators would sign their names to legislation that allows the taking of a human life moments before birth,” it added. “In this regard, SCA 10 would more closely align California with the extreme abortion policies of only a few countries rather than those of the majority of Western democracies, which do not allow late-term abortions.”

The Catholic conference said it is a “sad reality” that California “already has some of the most accommodating abortion laws and services in the nation.”

“And by providing extensive funding for abortion services without any corresponding equitable funding for pregnant women and mothers, the state exercises a destructive, coercive power in favor of ending innocent lives,” it stated. “Enshrining this amendment’s language into the constitution will extend the danger of coercive abortion to babies with unquestioned viability.”

In recent months, several states have passed abortion legislation in anticipation of the Supreme Court’s upcoming decision in Dobbs v. Jackson Women’s Health Organization, which is expected to overturn Roe v. Wade, the 1973 ruling that legalized abortion nationwide. If Roe is overturned, the issue of legal abortion will return to the states.

State measures vary from liberalizing state laws on abortion to enacting restrictions or banning most abortions.

In California, Gov. Gavin Newsom and the state’s “pro-abortion” legislative supermajority have vowed to turn the state into an “abortion sanctuary” for the nation if Roe is overturned.

Newsom said he wants to expand the state’s abortion aid to cover uninsured low- and middle-income women and also is looking for California to spend an extra $57 million to prepare for an expected influx of patients from states “hostile to abortion.”

In a June 8 statement on the proposed amendment, Newsom said it will “ensure that women in our state have an inviolable right to a safe and legal abortion that is protected in our constitution.”

“California will not sit on the sidelines as unprecedented attacks on the fundamental right to choose endanger women across the country,” he said.

To amend the state constitution, two-thirds of the membership of each chamber of the Legislature must propose an amendment, which then goes on a statewide ballot to be ratified or rejected by the state’s voters. Ratified amendments take effect the day after the election.

The California Catholic Conference said it will be “actively engaged in opposing the upcoming ballot initiative and asking the state’s 12 million Catholics to work to raise awareness and vigorous opposition in our dioceses, parishes and communities.”