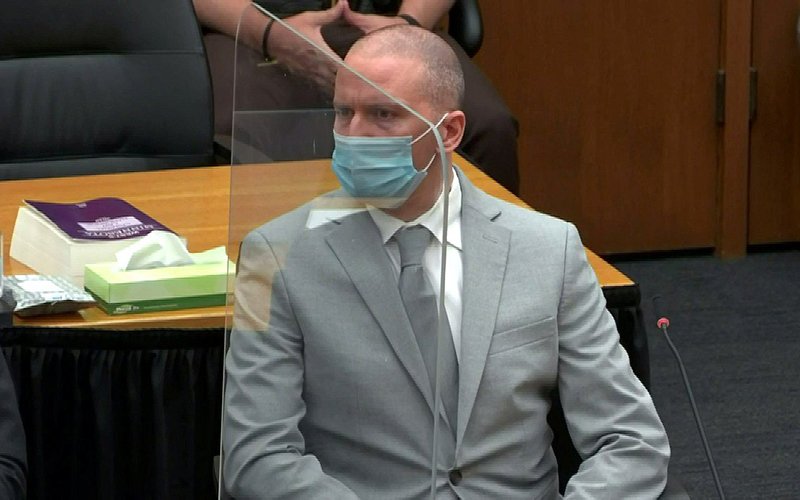 Former Minneapolis police officer Derek Chauvin listens to his mother, Carolyn Pawlenty, deliver a statement to the judge June 25, 2021, as he awaited his sentence for murder in the death of Floyd in Minneapolis. Chauvin was sentenced to 22 and a half years in prison. (CNS photo Pool via Reuters)

ST. PAUL, Minn. (CNS) — Following Derek Chauvin’s June 25 sentencing for the murder of George Floyd, Archbishop Bernard A. Hebda of St. Paul and Minneapolis prayed it would “bring a measure of peace and healing” to Floyd’s family, his friends “and our community.”

At the same time, he said in statement, he also prayed this will prompt everyone “to go deeper in our conversations about race, justice, violence and peace.”

“Please join me in praying that the Lord will guide us in those conversations, no matter how difficult and uncomfortable they may be, while bringing consolation to the Floyd family, healing to our community and protection to all who work for peace,” Archbishop Hebda said.

A former Minneapolis police officer, Chauvin was given 22 and a half years in prison for killing Floyd. His death while in police custody one year ago rocked the Twin Cities and the nation with protests, riots and a searing national debate over racism and justice that continues to this day.

Chauvin, 45, who is white, was convicted April 20 of second-degree unintentional murder, third-degree murder and second-degree manslaughter in the May 25, 2020, death of Floyd, an African American, after Floyd was accused by a store clerk of trying to pass a counterfeit $20 bill.

Given the opportunity to address the court before he was sentenced, Chauvin said he was constrained from giving a full statement because of still-pending legal issues.

“I do want to give my condolences to the Floyd family,” he said. There might be information released in the future that could help give the family some of peace of mind, he said.

Chauvin was accused of kneeling on 46-year-old Floyd’s neck for about nine minutes on a city street as Floyd protested that he couldn’t breathe and lost consciousness. Floyd had resisted being taken into a squad car.

As he lay handcuffed, face down on the pavement, a crowd of people gathered, some of them urging Chauvin and three other police officers to let Floyd up. One bystander captured part of the scene on a cellphone video that went viral and sparked protests in the Twin Cities and around the country.

Hennepin County District Judge Peter Cahill sentenced Chauvin on the second-degree murder count, which in Minnesota carries a maximum term of 40 years in prison. As lesser offenses, the other two counts were not adjudicated.

State sentencing guidelines for second-degree murder call for between 10 and a half years and 15 years in prison for someone, like Chauvin, with no criminal history.

But the Minnesota Attorney General’s Office, which led the prosecution, asked for 30 years in prison, noting aggravating factors Cahill had accepted prior to sentencing: As a police officer, Chauvin “abused a position of trust and authority,” he treated Floyd with “particular cruelty,” children were present when Floyd was pinned to the pavement and he committed the crime with three fellow officers.

In declaring the sentence, which included credit for 199 days served by Chauvin, Cahill noted abuse of authority and cruelty toward Floyd. He said his sentence was based on applying the law to the facts of the case.

Cahill acknowledged the deep pain felt by the Floyd family, and the pain experienced in Hennepin County, in Minnesota and across the country. But the sentence was not based on emotion or public opinion, he said. To emphasize his point, Cahill said a 22-page memorandum explaining his reasoning would be attached to the sentencing order. He encouraged people to read it.

Chauvin’s attorney, Eric Nelson, had argued for probation and time served, or at least less time than recommended by state guidelines. He argued Chauvin had no criminal history and a supportive family and ex-wife. Chauvin also would face violence in prison, Nelson argued.

The three other, former officers await trial on charges of aiding and abetting second-degree murder and second-degree manslaughter. All four also face federal charges in the case.

In the wake of Floyd’s death, people in the Twin Cities and across the country continue to absorb the events that led to Chauvin’s arrest, conviction and sentencing. Catholic parishes and schools in the archdiocese have responded with prayers, workshops and study groups on racism. Leaders in the church participated in prayer vigils and rallies and provided materials on church teaching on racism and social justice.

Shortly before the jury announced in April that it had found Chauvin guilty on all counts, the bishops of Minnesota, including Archbishop Hebda, issued a statement urging people to turn to Jesus to find peace, forgiveness, compassion and justice.

The bishops also pledged the church’s commitment “to providing long-term leadership in eradicating the structures of racism and sin in Minnesota and beyond.”