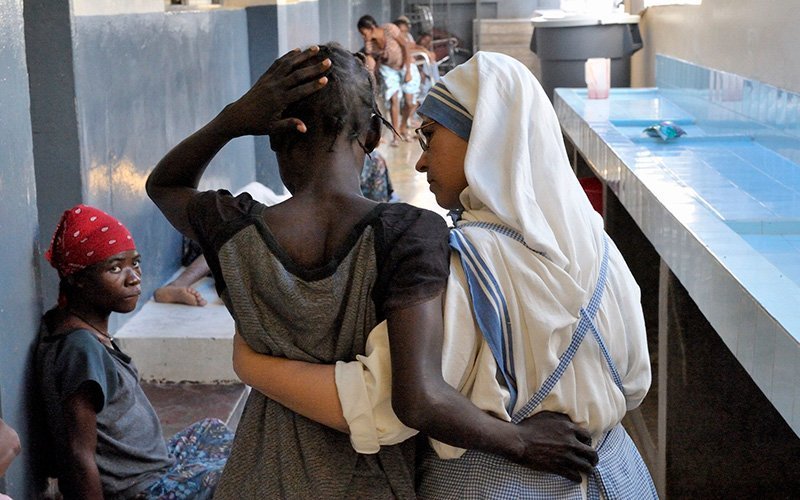 At the "House for the Dying," a hospice run by the Missionaries of Charity in Port-au-Prince, Haiti, Sister Paula is pictured in a 2009 file photo supporting a patient. (CNS photo by Paul Jeffrey)

Called to the priesthood: My surprise Los Angeles story

“God wants to fulfill the desires of your heart.” This was the message that stayed with me after attending a retreat when I was a teenager and continued to resonate in my soul as I discerned my vocation.

Looking back, I realize that throughout my discernment the Lord continued to reveal to me the true desires of my heart.

I was blessed to grow up in a loving family and witness a beautiful marriage. Seeing my parents’ love for each other and for the Lord naturally caused me to dream about my future husband and family. In fact, I did not realize there could be another option for my life until I was a teenager.

Much to my surprise, when I was in eighth grade my older brother announced to the family that God was calling him to be a priest. I was stunned.

At that point the only priests I knew were well into their 60s, so I did not realize that men still joined the priesthood. I imagined that there must be something wrong with my brother.

A couple of years later when I witnessed his first profession of vows and especially the prostration before the altar, I knew in the depths of my heart that my brother was responding to an invitation to lay down his life.

I also knew by his manifest joy that only love causes one to offer such a gift. This stirred in my heart a deep desire to do something radical for God.

This desire continued to resonate in my heart as the Lord drew me to himself through the sacraments, eucharistic adoration, catechesis and good friendships. My priorities began to shift, and my focus was changed.

Decisions that I had once measured by the question, “What do I want?” I now began to assess in prayer: “Lord, what do youwant?”

My first encounter with religious life was during my junior year of high school. My dad told me about a retreat that was happening at the motherhouse of the Dominican Sisters of St. Cecilia in Nashville, Tennessee.

At first I was intimidated by the idea of spending time at a convent. But I decided to call the vocation director to inquire about the retreat. The sister’s pleasant voice and warm personality gave me the courage to sign up.

The retreat experience was a tremendous grace. I found the sisters to be full of joy and life. I was impressed that each sister was herself, with her own personality and gifts, and that each sister possessed an unmistakable freedom. By the end of the retreat I wanted to be a religious sister.

However, this desire faded, or seemed to, when I got back to school and the dream to be a wife and mother remained. When it came time in my senior year to declare what I was going to do the following year, I decided to go to college and put the discernment question on the back burner.

I attended a small, Catholic liberal arts college where I could learn more about the faith and develop my relationship with Christ both in classes and through college life.

It was wonderful to be surrounded by the faith, and in fact I was surprised during my sophomore year when I started to feel very restless.

I was not sure what the source of this restlessness could be, but I knew I needed a change. I decided to transfer to a different school, but that summer the thought of religious life continued to surface.

In growing closer to Christ throughout college, I had begun to learn more deeply how to hear his voice, and I could not deny that he was inviting me to consider religious life again.

In visiting St. Cecilia again that summer I received the grace to understand my desires more fully. In wanting to be married, I was really longing to be dedicated to one other. Christ was inviting me to dedicate myself to himself alone.

This realization gave me so much joy that it became a source of peace. I entered St. Cecilia as a postulant that summer. Now, after 14 years as a Dominican sister I cannot imagine my life any other way.

In his will — in allowing his desires to be our own — is our peace!

(Sister Mara Grace Gore is a member of the Dominican Sisters of St. Cecilia. She currently serves as the vocation director, and is based in Nashville, Tennessee.)