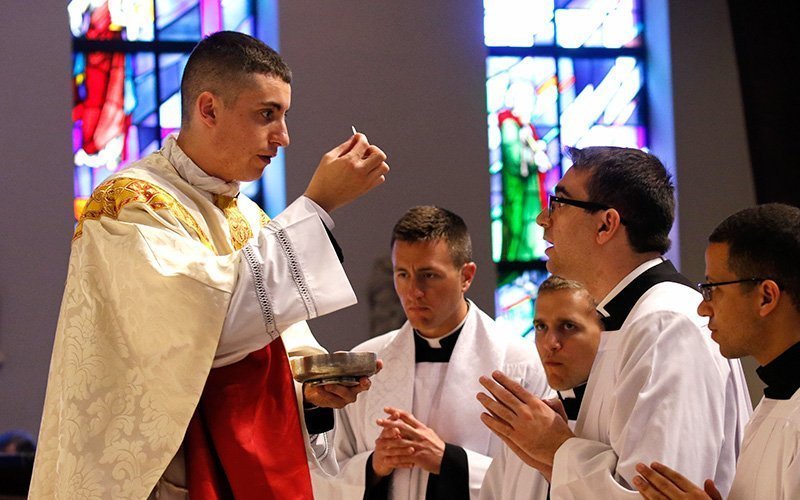 I arrived in Los Angeles on Oct. 4, 2007, the feast of St. Francis (my confirmation patron, a detail that escaped me at the time). I was tired and full of anticipation after my five-day drive across the country in my Chevy Cavalier, packed to the brim with everything I needed to start this new chapter in my life.

I had loved acting since sixth grade and spent countless hours in the theater. But until my late 20s, I hadn’t dreamed of moving to LA, so far from my childhood home of Pittsburgh.

In 2007, though, I had just completed a master’s program for acting, and for the first time in my life, I had a strong sense that God was calling me to pursue my dreams on a grander scale. So I took the leap and began the nearly 11-year chapter of my life in LA.

I never could have guessed that at the end of those 11 years I would be driving back east — this time to enter the priestly formation program for the Diocese of Pittsburgh.

I was raised Catholic and I had taken faith seriously throughout my adult life. In fact, I saw acting as part of that, as a way I could minister to others through the art of telling stories on stage and screen.

While in LA, I auditioned for whatever I could. I joined Actors Co-op, a Christian theater company that nourished my creativity and spirituality. I performed in numerous plays and smaller film projects, and I had two bigger breaks — one as a salesman in a Honda commercial and another as a museum tour guide on the TV show “Sleepy Hollow.”

Like many actors, I took other jobs too — first as a Starbucks barista, then as an adjunct theater professor at a nearby university.

I didn’t get too connected with the LA Catholic community at first. For several years, I attended a nondenominational Christian church and took part in small prayer groups. These connections helped to keep me grounded in faith and growing in my relationship with the Lord.

Another thing that helped during that time was adversity — long dry spells between auditions and the increasing awareness that if I was to have a chance of persevering, my identity had to be rooted in something deeper than where or whenever my next opportunity would come.

So throughout my years in LA, my spiritual life deepened and whether I was going on auditions or not, I did pray.

This prayer came well into my time in LA, and it wasn’t born of desperation. I was enjoying my work as a professor, and I had gotten somewhat used to the slow progress that is the reality of most actors’ careers. But I also sensed that something was missing.

Around this same time, I was gradually being drawn back to my Catholic roots. While visiting family in Pennsylvania, I attended Mass and was reminded of the beauty of Catholic liturgy. Then, back in LA, a friend invited me to a Catholic parish, St. Dominic’s.

My first Sunday there, I felt like I was coming home. The Mass, the preaching of the Dominican priests there and the warmth of the parishioners stirred my heart and kept me coming back for more.

At St. Dominic’s, I came to a new understanding of the sacraments, especially the Eucharist and confession, and I got involved in the community — way faster than I expected. I helped lead a young adult ministry and a film discussion group, I started lectoring and I spent time in eucharistic adoration.

As I interacted with my priests, a thought appeared in my mind, something completely new: Could I be built to do what they’re doing?

This thought surprised and scared me at first. Now in my late 30s and considering a major life change, I was either crazy … or this was God’s answer to my prayer. It took some time to sort through, but with a lot more prayer, research and guidance from some wonderful priests and mentors, the message became impossible to ignore.

In 2007, I felt God was calling me to LA. Since discerning priesthood, I have experienced a deeper call, a flame from within that has brought new focus to my years in LA and beyond. I had my dream, and it was grand enough — but it couldn’t compare to God’s vision for my life.

I’m now in my third year of seminary, and I’ve received many more graces along the way. It hasn’t been without its challenges, but what once seemed crazy to me looks increasingly like the adventure God intended from the start.

(Daniel J. Roberts, a seminarian for the Diocese of Pittsburgh, is currently studying at Theological College and The Catholic University of America in Washington.)