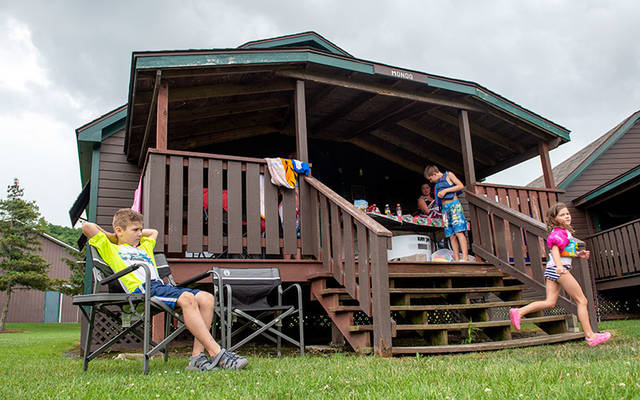 Mitchell Walluk (from left) Sharon Hodge, Brayden Hodge and Claire Hodge share a cabin at Camp Stella Maris with other members of their family July 23. (Courier photo by Jeff Witherow)

John Quinlivan will never forget the day he decided to cancel the 2020 summer-camp season at Camp Stella Maris.

“It’s the hardest business decision I’ve ever had to make in my life, but I still stand by it,” said Quinlivan, executive director of Camp Stella Maris, an affiliate agency of Catholic Charities of the Diocese of Rochester.

Quinlivan and his fellow members of the American Camp Association had been waiting since March for guidance on how to safely operate an overnight summer camp during a global pandemic. There was a wealth of information in the nearly 100-page document, but it didn’t reassure Quinlivan.

“As I read through them I thought, ‘These are all great, but I still can’t say to our parents that your children are safe.’ To us it’s 100 percent about making sure our campers are safe, and our staff. To me, it didn’t feel like a matter of if someone at camp would get coronavirus, it was when,” Quinlivan recalled, noting that in mid-June, the New York State Health Department announced overnight camps would not be allowed to operate anyway.

After making his decision, Quinlivan and his staff immediately took up the daunting task of calling the families of the 1,500 campers who were already signed up for the summer program. Many of these families had been holding out hope that summer camps might be able to provide a sliver of normalcy in an upside-down world, and news of the program’s cancellation was devastating for these families as well as the camp’s staff. The staff didn’t dwell on the negative, however, and soon set about turning lemons into lemonade.

Quinlivan decided against developing some sort of virtual camp program, as many organizations were already occupying that space and doing it well, he said. Instead, he opted to turn the camp, located on the shores of Conesus Lake, into a campground for families. Interested families could rent out individual cabins for $125 per night, with a two-night minimum. They would be responsible for bringing and cooking their own food, although the camp did provide assigned space in its walk-in cooler and as much free ice as families could use. Families also would have access to the camp’s swimming area as well as its kayaks, canoes, inner tubes and some sports equipment, and for an additional fee they could participate in archery lessons or use the camp’s high-ropes course.

The camp’s staff began publicizing this new opportunity in early June, and families soon started booking stays at the camp for as early as late June. Most families booked stays of two or three nights, while others stayed at the camp for a whole week, Quinlivan said.

“During the week we’re a half to two-thirds full. Full is 23 families. On the weekends we’re packed full,” he said. “I knew it was going to be a good program, but I didn’t expect that people would embrace it as well as they have.”

The families who arrive at camp seem to fall into one of three groups, Quinlivan added. One-third of the families are people who heard about the camp from friends, and another third are families whose kids either were signed up for the 2020 summer camp program or attended in recent years.

“Now Mom and Dad get to bring them to camp. Kids get to show their parents what they do here. That’s really cool,” he said.

The other group, he said, is former teen or young-adult staff members who now have their own kids.

The le Roux Ohm family is one such family. Linky le Roux Ohm attended the camp as a child and later worked there as a counselor and a program director. She and her husband, Matthew, brought their children, 8-year-old Lena and 4-year-old Edie, to Camp Stella Maris for an early July stay. Not only did the whole family enjoy playing in the water and going for boat rides on Conesus Lake, but she also got to show Lena and Edie her name in an area of the boathouse filled with the signatures of counselors from years past.

“Being able to experience (the camp) together as a family was a real gift. It’s something we’ll always treasure,” le Roux Ohm said.

Although the cabins are often full, the income from these rentals is a drop in the bucket compared to the revenue that had been expected from the summer-camp program, Quinlivan said.

“It’s like having one-tenth of your campers there,” he said, noting that the rental income has saved him from having to lay off his handful of full-time staff members, but he expects the camp to have a significant deficit at the end of the year.

Nonetheless, he and his staff members, who are working 60-hour weeks without complaint, are happy to be able to provide families with a safe way to take a vacation this year.

“The worries of the outside world don’t reach you here. It’s like an escape from reality,” noted Morgan Reese, who stayed at Camp Stella Maris in early July with her parents and three siblings.

Such an escape was desperately needed, as her father, Jeff Reese, was hospitalized with COVID-19 in April and early May and spent 25 days on a ventilator before making a full recovery.

“All these things people are going through are pretty crazy,” Jeff Reese remarked. “The world is in the state that we’re in, so how is it you can go drive 30 minute south (of Rochester) and be at an oasis like Camp Stella Maris?”

“This is absolutely what people need,” Quinlivan agreed.