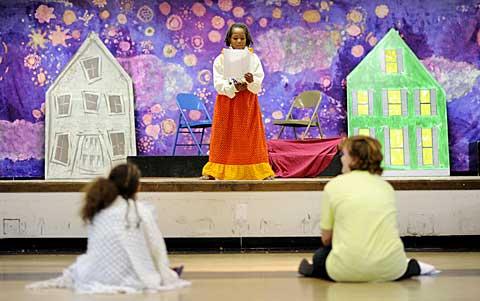 ROCHESTER — After finishing a long practice July 30, 10-year-old Ebony Williams collapsed — not from exhaustion or frustration, but from excitement.

"I can’t wait to show everyone what we’ve been doing," she said. "We’ve been working so hard for this!"

For two weeks this summer, Ebony and 27 other youths had been preparing for a special event, giving 100 percent of their commitment and enthusiasm each day. By 3 p.m., the youths left tired yet excited for what the next day would bring.

This consistent practicing was for a performance of "Oliver Twist," the culmination of a two-week theater program at Light of Christ Parish, which comprises St. Andrew Church and Church of the Annunciation.

The camp was a first for the parish, and the idea for it originated with Father Michael Mayer, who is now on sabbatical after pastoring Light of Christ. Father Mayer has been studying worship/liturgy theater in such European locations as London, York, Vienna and Munich.

The priest’s passion for Christian theater prompted him to apply for a grant for his sabbatical from Lilly Endowment, a philanthropic foundation. A caveat of the grant was to implement a parallel program at Light of Christ, which is how the idea for the theater camp came into being.

"Theater is a wonderful way to help children express themselves, to use their imaginations and to find different ways to communicate with others," Father Mayer said in an e-mail to the Catholic Courier.

Children are able to genuinely comprehend the Gospels and other stories when they act them out, Father Mayer noted. He believes "that children are very creative and imaginative and, unlike adults, can enter more easily into this creative process."

Each weekday from July 19-30, parish youths and neighborhood children ages 4 to 13 gathered to learn about both acting and Christianity.

The camp was led by four alumni of or current students from the Franciscan University of Steubenville in Ohio: Michelle Kafel, ’04; Rocco Ambrosio, ’09; Kristin O’Malley, ’10; and Sarah Dirkes, ’11.

The program is very important for youths, Kafel said July 30, noting that "it’s a way for them to use expression to tell stories to the community."

"This camp provides (the youths) with a set schedule and something to do. They learn discipline and how to express themselves," she said.

From 9 a.m. to 3 p.m. every day, youths gathered in the basement of the former St. Andrew School to learn acting techniques, sing songs, play games and practice theatrical warmups. Afternoons were reserved for rehearsing the play.

Eleven-year-old Kimani Blocker, who performed the role of the narrator, said she loved participating in the theater camp.

"My favorite part has been learning to be dramatic," she said.

During the camp’s final rehearsal July 30, youths were clearly looking forward to performing. Smiles, laughter and chatter seemed to be contagious as the campers animatedly delivered their lines. Despite a few missed cues and forgotten lines, the youths finished the rehearsal optimistic about performing the play that evening.

O’Malley said that about 50 family members and friends watched the final performance, calling the night a success.

"The children were all very enthusiastic about their time to shine, and they were so proud of themselves," said O’Malley, noting that the youths received a well-deserved round of applause at the conclusion of the performance. "Everyone was happy."