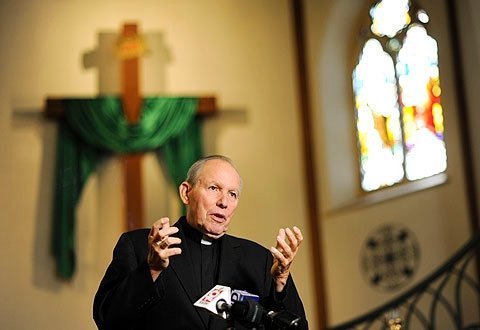 Bishop Matthew H. Clark addresses members of the local media during a Sept. 12 press conference at Holy Cross Church in Charlotte that marked the beginning of this years Catholic Ministries Appeal.

CHARLOTTE — A goal of $5.7 million has been set for the 2011-12 Catholic Ministries Appeal, Bishop Matthew H. Clark announced during a Sept. 12 news conference at Holy Cross Church.

This year’s CMA theme is "The Power of Many … Stronger As One." The appeal will run through May 31, 2012. Envelopes will soon be mailed to parishioners, with parishes throughout the diocese launching the campaign in upcoming weeks.

Diocesan officials are hoping to surpass last year’s final collected total of $5.2 million — a record amount and the fourth straight year of topping the $5 million mark. It also marked the sixth consecutive year that the average gift increased; last year the average was $161.

CMA supports more than 314,000 Catholics throughout the 12-county Diocese of Rochester. Appeal funds make up approximately half of the diocesan budget and are vital to maintaining many diocesanwide programs, services and ministries. Without this funding, "we can’t provide the services people would really like to have," Bishop Clark said.

David Kelly, diocesan CMA coordinator, stressed that a number of these offerings, though vital to Catholics at the parish level, don’t actually come out of parish budgets.

"So many of these programs are accomplished (through CMA) that couldn’t be done by parishes on their own," Kelly said.

Kelly added that "The Power of Many … Stronger As One" emerged as this year’s theme to punch home the fact that individual Catholics, parish communities and diocesan operations are all components of a single body of faith.

"What we want people to realize is that their gifts, when pooled together, create things that just couldn’t happen otherwise," Kelly said.

Among the many areas positively influenced by CMA funding are children’s and adult faith formation; sacramental preparation; youth ministry and Catholic Youth Organization activities; Catholic Charities and its 10 regional offices; Catholic schools; campus and young-adult ministry; hospital chaplaincy and inmate programs; outreach to migrant farm workers and their families; promotion of priestly vocations; Pope Benedict XVI’s ministries and those of the U.S. Conference of Catholic Bishops; parish support ministries; technological support and expansion; promotion of the consistent-life ethic; interreligious and ecumenical collaboration and dialogue; marriage preparation; formation for people who wish to become Catholic; and Pastoral Center operations and services.

Bishop Clark acknowledged that despite the CMA’s record total from 2010-11, the campaign still fell short of its goal of $5.6 million. Even so, the bishop expressed admiration for donors’ continued commitment to the CMA "in light of the fact that so many people have severe economic challenges in their lives these days." He added that any gift, large or small, is vital to the campaign’s success, and encouraged people who have not supported the campaign in some time — or have never given — to consider making a gift for 2011-12.

Bishop Clark instituted the Catholic Ministries Appeal in the early 1980s when it was known as the Thanks Giving Appeal. He observed that some funding needs have changed over the years, such as the dramatic increase of electronic communication that didn’t even exist in the campaign’s infancy.

"Now we have a large intranet so that every parish and every school are wired together," he said.

But by and large, Bishop Clark said the basic intent of the CMA remains the same — "always around the core ways we live the Gospel," he emphasized. He cited as an example the diocese’s ongoing emphasis on lifelong learning of the Catholic faith.

"We’re always interested in faith formation, encouraging parents and other people to take advantage of religious education not just as children but all through their lives," he said.

EDITOR’S NOTE: Catholic Ministries Appeal gifts may be made by mail, with parish-provided envelopes or online. Checks, credit cards, electronic-fund transfers and appreciated securities are all accepted. Pledges are tax deductible. The 2011-12 campaign video and brochure may be viewed online at www.dor.org/index.cfm/stewardship/annual-appeal/. For further details, contact Dave Kelly, diocesan CMA coordinator, at 585-328-3210 or dkelly@dor.org.