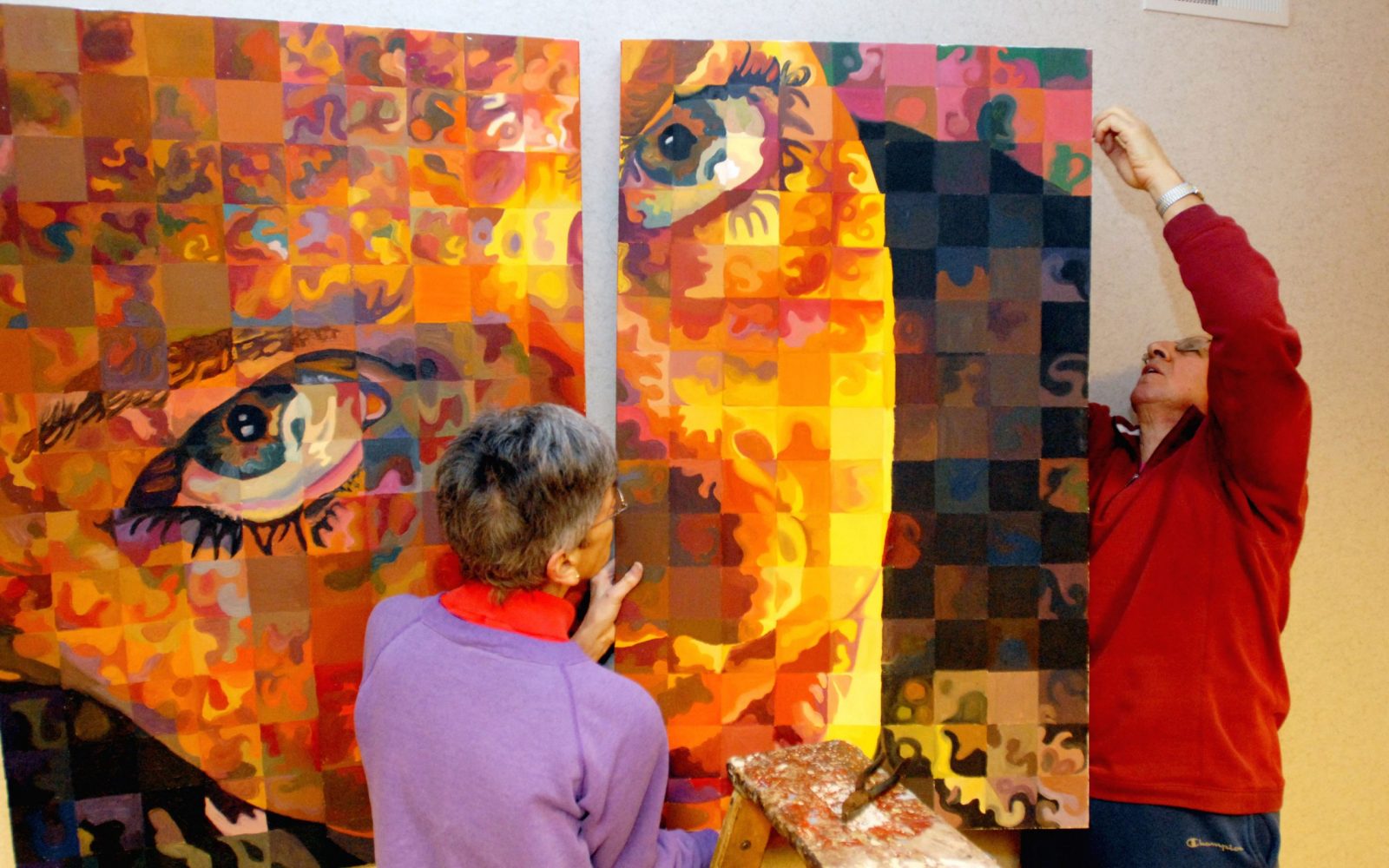 Dee Valvano (left) and her husband Vince hang artwork for a Feb. 8-10 show at St. Mary Parish in Canandaigua.

CANANDAIGUA — Dougherty Hall, located in the basement of St. Mary Parish, was transformed into an art gallery the weekend of Feb. 8-10.

As music played softly in the background, parishioners wandered from piece to piece, taking in more than 60 works created by 33 local artists. Most of the works were created by fellow parishioners around the theme of “Light, Life and Water,” which was culled from the Gospel readings of the third, fourth and fifth Sundays of Lent, according Dawn Burdick, who organized the show.

Each of the show’s paintings, drawings, sculptures, wall hangings and other objects related to at least one of the three motifs, Burdick said. The show, which organizers plan to present annually, featured a number of photographs and paintings of oceans, lakes, waterfalls and other aspects of life in nature. Some artists contributed pieces they’d produced in the past, but Burdick said a number of people created artwork specifically for this show after she began advertising it in October or November.

The idea for the show was born last fall when a mother mentioned to Burdick that her quiet teenage son probably wouldn’t feel comfortable being a lector at Mass, but would willingly share his artistic talents if given a venue, Burdick said.

“We ask people to sing and play instruments and share their talents that way, but they don’t often get to share their artistic talents,” Burdick observed.

Parishioners and community members of all ages contributed to the show, Burdick added. Four-year-old Isabel Bulling’s pencil drawing of her family was featured prominently on one table, while another table was devoted to the works of Maryknoll Sister Marie Pierre Semler. Sister Semler passed away in 1993, but her nephew submitted some of her pieces for the show, Burdick said.

When parishioner Bob Cirre heard about the show’s theme, he looked back over drawings he’d produced more than 30 years ago and selected four to submit. “Solitude” depicts a sailboat alone on an empty sea, while “Night Light” shows a beam of light from a lighthouse illuminating the water below. Cirre and his wife, Connie, visited the exhibit Feb. 10.

“For me it’s been a humbling experience,” Cirre said as he looked around at the other pieces sprinkled throughout the room. “It’s very tastefully done. I love the music in the background and the way it’s all split up. There’s a degree of solitude and dignity about the whole thing.”

Cirre said he and his wife plan to attend next year’s art show too, regardless of whether they submit their own pieces for that show.

“It’s inspirational, it really is,” he said.

Fellow parishioner and artist Liz Gilges headed over to the art show after attending 9 a.m. Mass Feb. 10 and said she was impressed by the turnout. Although many people visited the show after weekend liturgies, more than 300 people had already visited the show by 4 p.m.on Saturday, Burdick said.

“It’s been amazing. I never expected this many people, and everyone has said, ‘You’re doing this again next year, aren’t you?'” she said. “People asked if we could keep it set up all week. I didn’t expect for people to ask for that.”

Burdick said Scripture probably will be the theme of next year’s show as well, since the Diocese of Rochester’s Spirit Alive! spiritual renewal also will focus on Scripture next year. Such a theme will give people a lot of freedom to create various interpretations of and reflections on their favorite Biblical stories and passages, she said.

Gilges’ two oil paintings in the show related to the themes of life and water. “Boys On the Shore” depicts her three sons running through the surf on a beach in Brazil, with a mountain looming out of the sea behind them.

“What could be more exuberant than boys playing in the surf? It represents life to me, and living life,” Gilges said.

In the other painting, two small children sit barefoot atop a horse bowed to drink in the middle of a lagoon in Argentina. Gilges painted the piece from a photo she took when her family stayed at a horse ranch in Argentina one summer when the area was experiencing a severe drought. The pictured lagoon was the only one that didn’t dry up, she said, and alligators were plentiful there at night.

Several families arrived at the show around 5 p.m. Sunday for Families at Five, a regular component of the parish’s religious-education program. Burdick and catechetical leader Deacon Claude Lester incorporated the show into the program by asking participating families to read the three featured Gospels and then discuss ways the artwork related to the readings. After viewing the exhibits, participants created their own reflections using art supplies set up at several tables at the back of the room.