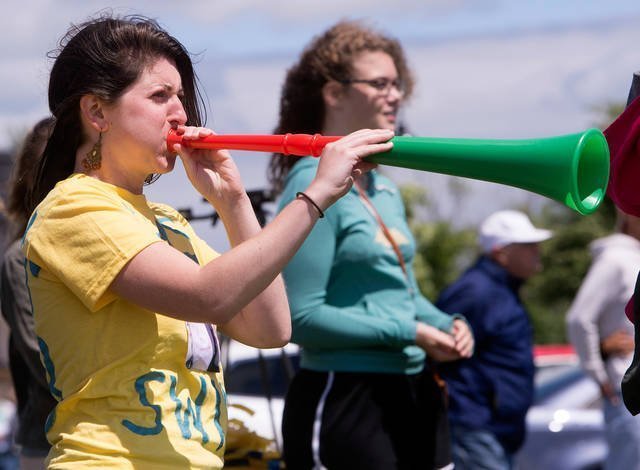 Mary Nicholas sounds a horn as Richard Henahan nears the end of his swim along the length of Canandaigua Lake Aug. 5. The swim raised funds for Mary’s Place Refugee Outreach in Rochester. Courier photo by John Haeger 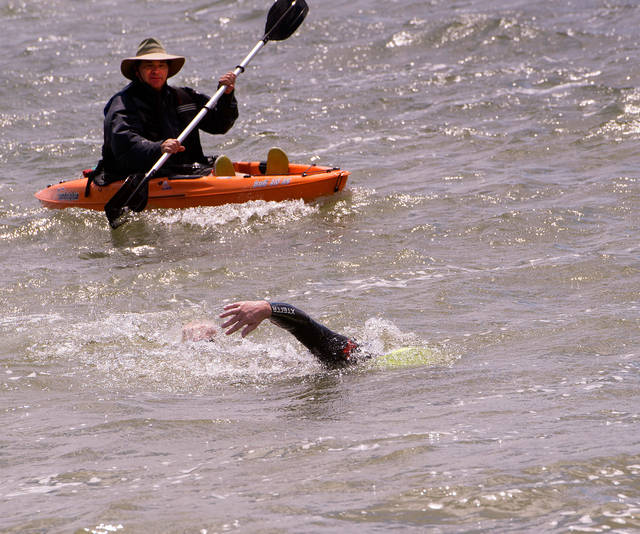 Richard Henahan nears the end of his swim along the length Canandaigua Lake Aug. 5. The swim raised more than $5,000 for Mary’s Place Refugee Outreach in Rochester. Courier photo by John Haeger 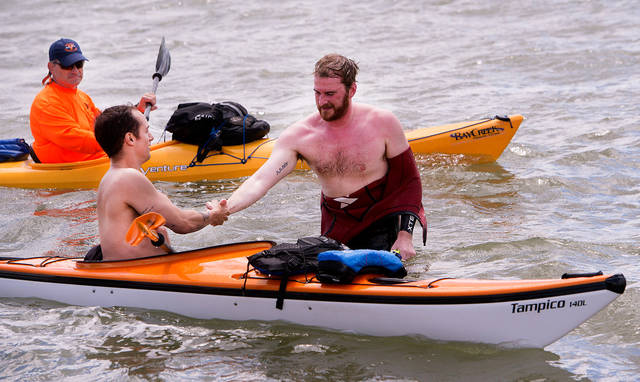 Richard Henahan shakes hands with one of the kayakers who accompanied him Aug. 5 as he swam the length of Canandaigua Lake to raise funds for Mary’s Place Refugee Outreach in Rochester. Courier photo by John Haeger

Ricky Henahan dove into the southern end of Canandaigua Lake from the Woodville Boat Launch in South Bristol at 6:15 a.m. Aug. 5. He headed due north, and at approximately 2:15 p.m. he reached Kershaw Park in Canandaigua at the lake’s northern tip.

Not only did Henahan get quite a workout that day, but he also raised more than $5,000 for Mary’s Place Refugee Outreach, based in Rochester, and an equal amount for The World Wide Tribe, an agency that works on the ground in refugee camps around the world.

“I am in awe of what he was able to accomplish and immensely grateful for the donations he was able to secure,” remarked Charlsey Bickett, executive director of Mary’s Place, which was founded in 2009 as an outreach project of Rochester’s Cathedral Community.

The funds Henahan raised will allow Mary’s Place to continue to offer refugees a variety of outreach services and programs, including food and clothing distribution, English-language classes, job-skills classes and casework services, Bickett told the Catholic Courier on Aug. 18.

A native of West Irondequoit, Henahan has been interested in the issues facing refugees since 2002, when he met a family of refugees while working on an assignment for one of his classes at the University of Tennessee. He’d been instructed to go out and interview people he didn’t know, and the first people he met when he walked into a Tennessee restaurant were members of a family who’d fled their Palestinian homeland.

Henahan found the refugees he met to be very humble, friendly and loving people, and was surprised to find that the general public doesn’t always share the same views of refugees. Refugees receive “a lot of bad press,” a situation which has worsened in the last few years, Henahan told the Catholic Courier on Aug. 3.

“Definitely in the media today there’s a lot of misunderstanding about these people, who for the most part are very loving, humble, kind people who just want to start a new life,” he said.

After reading about the challenges faced by refugees both in their own homelands and after they’ve arrived in the United States, Henahan was moved to take action.

“I didn’t like just reading about it and not doing something. I’m very passionate about it and felt like I should do something to try to make a difference,” he said.

An accomplished swimmer, Henahan took stock of his skills and considered several possibilities before deciding to complete a long-distance, open-water swim in order to raise awareness of the refugee crisis and funds for organizations that assist refugees locally and in their homelands. The swim also would be a new challenge for Henahan. Although he was a Division I All American swimmer in college and competed in the 2008 and 2012 U.S. Olympic Trials, his expertise was in sprints rather than distance events.

Henahan began training for his 15-mile swim during the summer of 2016, and by the time he entered the water on Aug. 5 he knew he could accomplish his goal. The first half of his eight-hour swim was relatively easy, he said.

“The wind was at my back for the first half, but it got really choppy towards the end,” Henahan said after completing the swim. “The wind shifted and for the last three miles I felt like I was swimming in a bathtub. There were waves coming from every direction. It rained for a little bit, but I didn’t really notice it too much.”

The weather conditions actually forced Henahan to veer from his intended course straight up the center of the lake. He hugged the shoreline to avoid the choppiest waves in the middle of the lake, and that change added approximately two miles to the length of his swim, he said.

By the last mile of the swim Henahan’s shoulders were starting to give out, he later recalled, but he got a second wind as he approached the Canandaigua shoreline and saw a crowd of approximately 50 people waiting for him at Kershaw Park.

“I was just kind of in shock at all the people that came out to support me. It was a really great way to end it,” Henahan said.

Bickett and Mark Hare, chair of Mary’s Place’s board of directors, were among those waiting for Henahan at Kershaw Park. Bickett said she was grateful for Henahan’s efforts to raise both funds for Mary’s Place and awareness of the plight of refugees.