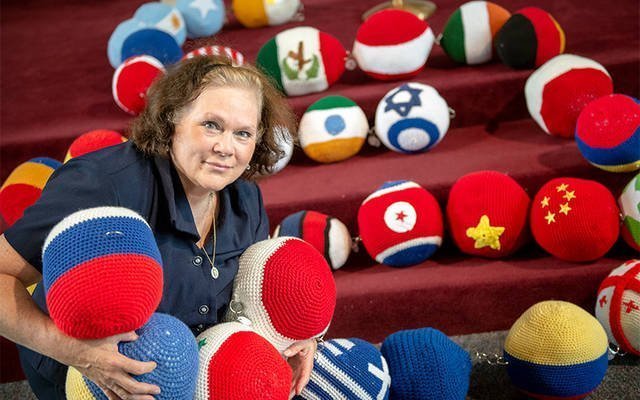 Gina Mangiamele’s vision of praying for peace around the world turned into The Giant Mary Queen of Peace International Rosary Project, a 55-foot-long, five-decade rosary featuring beads crocheted to depict the flags of different countries. 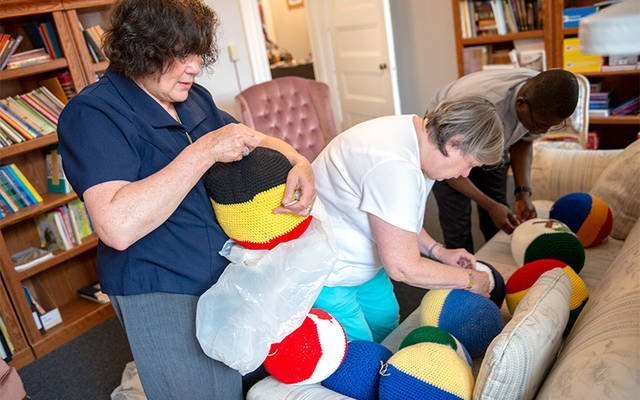 CANANDAIGUA — With the substantial acts of violence and hatred plaguing the country and world, Gina Mangiamele found that she had a lot of anxiety. Every Saturday, she prayed the rosary with her morning prayer group, looking for ways she could help bring about peace.

“I was doing the rosary and this (thought of bringing peace) came into my mind. Not only in my mind, but in my heart. I genuinely believe that this is something that God wants me to do,” Mangiamele, a parishioner of St. Benedict Parish in Ontario County, told the Catholic Courier June 28.

That notion turned into Mangiamele’s idea for The Giant Mary Queen of Peace International Rosary Project and her vision of praying for peace around the world.

The goal of the project is to create a 55-foot-long, five-decade rosary featuring beads crocheted in the flag colors of different countries. Fifty-three countries will make up the Hail Mary beads, with five plain blue beads serving as the Our Father beads. Mangiamele said the Vatican flag will be the first Our Father bead, and the beads representing the countries of Micronesia, Argentina and Somalia — which all have light-blue flags — will be the first three Hail Mary beads. All the beads will be connected together using medium-sized book rings.

Once Mangiamele drew up the business plan for the project and created the pattern for the rosary, she began crocheting. Even though she is an avid needlecrafter and was crocheting an average of two to four beads a week, she knew she needed help. She placed a notice on the Web forum CatholicAnswers.com, looking for women willing to crochet beads. She received dozens of responses from women from all over the country — including as far as North Dakota and Texas — who were interested in making beads for the project.

“I’m so overwhelmed with the generosity,” she said fighting through tears. “It has been amazing.”

In addition to CatholicAnswers.com, Mangiamele also sent information about the project to parishes around the Diocese of Rochester.

Jean Burlingame said she learned about the project through St. Benedict’s bulletin.

“It just popped out at me,” the St. Benedict parishioner told the Catholic Courier June 28 while holding the France bead that she had crocheted. “I love the Blessed Mother, and I thought this is something I can do for her.”

Mangiamele contacted each of the interested crocheters and sent them information, including the single crochet pattern. The women were able to select the countries they wanted to crochet beads for.

Mangiamele said some countries were specifically chosen for inclusion in the rosary and have special significance. For instance, Kathy Tanner of St. Joseph, Mo., chose to crochet the bead for Mexico because she belongs to Our Lady of Guadalupe Parish, Mangiamele said. Mangiamele crocheted the Ghana bead because Father Clifford Dorkenoo, parochial vicar at St. Benedict, is from Ghana, and the Belgium bead for Father Michael Costik, parochial administrator at St. Benedict, who went to seminary in Belgium. Other places, like North Korea and South Korea, were included in the rosary as places where peace is needed, she said.

“As we pray for peace, we are going to pray that these two countries come together, end the Korean conflict, bring peace and denuclearization,” she said.

Mangiamele told the Courier in an e-mail that 40 beads have been completed as of July 23, and she hopes to have the rosary finished by early August. The rosary will be assembled and blessed Aug. 22, which is the Memorial of the Queenship of the Blessed Virgin Mary.

“It just seemed appropriate that we pray on this rosary for the first time (on this feast day),” Mangiamele remarked.

From there, Mangiamele hopes to bring the rosary to other parishes in the diocese, as well as to parishes across the country.

“I’m hoping we can take it locally at first, and then I want this to be an ongoing, continuous project where we just keep praying for peace,” she said.

“I’m hoping that as we travel from parish to parish that other parishes will have people with needlecraft skills and will be able to duplicate this, so we end up with a lot of these giant rosaries around,” she added.